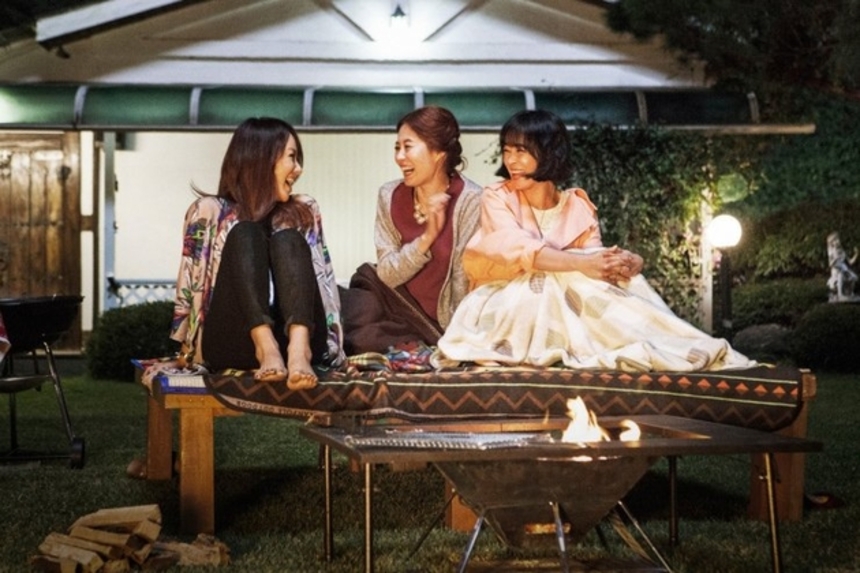 As a fan of Moon So-ri and production company Myung Films, I felt that I should be excited about Venus Talk, their first collaboration since Im Sang-soo's excellent A Good Lawyer's Wife (2003). But on the other hand, with its middle-aged female cast and heavy Sex and the City parallels, I was never this film's intended audience. Given the lack of strong female roles in today's Korean film industry, I'm glad to see a major film like this come along but that still doesn't mean this particular offering held much appeal for me.

Independent TV producer Shin-hye (Uhm Jeong-hea), confident housewife Mi-yeon (Moon So-ri) and single mother Hae-young (Cho Min-soo) form a trio of 40-something friends that go through the ups and downs of their lives and loves in modern day Seoul. Following a drunken work party Shin-hye ends up in bed with her much younger colleague and spurns his affections when he wants to become more than a one-night stand. Mi-yeon likes to get frisky with her husband but she doesn't know that he secretly takes viagra as her libido takes its toll on him. Meanwhile Hae-young, who lives with her grown-up daughter who is about to get married, begins dating a carpenter.

Over the last two years the Korean film industry has experienced remarkable growth and part of that has been attributed to an audience that has extended beyond its typical 20s and 30s spectator pool to include far more viewers in their 40s as well as 50s. Given these older filmgoers' tastes and the dearth of middle-aged female characters on Korean screens, Venus Talk makes a great deal of sense, but only for certain viewers.

All three leads have done stellar work in the past, but following Moon's indie cred for Lee Chang-dong's Oasis (2002) and various Hong Sangsoo films, Cho's leading role in Kim Ki-duk's Venice Golden Lion recipient Pieta (2012) and even Uhm for parts such as Princess Aurora (2005), Venus Talk is hardly the best work on any of their filmographies. Yet they do gel quite well when together which makes it a little confusing that they are mostly separated into their respective narrative strands. It may be that it was cheaper not to have all three stars appear at the same time too often but it's a shame to be deprived of their chemistry for most of the film. It also makes for episodic and at times clunky viewing.

Though it presents itself as a racy comedy about older women owning their sexuality, Venus Talk is actually quite modest, save for some sex talk that I couldn't always quite follow (my Korean's getting there but dialogue-based films can still be a little fast for me). Behind the scenes, the camerawork and editing are little more than functional (though by Korean standards that still means they're quite good) with the only real effort coming in the costume and production design departments, which seek to paint a sophisticated image of a modern, affluent Seoul.

Director Kwon Chil-in is well versed in romantic fare, having previously made films such as Singles (2003), Loveholic (2006) and Love On-Air (2012), and as such Venus Talk is familiar territory for him. Leaving the heavy lifting in the hands of the film's stars, Kwon opts to keep things simple by only gently tugging on the director's reins. Relying on its strong triumvirate of lead performers, Venus Talk should satisfy, though not thrill, its intended audience. Beyond that however, this middle-aged dramedy may not be such an enticing proposition.