Review: STRANGER BY THE LAKE Explores An Uncanny Attraction

It is hard to know exactly where to begin when it comes to discussing Alain Guiraudie's psychosexual thriller Stranger by the Lake. This controversial film was strangely given an R18+ rating and uncut in more conservative places like Australia. However, despite its high level of sexual content, there is much more to ponder.

It is summer in France; a mysterious but beautiful spot in the woods hides a stunning lake. A makeshift car park a few meters away reveals a new arrival driving to what will be his usual routine. His name is Franck (Pierre Deladonchamps) and he is looking for love, lust and passion. It is quickly revealed that this serene spot is used as a cruising locale, where gay men of varying shape, age and circumstance lurk and scope out a potential lay. It is here that Franck witnesses a murder, but instead of running from danger he purposely falls headfirst into it, and into an intense relationship with the murderer Michel (Christophe Paou).

Before this all begins, however, the uncanny feeling is already there. Guiraudie creates an immediate queasy tension amidst the bright summer day and swooping wind. There is no music in the film and for the most part not much dialogue either. Like a National Geographic Society documentary, we observe, through Franck, these roaming naked men; vulnerable but full of secrets and agendas.

Regarding the uncompromising frankness, there is certainly a desensitization that occurs watching the film and it is not long before hanging penis and scrotum becomes the norm. This utter comfort and peaceful place is starkly contrasted by the brazen and promiscuous nature of these visitors. The film works because of this - but to feel unsettled by how grossly misused this place is barely touches on the awkwardness of the film. Later, when Franck roams the woods, he encounters questionable men and perverts, but it is Henri (Patrick d'Assumcao) who we initially focus on.

Alone on the beach, not naked or engaging with the other men, this middle-aged man Henri is filled with death drive. His presence on the shore makes no sense, and he is quickly befriended by Franck, who as we soon learn is attracted to unpredictable and dangerous encounters. As Henri sticks out so much, there is a thought that he may be the killer, but Guiraudie eschews all genre convention by simply later showing the full murder from a distance (through Franck's eyes) as well as the murderer. Michel calmly makes his way back to the shore and then to his car after committing the deed. There is no telling where the film will go from here, Franck watches in the darkness, but not with fear in his heart. 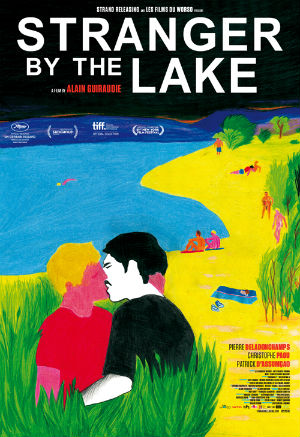 The location itself could be anywhere, the days frequent as summer moves on without a beat, perfect bright clear skies every day. Is each day a weekend? Time makes no sense in this otherworld. To complicate matters, there are zones, the shore and the forest, crossing the barrier of cruising to casual sex. It is this geographical isolation and definition that truly makes viewing Stranger by the Lake an odd experience.

There are scenes of utter beauty, a sunlit lake, the gentle breeze of leaves overhead but there are also terrifying intense moments of fear and confusion. Guiraudie utilises natural darkness in these scenes, with no camera trick in sight, and these work remarkably well.
The intense feeling of the film spills over into the passionate, chaotic relationship Franck strikes up with Michel. The film pulls no punches and the explicit lovemaking is not shied away from; from on-screen ejaculation to a brief oral sex scene and the more shrouded penetration scenes, the film does as much as it can to create the genuine scenario, and this pays off immensely later.

Stranger by the Lake is an intense watch, it delves into a destruction that seems far too realistic on-screen and all the more disturbing for it. Contradicting the gorgeous innocence of nature is what lies beneath the murky depths of the lake; a truly chilling film.

Review originally published in slightly different form during the Busan International Film Festival in October 2013. The film opens at the IFC Center and the Elinor Bunin Munroe Film Center in New York on Friday, January 24, and at Sundance Sunset and Playhouse 7 in Los Angeles on Friday, January 31.

Stranger by the Lake

Do you feel this content is inappropriate or infringes upon your rights? Click here to report it, or see our DMCA policy.
Alain GuiraudiePierre DeladonchampsChristophe PaouPatrick d'AssumçaoJérôme ChappatteDramaRomanceThriller

More about Stranger By The Lake