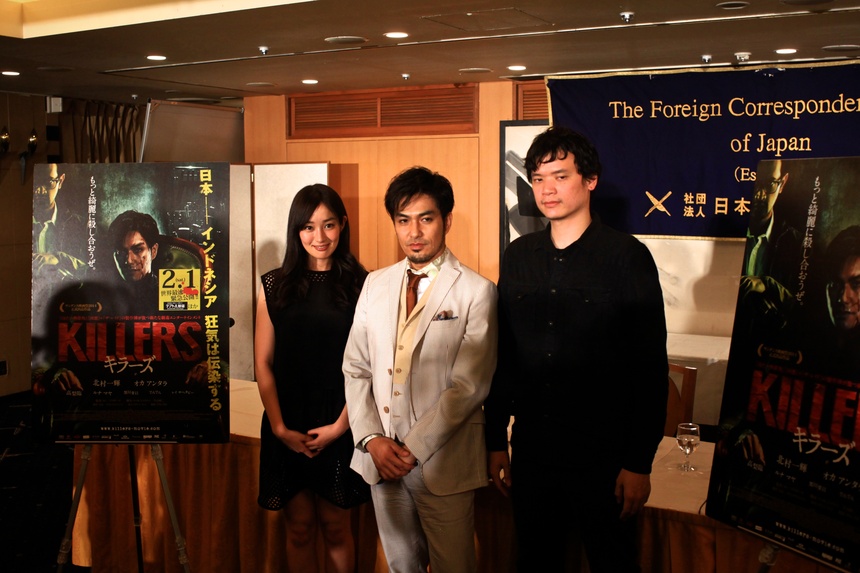 After it's world premiere at Sundance director Timo Tjahjanto brought his latest film, Killers straight over to Japan for a screening ahead of it's February 1st release. Tjahjanto, one of half of the Mo Brothers with his filmmaking partner Kimo Stamboel, was joined by the film's stars, Kitamura Kazuki, who plays charismatic killer Nomura, and Takanashi Rin who plays a young woman that the murderer feels he can identify with.

The film follows two very different men, connected by the fact that they have both taken up the act of killing. Nomura lives in Tokyo where he picks up girls, and records himself brutally murdering them, after which he posts the videos online. Bayu lives in Jakarta where his marriage is in trouble and his career in journalism is faltering after he fails to bring down a powerful and corrupt criminal. Bayu, in very different circumstances is also forced to kill and the two men find each other online.

The film was made as part of a unique co-production between Japan's legendary Nikkatsu studio and Indonesia's Guerilla Merah-Films, with The Raid: Redemption's Gareth Evans in an executive producer role. After a screening of the film the director and stars hung around to answer a few questions on the development and production of the film.

Q. This is one of the first big co-productions between Japan and South East Asia, how did it all come about?

Timo Tjahjanto (TT): The project began in 2009 when we finished Macabre, our first feature film. At that time a Japanese producer by the name of Ushiyama Takuji approached us. He offered us a story that was quite interesting. He said, "Let's make another slasher film with the concept of two guys in clown masks having a killing competition." Even now I feel the idea is very tempting, it would be such a fun project, for the child in me especially, but at that time we wanted to move away from slasher films because we had already done Macabre, which is kind of a love letter to the genre.

We said, what if we do something that is more character driven and hopefully more relatable in today's world? After that, from 2009 all the way until 2011we kept up the story and I wrote the script with Ushiyama-san.

After the long search for funding, because as you see it's not an easy film to grasp even in terms of trying to find the right financier, after like two years plus we were trying to find a company that would love to finance this film. Fortunately that's where Yoshinori Chiba and Shinjiro Nishimura from Nikkatsu came in, because Takuji Ushiyama gave the script to them and they became very interested in a co-production. From the point were Nikkatsu came in, which is somewhere around 2010/2011, things went smoothly we got our financier from Indonesia and we shot in 2012.

Q. What were the main challenges for the actors?

Kitamura Kazuki (KK): The thing I found to be very important was to have the opportunity to be directed by a foreign director, that was the most important thing for me as far as this project was concerned. Before embarking on this challenge I read the script and it was very difficult to understand, I first had to ask the director what he wanted to say and what he wanted to make and based on his answer I decided to embark on this challenge.

RT: I found this very challenging, at first I agreed to do this because, based on the script I was not in any violent scenes but seeing the final film I was quite surprised (by the violence) and I was very scared to be honest. However, the second time I saw it I found an entertaining element to the violence and I felt excited and was really able to enjoy the film.

Q. What problems did you have shooting in Indonesia, and what was your impression of the country?

KK: My initial impression of Indonesia was Bali and probably most Japanese people are like that too. For this shoot we first shot in Japan for about a month and we then went to Indonesia, I can't remember how long it was, a week or two weeks but I went to Jakarta for the first time and the first thing I was surprised with was the traffic-jams, there were so many cars.

It's usual for us to wake up very early around 5 in the morning to start shooting but in Indonesia I had to wake up at 3am and leave the place at 4am in order to get to the set on time and start shooting. That was very difficult but at the same time I was very stimulated by the city itself, there was this interesting energy, there was hardly anybody walking on the street it was mostly cars and I had the opportunity to see and ask questions about the culture of Indonesia.

On the set I was impressed by the fact there were many young staff, younger than the average Japanese crew on the set and we probably shot about triple the amount of footage than in Japan, which was very impressive.

Also, I'd like to add one thing about the way films are shot in Indonesia. In Japan there is such a rigid structure in the production team and the production process but in Indonesia I felt that everyone was focused on how to shoot or how to create a film that was best for audiences. They were very innovative, came up with lots of ideas and were rather free; they were not structured or rigid about the way in which to shoot the film. That was something that was very educational for me.

Q: During the screening people were laughing during the violent scenes, what do you think about this kind of reaction to the movie?

TT: For me personally what I try to show with the violence is, generally, I want a non-glamourised portrayal. Because the film itself is kind of schizophrenic in nature, so whenever we go to Nomura's scenes especially when he does violence, in particular towards somewhere in the middle of the film, we made a conscious decision that we need to be living inside his head. Therefore, especially with the scene in the nightclub we want the violence to be slightly stylized but still brutal because we are trying to portray this character as somebody who is narcissistic, as somebody who is a lot of ego therefore he sees himself entering the nightclub almost as a rock star figure on the hunt for his victim. Generally, if there is something funny in the film I think, if it is not accidental, it is probably intentional because you realize this is a very bleak, depressing film and so, especially with Kazuki Kitamura's character, you have to inject a certain black humour into it because otherwise I don't think anybody who buys a ticket will be happy at all!

KK: Actually, in the scene where Nomura leaves the nightclub and he's drenched in water and he's trying to put the corpse of the young girl into the car, I almost started laughing. While I was acting the scene I thought the humour of the scene is all calculated by Timo and I thought the more seriously I acted the more humorous it would become and that's probably his thinking as well. The last scene also has some humour in it too.

When I was watching this film myself there were scenes were I wanted to laugh and I was wondering if it's appropriate or not, and this is probably Timo's calculation and his sense as well. If you say the audience has that kind of reaction and laugh watching this film I'm very happy to hear that.

RT: I myself had scenes where I laughed while filming them and at the same time I realized that the character of Nomura and Bayu are so different from each other you almost feel sad watching Bayu because he's so sensitive it almost breaks your heart watching him, whereas Nomura is always calm and cool. The funny thing is these two characters each have something in common, they are connected, and their connection is portrayed through violence, which I thought was very interesting. I thought the music and image was very cool too.

I also laughed when watching the scene where he's trying to put the young girl into the trunk and when I was laughing I thought maybe I'm laughing because I know the actors themselves but when I hear the audience laughing today obviously they don't know the actors so I'm happy it had that kind of reaction.

I think there are two answers in this, the first is that the child in me just wants to work in Japan with Japanese people, that would be a dream come true for many filmmakers! The second is I really wanted to explore certain themes. At the time, in Indonesia when I was writing it I was sensitive to my surroundings, I was still adjusting to my time living in Jakarta especially as I was about to become a father myself, I think there's a lot of anger and frustration that came from me when I was writing the script, so I become really aware, almost paranoid of the violence that surrounds us. Even now I can still feel that impending violence is still touching on us. If you look at the news most of it is always tragedy and always this sort of sad news and in the end I wanted to tell this story of mans dependency on violence, because we can all relate to that subject matter. The two examples I always give is why, whenever there is a car accident do people slow down to see? The second is why every time somebody blares there horn on us do we want to choke that guy?! It's always the two extremes that revolve in my head and the story finally expanded to these two extreme characters that can't let go of their violent urges. I hope, in a way, the film portrays them.
Tweet Post Submit

Do you feel this content is inappropriate or infringes upon your rights? Click here to report it, or see our DMCA policy.
interviewkazuki kitamurakillerskimo stamboelmo brothersrin takahashitimo tjahjanto