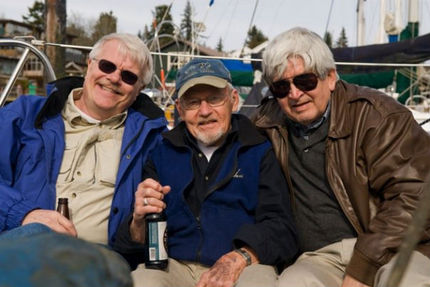 An antidote to the steady stream of movies about aimless twenty-somethings, Old Goats revolves around a trio of older gentlemen dealing with issues that never go away: the fear of commitment and intimacy, the yearning for an adventurous life, and the desire for love and friendship.

Enacted with amateur brio by Britton Crosley, Bob Burkholder, and David VanderWal, the trio, conveniently named Britt, Bob, and Dave, are at different stages of retirement life. Dave has been retired for about six months; he has a lovely wife and a beautiful home, but he has not yet adjusted to retirement. He becomes friends with Bob, who is quite a bit older but is still feisty and energetic and busy; in addition to various volunteer activities, he also has an active love life as a single man. In between is the sad-sack Britt, who has lived in a tiny boat for 30 years and is finally ready to take a long solo cruise.

But on the morning that Britt is due to depart, he backs down from his ambitious plans, and must chart a new life course with little direction. Bob, who has led an adventurous life, is disdainful, while Dave is much more sympathetic and encourages him to take up new hobbies.

Granted, on paper this does not sound like the most promising basis for a movie. The sketchiness of the plot, however, leaves room for what is most important to writer/director Taylor Guterson, who also photographed, edited, and co-produced, namely, the characters. Bob is the most colorful, the most profane, the most charming of the three, yet he's also the one who is most clearly in need of others. He has an innate inclination to overshare, which has led him to write a 600-page memoir of his life, which seems to spend far too many pages on his sexual conquests. And he also worries about what others will think of him.

The unkempt, timid Britt makes the longest journey. He's afraid of new things, but he reluctantly forces himself to accept opportunities when they're thrown at him, even though he'd rather sit in his cramped boat, eating a slice of toast for dinner and reading a book. Dave, who seems to have the most material advantages, goes along with his wife in order to get along. He'd rather spend time jawing with the other "old goats" at their weekly get-togethers than spend quality time with his longtime wife. He has a desire to do something different, but in his more polished, put-together manner, he lacks even the minimal self-assurance that Britt possesses.

This is a movie of wry moments and candid observations. It's not a world in which old men cozy up to young women, or spend the majority of their existence worrying about their children or fretting about mortality, or cover their ears when they hear rock or rap. In fact, people younger than retirement age are only seen and not heard, which is refreshing in itself. Occasionally, there are jokes made at the expense of techno-phobe Britt, but otherwise Guterson sticks to exploring these three men, their relationships with each other, and their difficulty in understanding women, which makes Old Goats an altogether rare and entirely welcome movie.

The film is now available on DVD via Music Box Films, and is available to watch via various Video On Demand platforms. Apparently shot on digital video, the picture is as clear and clean as expected for a recent production. The extras are fine for what they are, though I wish some comments had been included from the director as to the genesis of the project, or why he chose to focus on three men far older than himself,