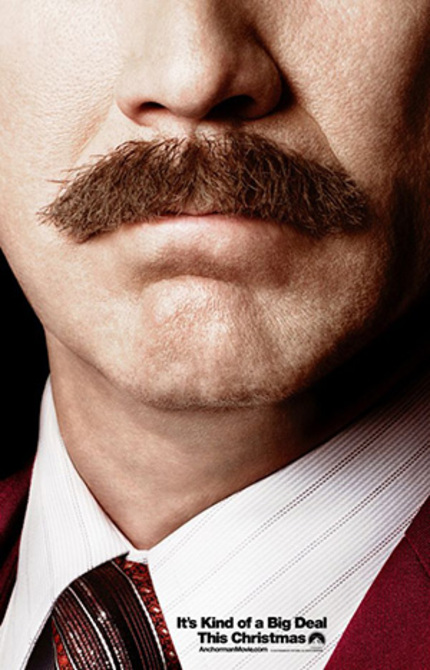 But only one had a mustache that would provoke eruptive disturbances in the the genitalian region of even the most ascetic of deities, causing songs to be sung in praise by the simple, common folk who consider him far more than a mere mortal with salon-ready hair, piercingly intelligent eyes and his frame cloaked in a flame-encouraging suit.

We are told by the title that The Legend Continues, and by any critical measure you can be assured that the story does, in fact, continue. There's a deep, profound, spelunking-the-bottomless-truthiness to this title. You're being given what you've getting - right there, smack dab in the middle of your screen, a screen shaped more long than it is tall, mustache like, as if Plato's dream of the cave was leading up to our encountering a man nursing a shark from a bottle.

But like the film itself, I've gone too far, too quickly. For Anchorman 2 opens, as all films should, with a man battling a sea creature. From there we are lead through the lows and highs of a figure coming to terms with his own capabilities. We travel to Sea World, we dine with affable African-Americans, we even visit a lighthouse and watch the consumption of unusual creatures.

Throughout this legend, this parable, this ballad to early '80s excess, we're treated to a glorious score of Yacht- and Soft-Rock classics befitting such an adventure. Mellifluous is a good word to describe this legendary adventure, or indulgent. Whatever, it will come as no surprise that the tale of a man named Burgundy can be considered colourful.

Yet I am dancing around the issue at hand - is this a Legend worth apprehending? Well, to the doubters, I only need to quote from Ron with one of the film's finest readings, muttering under my breath, "Fuck You".

Harsh? Perhaps. Yet this is no child's play here, even if there is all of a sudden a child to add to some of the more awkward moments. This is not a film that can be treated by mere mortal standards of taste, decency, or whether or not it coherently presents a comedic narrative in a pleasing or entertaining way. This film is more than that. Or not. I may have lost track when the finale occurred, as the hyperbole ratcheted up to levels that left my mouth agape and my critical faculties simpering. "Was this still funny?" I thought in a moment of weakness. Was this simply madness run wild, a near two-hour mess of set pieces cobbled together to placate fans of the original with a series of broad witticisms and stock shtick?

Like some sickly dragon come to steal my mindbrain, I slew those doubts, for I knew what I was seeing was more than a mere film about a guy with an ability to read from a prompter convincingly.

This is the story of a hero with a posse, and once again the likes of Brick, Champ, Fantana and the puppydog Baxter are there to provide solace and comfort. Like any good continuation, there's an expansion of scope, for when Veronica's new opportunities come at the expense of Ron's own future, he must delve into a whole new world where the very definition of what news is transmogrifies into something new, unholy, and yet embraced by a wide audience.

This might speak to the film as a whole, this unholy-yet-embraceable assemblage. For like sitting atop a mechanical bull or a particularly vigorous evening of lovemaking, this is a film you simply hang on for the ride. And this is a very special ride. This, dear friends, is a ride with a mustache.

The original legend was bifurcated into two tales - one, the most commonly appreciated, told Ron's tale of his life as an Achor-man. But the second, the Wake Up Ron Burgundy iteration, provided in some ways greater scope to the man's history. We saw in Ron's battles with extremist organizations his bravado, as well as his cunning ability to save the day in the end. We get a taste of that in this chapter, and it will be delightful to see what other adventures our hero has in store for us.

For while we are given much, we are still left wanting more. We see our hero overcome blindness in its many metaphoric forms, we see love come to even the most awkward of participants. There is an almost Shakespearean flavour to the work, in the sense that there are words and actions and weddings and dogs and people.

And there is, as already mentioned, a shark, a leviathan to be both coddled and come-to-terms with, an inner and outer killing machine that may need to be tamed in order to see what really matters in life. The battles will continue, the stories will continue to be told, the welcome will continue to be overstayed, and the metaphors will again be struck over the head.

Anchorman 2 may not be the best film in the history of forever, but it presents itself like it is, and that is somewhat refreshing. This is a film unafraid to stick a nipple into the maw of a writhing shark just to see what happens, unafraid to both give and take, to both please and betray. It's a film that's fearfully fearless. It's a story to be contended with.

It is a legend that has continued.

Do you feel this content is inappropriate or infringes upon your rights? Click here to report it, or see our DMCA policy.
anchormanpaul ruddreviewsteve carellwill ferrell

It's a perfectly cromulent word...