Review: THE HUNGER GAMES: CATCHING FIRE Kicks It Up A Notch, Sets the Stage For A Grand Finale

Suzanne Collins' Hunger Games trilogy is a great read if you're into that sort of thing (reading), and it's shrewdly constructed. The first book, memorably adapted last year into a star-making vehicle for Jennifer Lawrence, focuses on the Hunger Games themselves, an event in a dystopian future America in which two children from each of the 12 districts are put into an arena and forced to fight to the death. (It's like American Idol, only fun to watch.) But the book also lays the groundwork for a larger story, one that's not just about one girl's harrowing experience in the Hunger Games but about the government that requires it and the popular uprising that is bound to come.

That groundwork is important because it establishes that there's still more for our heroine to do even though her Hunger Games experience is over. We expect Part 2 to be a continuation of Part 1, not a repeat of it. We're primed for a story that will be about the Hunger Games society without necessarily putting the characters we know into the Games again.

And then Collins does it anyway. She gets us back into the arena as a means of advancing the larger story. She has it both ways -- and it works. You don't roll your eyes in Catching Fire when Katniss Everdeen has to participate again in what was supposed to be a once-in-a-lifetime ordeal. Given what we know about the society and its cold, cruel leader, President Snow (Donald Sutherland), the development makes sense when it's explained. And now somehow the stakes are even higher than before -- and the stakes were life-and-death before!

The fleet-footed movie version of Catching Fire, directed by Francis Lawrence (I Am Legend), captures the spirit of its book even better than the last film did. It brings out the saga's central conflict -- despotic President Snow versus champion of the people Katniss Everdeen -- and shows how resourceful people can work within the system to bring it down. The Hunger Games, with their ubiquitous TV coverage, are Snow's very public way of reminding his subjects not to mess with the government. But in Catching Fire, Katniss and her allies use this constant media coverage to their advantage, turning Snow's own propaganda tools to fight against him.

Note that the central conflict does not concern which boyfriend Katniss will choose, despite what Entertainment Weekly would have you believe. I almost think the blandness of both characters, Gale (Liam Hemsworth) and Peeta (Josh Hutcherson), is intentional, meant to keep us from feeling like the love triangle is the whole point. (I almost think that.)

As Catching Fire begins, the effects of the last Hunger Games are still being felt. Katniss has some of the PTSD that affects most of the Games' survivors. Gale is sulky over how she has to pretend to be in love with Peeta for publicity's sake; Peeta is sulky because he knows she's only pretending. The stunt that Katniss and Peeta pulled embarrassed the Capitol and inspired small bursts of rebellion in the districts, which Snow is eager to quash. In a sinister face-to-face visit, he lets Katniss know that she and her loved ones will suffer the consequences if any more of her public actions have a revolutionary tone to them. 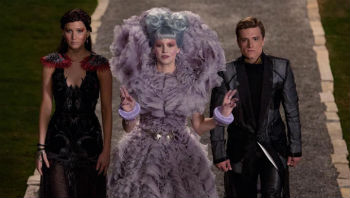 The plot brings Katniss and Peeta back to the Capitol, where they interact with other past winners, including peacock Finnick Odair (Sam Claflin), mute old lady Mags (Lynn Cohen), babbling loon Wiress (Amanda Plummer), electrical genius Beetee (Jeffrey Wright), and mouthy loose-cannon Johanna (Jena Malone), who is introduced taking off her clothes in an elevator. Stanley Tucci returns, even funnier than before, as the veneer-toothed TV host Caesar Flickerman, and we see new depth in fashionista Effie Trinket (Elizabeth Banks). The new Gamemaster, Plutarch Heavensbee (Philip Seymour Hoffman) -- R.I.P. Wes Bentley's skillfully manicured beard -- despite being on Snow's staff, seems reasonable. Of the Capitol's wastefulness and excess while citizens are starving, he says, "It's appalling. Still, if you abandon your moral judgment, it can be fun." Which is true of so many things.

With the Katniss-Peeta-Gale business shoved to the background (we barely see Gale), the film runs smoothly and efficiently for its first 90 minutes, effectively mixing dark humor, social commentary, and pure story- and character-driven entertainment. Jennifer Lawrence excels at conveying Katniss' fear and worry over her actions' effects on other people, the grim reality of which the film doesn't shy away from. Strong and self-possessed though she is, Katniss is a teenager with huge burdens on her shoulders, and Lawrence's emotional performance brings it home.

Curiously, it's when the Hunger Games begin that the movie loses its oomph. Oh, it makes sense for us to be here again; it just doesn't have the same thrill it had the first time, fiendish new obstacles notwithstanding. Since we realize there's more to come after this (a third book, which is being split into two movies), I hope we can be forgiven for getting a little impatient here. The movie seems to feel that way too: the last five minutes reenergize the story and set the stage for what is sure to be a thrilling showdown. I'll see you back here in a year.