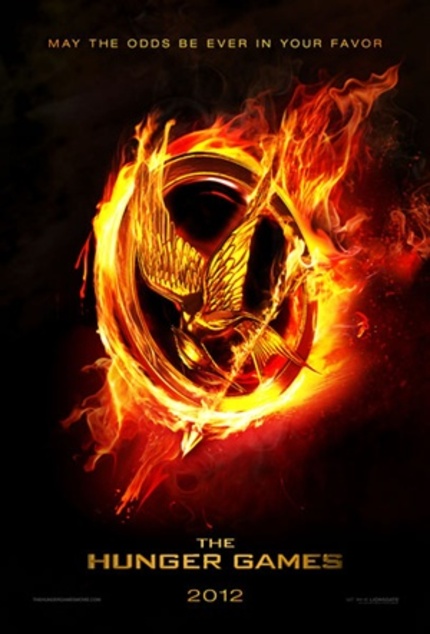 I admit up front that I'm not the demographic that The Hunger Games aims to enthrall. While I grew up reading plenty of Tolkien, and plodded my way through the Harry Potter tomes, the Hunger Games series is too contemporary, too directed at adolescent girls, to fall within my grasp. (The same can be said, of course, for the repulsive-looking Twilight series, but that's a whole other conundrum).

I also would suggest that, at least in terms of its central conceit, The Hunger Games is a kind of infantilized version of Battle Royale, taking any real sense of danger or doom from the premise and wringing through an almost callously preposterous "feel good" prism so that we're left with what amounts to a near-bloodless massacre.

If you don't know already, The Hunger Games is the story of a world where twelve defeated districts must give up a pair of young people in order to participate in a broadcast hunt to the death. It's part Roman pageantry, part assault on reality television, with a smattering of altruistic, Robin Hood-ish philosophy. The district dwellers are all dressed in drab clothing, the capital citizens akin to the upper crust in Gilliam's Brazil, but with a whimsy that feels forced rather than effectively sardonic. We've got half the film to build up to the "fight," and the second half to watch the inevitable play out. It's not too hard to see the ending telegraphed miles away, especially when you know the not-so-secret fact that this is but one part of a series.

The film is incredibly annoying, if only on a strategic level. Once our protagonist has collected her bow and arrow, a device we've already seen her well capable of using, she refuses to do what one should with any range weapon - maintain distance and kill all your enemies from cover. Is it really too much to ask that between the awkward love triangles and silly eyelashes that the film gives us a hint of proper tactics?!

I've already been hearing the counter arguments - it's a morality tale, they say, a young girl fighting against the tyrannical government by only inadvertently killing her fellow prey, providing a sharp contrast to those in power, and thus a rallying cry for the victimized region that she's there to represent. She doesn't want to kill, and so spares the life of her fellow game players when she can, only killing them surreptitiously or when she herself is under attack.

Hogwash. By any rights, she should be the first to die, save for the sheer amount of deus ex machina that parachute in fairly consistently. Without the scope of a novel, we've got severe time compression, and you never feel that there's been that much hardship as the young'uns pick off one another over time, no sense that they're really starving or at their wit's end before the ending really comes; nothing that some sky vaseline can't cure, at any rate.

Furthermore, in order to placate its adolescent audience that demands thrills without actually seeing them, the film's PG rating [in Canada; PG-13 in the U.S., 12A in the U.K.] obscures all but the most chaste of horrors through a blurry mess of shakycam. We have shots of interminable running, followed by an explosion of motion blur, and then some squirted ketchup-like goo and the boom of a cannon to account for another victim of circumstance.

So, idiotic tactics and a chaste film about human carnage - what's to actually like about the dreary mess? Well, for one thing, some of the cameo players seem to actually be enjoying themselves. Woody Harrelson is particularly effective as the washed up surfer-boy former victor, and Elizabeth Banks plays with a mid-Atlantic affectation to suitably obnoxious effect. While Lenny Kravitz's foray into sunglasses-free filmmaking is adequate enough, Stanley Tucci seems to be having the time of his life wringing the most out of his dentured, Cheshire cat-like grin.

Our beloved lead, Jennifer Lawrence, is perfectly pouty throughout - I genuinely liked her in Winter's Bone, and she takes what little she's given and does what I assume the fans will want her to do. Still, I'm not entirely sure there's enough film here for her to carry for anyone not already predisposed to love the thing.

I do not begrudge those of you that will go and thoroughly enjoy yourself at this film, I hold no particular animus for the film other than its inadequacies on a technical level. I certainly heard first hand those that dismissed Peter Jackson's Tolkien epic as an interminable, predictable mess, but I assume that even the more ardent of Suzanne Collins aren't going to pick this one over Frodo and friends. (I've been known to be wrong on this front, I shall point out again).

The Hunger Games will do what it's supposed to do, ignite another franchise after the ending of the Harry Potter series, and soon Twilight, scratching a particular itch for a particular niche. I think it'll make an absolute fortune, maybe even surpassing the glittery Vampire series, and that bodes well for Lion's Gate and their distribution partners who may then take the nerdlucre and plow money into other indie fare I might find far more palatable.

I would however humbly suggest that the more sordid, id-obsessed, and thus more interesting film is the one that you should see instead, a film that was too quickly dismissed on the North American continent due in part to its temporal proximity to the Columbine shootings. Rather than Hunger Games, why not give the first Battle Royale a try instead, or even good ol' Brazil, and chew on something that'll really sate your hunger for this type of story.

The Hunger Games opens around the world starting Thursday, March 22.