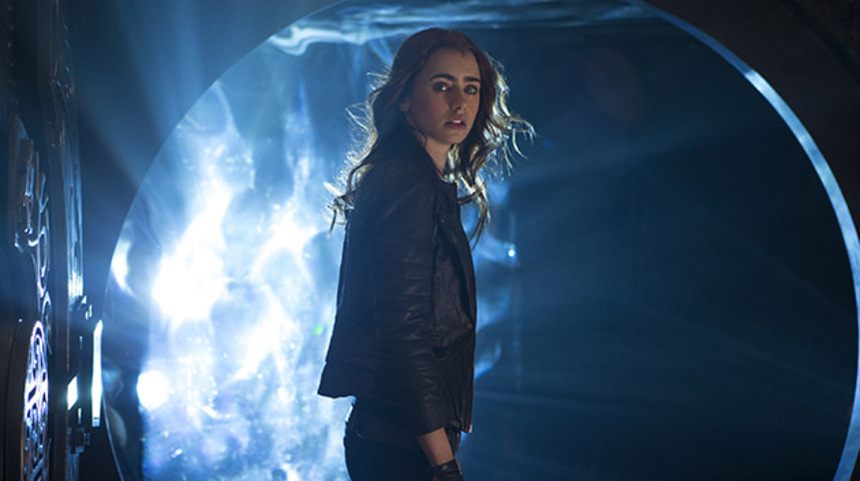 First of all, this neo-genre needs a name. There are enough entries now, and whatever movement Twilight started in Hollywood ain't stopping.

The stories tend to fall under either creature fantasy (The Mortal Instruments, The Twilight Saga) or near-future science fiction (The Hunger Games, Divergent). They unilaterally feature a teenaged female protagonist plucked from a stable family life to cross the mythic plane and engage in hero deeds. They almost always feature at least one, and often two, male suitors, who are usually magically or technically empowered, and often (at least initially) more empowered than the protagonist. At their spine is the romance between the female lead and one or both of the suitors, and a cycle of attraction, rejection, and reclamation by that lead of those suitors. Actually, calling these kinds of films "Twilight movies" isn't too wide of the mark, since we sort of already do that anyway. If you hold that twilight is a foggy period of transition, from which something more fixed (and generally darker) emerges, it isn't bad.

Second, we need an acknowledgement that nothing is successful without need. Twilight and its successors aren't frequent mega-successes for Hollywood for any reason other than that they supply something that an exceedingly large audience wants. As the most basic teen girl power fantasy - "there is power within you, that will change your world" - the appeal is clear; I'll leave drilling into their trickier manifestations of fantasy and desire for another time. Because blockbuster movies featuring female leads remain a relatively rare breed, we tend to level a degree of cultural scrutiny upon them that makes it nearly impossible for any single entry to be decreed satisfactory by all comers. Is Twilight an anti-feminist screed, a Mormon abstinence-only education parable, a post-feminist triumph, or all three, or none? No one thing can represent all things, but these movies are frequently being asked to, and unfairly. It's been a long time, if ever, since anyone had a running internet slap fight about whether Star Wars presents adequate role models for boys.

And third, as a result of the above, we need to start taking this genre seriously - which means, among other things, dropping the rank condescension and knee-jerk dislike that, in particular, The Twilight Saga engenders in most corners of the world. For Twilight to have royally pissed so many people off (sight unseen in most cases, I'm guessing) suggests a subversion of the norm, intentional or not, that must be leading somewhere - diverging from a marketplace saturated with punchy men of steel and fast, furious gangsters.

Something is happening here, and it deserves to be assessed. The Young Adult fiction section of a bookstore now dwarfs the not-young-adult fiction section. The novels are being churned into the Hollywood mill faster than they can be written and optioned. And - mark my words - the biggest hit of the holiday season is probably going to be The Hunger Games 2.

The Hunger Games: Catching Fire looks perched to create a perfect storm of sequel profitability in a way that no film since, well, The Twilight Saga: New Moon has done. The Hunger Games was no slouch itself on the box office scale, but between that film's success (an astonishing $400M for a mid-March release), Jennifer Lawrence's ascension into the Hollywood stratosphere (an Oscar win and a beautifully delivered middle finger, this past winter), and the franchise's having moved to claim Twilight's old mid-November release window, Catching Fire is going to ravage the moviegoing universe all night long, and has a better than average shot at eating The Hobbit: The Desolation of Smaug alive for post-coital breakfast. Old world, meet new world. In the ten years since The Lord of the Rings, boy fantasy has become girl fantasy. A whole new mode has emerged, and nobody with fur on his toes is on the poster.

One of the keys to this genre's success is the latchkey serialization of it all. It's pre-fab franchising. Each story is spread across a convenient trilogy or thereabouts, with a final book that all and sundry will assert is sufficiently complex to be broken into two, more-profitable pieces. (Hey, The Deathly Hallows probably was. Jury's still out on Breaking Dawn.) The source material's serialization inherently drives towards a growth of profit over time, and the risk of betting on a franchise as a whole therefore drops. Thus, The Mortal Instruments: City of Bones can emerge in the late-August heat to a fairly disastrous nine million dollar opening weekend ($24M overall as of this writing), but the sequel, City of Ashes, can begin shooting in Toronto this month nonetheless - because, at least theoretically, enough audience will find City of Bones in the coming months to make the second film's release bulge wider.

Lily Collins, Jennifer Lawrence, Kristen Stewart, Shailene Woodley, and all of their successors are nominating a new alternative to the ingénue stage of an actress' career path: the teen asskicker. It might strain credulity to see Stewart fly through the gates of the Evil Queen's castle in Snow White and the Huntsman, cloaked in armour that a girl her size could barely carry, but it's an important re-read of the basic tenets of old mythology nonetheless. Chris Hemsworth - Thor himself - is so pleasantly subservient to Snow White in that movie that it seems startling, until you remember that over in her other franchise, Kristen Stewart had two males of unimaginable supernatural power fighting over her like a couple of toddlers pulling on the same Tonka truck. It might not be in line with the most politically correct thinking about how a person is to be valued, but reversing the nominal polarity of good ol' teenage lust - from desiring to desired - isn't hard to suss out for its appeal, either.

The Mortal Instruments may have fumbled the ball on levels beyond the financial (the movie starts well, but disintegrates so completely upon the introduction of its love story that it becomes wholly laughable), but as a viewing experience, it was hard to argue with the solidity of its place in the modern moviegoing landscape. The trailers screened before Mortal Instruments were for Catching Fire; a heaving-chests classical reiteration of Romeo & Juliet with dreamy teen leads; and next year's breakout franchise, Divergent, which - if its source novel catches just a bit more fire between now and Christmas - might become the new reigning champ for the whole set.

And after the trailers, I watched a two hour fantasy in which a teen girl finds out that her mundane life has always been an illusion, and that there are magical warriors all around us, who only she can see, join, fight alongside, and be desired by. No, the movie wasn't very good. But at no point watching it did I mind my suspicion that we'll be seeing a whole lot more of them.

More about The Mortal Instruments: City Of Bones