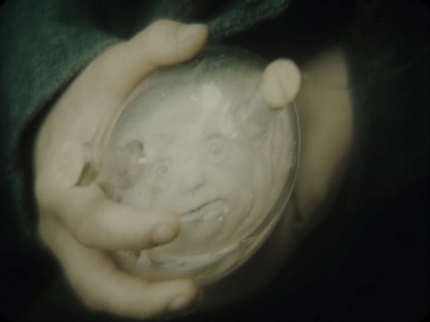 Alexandr Sokurov's interpretation of Faust is one extraordinary, hallucinatory trip.
It starts with Dr. Faust (Johannes Zeiler) dissecting a corpse, looking for/failing to locate the exact location of the soul. Living in extreme poverty, he tries to pawn his ring to a dark eyed, deformed, devilish pawnbroker (Anton Adasinsky). Instead, the pawnbroker convinces Faust to sign away his soul in blood (ink is expensive!) in exchange for one night with virginal Magarete (Isolda Dychauk), whose brother he just killed during a fit of rage in a bar brawl.

Shot by renowned French cinematographer Bruno Delbonnel (Amelie, Harry Potter and a Half-Blood Prince, Inside Llewyn Davis), Faust is an amazing looking film. Even though it is not shot all in one take like Sokurov's festival favorite, Russian Ark, it's visually so cohesive and fluid, you don't get to notice the edits much. Its soft edges and shallow depth of field, dutch angle, dark, expressionistic cinematography and mirror tricks give it its hypnotic, nightmarish feel.
Adasinsky is perfect as a ratty, sniveling Mephisto, looking like he just jumped out of a Goya painting. There is no stuffiness in this period piece: the camera and actors are constantly moving. Giddy and playful, it almost works as a comedy. It has enough beautifully weird moments that are not out of character as a whole. Faust is fascinating, and may be the most accessible Sokurov experience to date.

Shooting in Germany and Iceland with an international cast and crew, Faust is perhaps Sokurov's most pan-European film to date. From what I hear, the film has gotten unwavering support from the Russian Government because Putin rightfully regards Sokurov as the beacon of Russian culture, its soulful cultural lineage going back to Dostoevsky and Tarkovsky.

Sokurov wraps up his Men of Power tetralogy with a fictional character, drawing from Goethe's famous play, which was a reaction to the Age of Enlightenment. Ultimately, Faust is punished not for the murder or fornication, but for his faithlessness. The three previous films in the tetralogy were: Moloch, Taurus, and The Sun, each depicting the lives of Hitler, Lenin and Emperor Hirohito. In them, he depicted these larger-than-life characters as petty, small human beings who either denied god's existence or that he was once god-like. But compared to Faust, those films were dry and cinematically unexciting.
Sokurov concludes men's hubris in a godless society in a spectacular cinematic fashion with Faust. Do not miss seeing this on the big screen.


Dustin Chang is a freelance writer. His opinions and musings can be found in www.dustinchang.com
Tweet Post Submit