A true delight, Frozen is a visually spectacular retelling of a fairy tale done with the kind of gumption and bravado for which classic Disney animation gained its reputation.

What Frozen is not, fortunately, is the type of film that Disney Studios marketing presents it as being. Clips of funny creatures and carrot nosed sidekicks do speak to the worst impulse of many so-called "children's films". Yet Frozen lives among those those very few that transcend the form, movies that work on the level of modern myth-making that speaks to both young and old alike. Disney has a "treasure" moniker that gets far too easily applied by the corporation to many of its works, so it's nice to see when the lofty nomenclature seems entirely appropriate.

Despite the egregious trailer and the 'boys should go see it too' gender pandering from the Mousemarketeers, this really is a tremendous work for the entire family. Mining the same rich history that has brought us many of the definitive Disney animation films, from Snow White and the Seven Dwarfs and Cinderella to The Little Mermaid and Beauty and the Beast, Frozen takes a typical Germanic fairy tale and manages to make it its own, without requiring a particularly cynical or contrived twist to make it work.

Frozen may not be fully post-modern, but it is certainly self-aware, both of the strengths and limitations to a modern audience of its source material, and also the films that have gone on before. The closest work to this balance of style is seen in Tangled, a lovely film that came close but didn't quite live up to its early conceit.

With Frozen, we've got almost everything one wants in a film of this ilk - struggle, drama, love, prince and princess and common folk providing wry commentary. Myths are meant to be repetitive; it's this very repetition that helps give them their power and role in our culture. I've heard some complain that the film felt "old fashioned" while missing what I believe to be some sophisticated playfulness with audience expectation. Yes, things go right in the end, but this is part of the form, as if one should complain that Elizabethan tragedies always end with loads of death whilst pontificating in iambic flourishes.

So, yes, Frozen is overtly, unapologetically, perhaps even blessedly a film in line with the Disney classic musical idiom. Like The Little Mermaid, it's based on a Hans Christian Andersen tale. The clever script by Jennifer Lee takes the core narrative of The Snow Queen and gives it enough twists to keep it interesting. Along with her co-director Chris Buck, Lee beautifully merges the old with the new, without ever succumbing to maudlin or overly contrived feelings.

I believe Frozen may be considered an instant classic, perhaps Disney's first film made during the CGI era that equals their 80s and 90s output. Naturally, a large part of the film's success is found in the tunes. With songs by Robert Lopez and Kristen Anderson-Lopez, the award-winning team behind Avenue Q and Book Of Mormon, we have a musical that finally holds up well against Menken and Ashman, the previous duo to whom the last renaissance was attributed.

We've got superstar vocal performances from the likes of Kristen Bell and Idina Menzel, belting out songs that are both whistleable and musically sophisticated. There's beautifully choreographed animation that had us sweeping through the extraordinary sets and locations rendered in almost mind-boggling 3D. The sculptural aspect of the world, from the shapes within the stone castle to the frozen fountains capturing the torrid water mid spurt maybe overlooked by casual visitors, but it is the pinnacle of modern animation, a demonstration of how artists shape the environment for story reasons, not just to show up the power of their rendering system's capability of replicating nature. 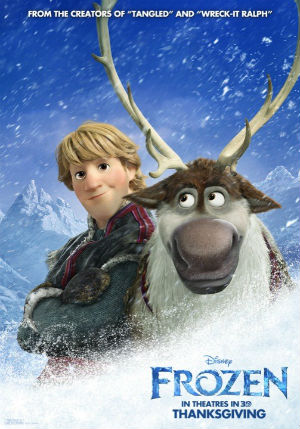 Yes, there's a magical talking Snowman, voiced by Mormon's Josh Gad, and no matter how tacked on he may feel to some, or how late in the writing process he may have been included, I found the character both adorable and effective. I liked how we got classic Disney sidekick animals, even with their own song, but sung by the human, mimicking the type of duet that films like this normally mine. Again, it's a subtle thing, and the line can be drawn in many ways when accepting one magic over another, but what's heartening is that these are clear and precise decisions made but a group of filmmakers fully in control with what they're representing to their audience.

We don't get a series of fart jokes, or pop-culture infused banter. We do get moments that feel like genuine jeopardy, plot twists that feel earned, and a genuinely positive moral at the end of the story. We get a story about a pair of princess, some magic powers, some moments of flight and fancy. Yet it's in the effectiveness of this telling that the film stands tall, twisting audience expectation without it feeling ham-fisted.

In short, Frozen is the best animated film of the year, a wonderful celebration of music and story. It shares its heart with the rich tradition of Disney animated film. Despite the crassness and overly-produced gloss of most animated films, this work can be held up as something familiar yet extraordinary. It is a work to be embraced without cynicism, one that can simply be taken on its own merits as a charming, funny, musical experience that treads the warmly familiar while remaining compellingly contemporary.

Frozen is now playing in limited release in Los Angeles. It opens wide in theatres across North America on Wednesday, November 27. Check local listings for showtimes.

Do you feel this content is inappropriate or infringes upon your rights? Click here to report it, or see our DMCA policy.
Chris BuckDisney animationIdina MenzelJennifer LeeJosh GadKristen Bell