Spinning off from 'Frozen,' the animated tale stars Josh Gad as the inimitable Olaf in a new short film, debuting on Disney Plus. 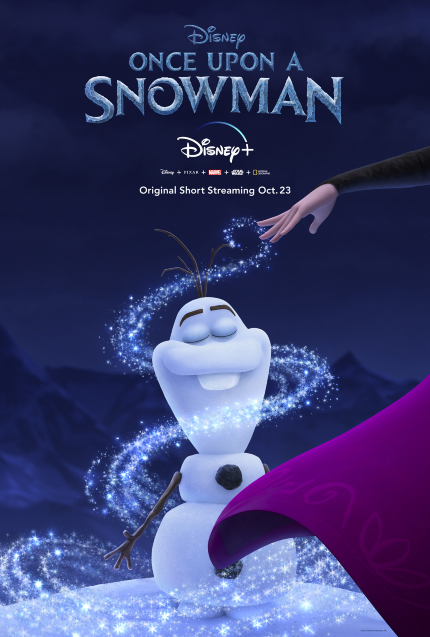 When you wish upon a snowman, makes no difference who you are.

Once Upon a Snowman
Debuts exclusively on Disney+ October 23, 2020.

Sometimes, the most unlikely supporting characters break out into popularity all on their own, and that seems to have been what happened with Olaf.

Disney's Frozen became a worldwide phenomenon back in 2013, and that swept the characters, and the actors who gave their voices to them, broader appeal and recognition. Before the film because a smash, Josh Gad had already built a respectable career as a supporting player -- I remember him as Steve Wozniak in the otherwise unmemorable Jobs (2013) -- while his sometimes raspy voice helped earn him regular roles as a voice talent.

Olaf, though, the cheery, roly-poly snowman, somehow caught fire with the kiddies. Perhaps it's his sunny disposition? The character has since appeared in the shorts Frozen Forever and Olaf's Frozen Adventure, the latter in a starring role.

Of course, he returned in last year's feature-length sequel, Frozen II, and earlier this year, he starred in At Home with Olaf, a series of 21 very short videos, also available on the Disney+ streaming service. (How did I miss this? I'm a subscriber, but I don't have children. I love animation, but I'm overwhelmed with streaming services right now ... so the answer is: I don't know.)

Every character needs an origin story, or so I've been told by modern popular culture, and thus Disney has produced one for Olaf. Once Upon a Snowman cleverly skates around the first Frozen to answer common questions that everyone, including fans of Olaf, must wrestle with for themselves.

Wrapped up in gorgeous animation that surely will inspire multiple viewings by children and adults alike, especially for those of us who enjoy the art of animation -- seriously, this looks amazing, and beautifully detailed, even on a relatively small screen -- this is not the place to come for some revisionist take, though I must admit that my occasionally dark heart wonders about the dark corners where Olaf may have wandered into on some dark nights of the soul.

Instead, we get a very playful Olaf, before he can quite figure out his own identity and his true purpose in life. Spoiler / not a spoiler: it's quite family-friendly and uplifting.

In other words, why am I writing about Once Upon a Snowman on a site like ours, which is principally devoted to indie and international genre films? Answer: I love animation in all its many, many forms, including a film like this from Disney, which reminds me that kids don't care about budgets, but they delight in watching their favorite characters over and over and over again.