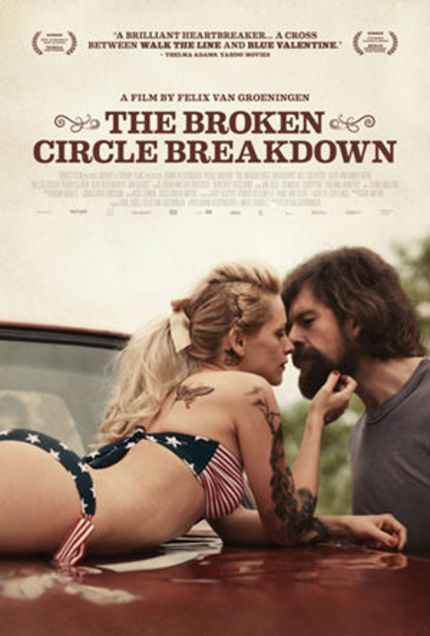 "You'll rue the day that you were born. For givin' me the devil cause I wouldn't hoe corn."

This is the stuff of old country music, the purest of joy taken, perhaps from mistakes made, perhaps just fate teasing and cruelly taking away. I have not been this emotionally affected by a film since Lars Von Trier's Dancer in the Dark, but where that film is angry, manipulative, and often recklessly dishonest in its melodrama (which I also love) for the purpose of provocation, Felix Van Groeningen's The Broken Circle Breakdown is earnest, warm, and utterly human - but no less calculated.

In terms of an emotional endurance test, this is as powerful as anything I have seen, and yet it is an earnest, completely accessible slice of pop cinema as well. This is something of a miracle.

Opening in the warm yellows of a small town Flemish bar - a familiar location if you have seen the director's previous The Misfortunates - Didier and his band are having a great time on stage singing bluegrass tunes in accented American English to the locals. Cut to a harsh white light of a hospital room, icy cinematography that I have come to associate with Northern European film. It is presumably at some point in the future, and Didier's young daughter, Maybelle, is getting injections for her advancing bone cancer. Didier's wife, and singing partner, Elise makes a quietly tense plea to keep a positive face in front Maybelle. Tears are to be bottled up until they they are not in the hospital. This is impossible for such an empathetic husband and father who has never really had a reason to hide his emotions.

Cut back to an even earlier point, where Didier charmingly meets and picks up Elise at the tattoo parlor where she works. He offers an impassioned, playful, monologue about Hank Williams Sr. and Bill Monroe. Cut to their daughter playing with chickens in the yard of the church that Didier and Elise have converted into a home. Back to Maybelle's cancer going into remission while she loses her hair and still requires more injections. This is the way that The Broken Circle Breakdown juxtaposes carefree joy with wrenching emotional pain.

The film has plenty of time for quiet moments as well. Didier smokes a cigarette while his dog chases those same chickens in the dawn hours. As much as the film is an effective, smile-inducing, tear-jerking empathy engine, it is very much a musical as well. There are plenty of great bluegrass numbers scattered across the film. The associations and attention to detail in the filmmaking is very much like the that of a songwriter. But the long-form visual nature of movies allows Groeningen to have his immediate emotional response, and work in a lot of character and ideas into the mix as well.

The couple's first blush of passion, sex, and little responsibility to anything but making music gives way to the multitude responsibilities of building a family, the conflict, compromise and domestic joys of it all - how punk can evolve into parenting. It sounds typical, even cliche, but under the gaze of Groeningen's camera, it is anything but. The cancer, and the emotional stress, offers moments to pull together, but for such an emotional couple, it also rips them to pieces. With death in the room, his atheism and her faith put belief as the primary trigger for their fights and emotional release. The music brings joy, but then guilt for having joy while Maybelle suffers. It is complicated stuff, the tug-of-war of comforting illusions, rationalizations and impossible to articulate feelings.

Maybelle takes her first steps on September 2001, while planes smash into the towers, ignored in the background. Later, Didier gets enraged at watching a speech by President Bush putting roadblocks in the way of stem-cell research, roadblocks that have may have delayed key findings to their daughter's help.

The film is not didactic, political, or movie-of-the-week in the slightest; this stuff drives our understanding of Didier's frustration, rage, and his outlet for such things. A delicious, bleak, irony that the country he adores so much impedes something he desperately needs. Life is full of these types of tragic things. But the tone is far, very far, from just suffering and gloom. It is more than the sum of portent symbols of sadness to come or emotions attached to objects from events past, though these things are all there.

The absurd kineticism and joie de vivre so heartily (and raunchily) on display in The Misfortunates is further honed and elevated here: Elvis as a priest presiding at the small wedding amongst friends; a birthday party with a dozen girls belting out the theme song to a goofy girls superhero TV show; Elise's many colourful tattoos peaking out of her country singer wardrobe. The tattoos, in fact, are in many cases inked over symbols of her love to past boyfriends, the image-on-skin reincarnated into something wilder still. She gets a tattoo with Didier's name at one point; it is a six shooter.

Johan Heldenbergh and Veerle Baetens play the onscreen couple with rich emotional range, compelling and believable musical performances, and so much inviting empathy, even when each of them are at their lowest. It is telling in their several sex scenes, which are raw and intimate and intense at the same time; it also implies the ephemeral nature of all such things, of course, depending on your own spiritual thoughts or beliefs. The film confronts these things occasionally quite head on, somehow without being obnoxious about it or feeling preachy.

It is staggering to think how much of the human experience Groeningen, his five screenwriters, and three lead performers manage to stuff into The Broken Circle Breakdown. If this review seems to mention too many key moments in the film, you are mistaken; this barely barely scratches the surface of what is accomplished here in a mere 100 minutes of drama and song.

If it were possible to bottle such an erratic and chaotic thing such as a life (or three) and make sense of so much of the senselessness, it has been accomplished in bravura fashion in this film; even if lives are cut short, where the devil may get his due. Here are more lyrics from bluegrass singer, Alison Krauss: "Why do you come for me to wed? Can't even make your own corn grain. Single I am and will remain; A lazy man I won't maintain." It's pure American country transported to Flandres.

The Broken Circle Breakdown is already unabashedly, unpretentiously, even gloriously one of my favourite films of the year!

Review originally published during Fantasia in July 2013. The Broken Circle Breakdown is Belgium's submission for Academy Award consideration as Best Foreign Language Film. It opens today (Friday, November 1) in New York before expanding across the U.S. in the coming weeks. Visit the official site for more information.