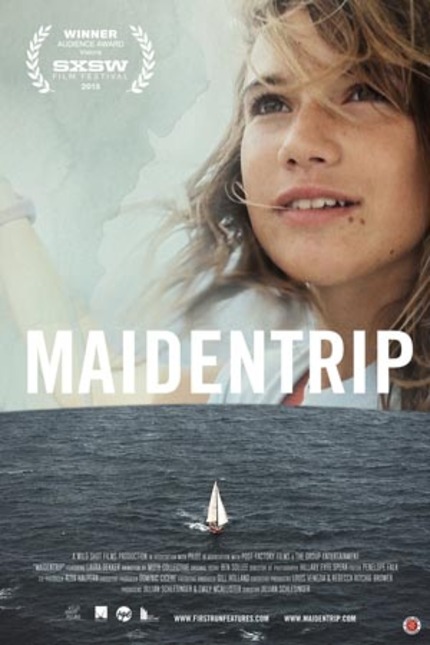 Sometimes it just warms your heart to see a film finally getting the attention it deserves. It has just been announced that the wonderful SXSW Audience Award-winning documentary Maidentrip will be setting sail from First Run Features in New York on January 17th. This has been a labor of love by director Jillian Schlesinger and producer Emily McAllister and the release news is a huge step towards helping this film find its surely adoring audience. We've got the trailer for you below and you can read my review of the film here.

Directed, produced and shot by a team of young female filmmakers, the new highly acclaimed documentary film MAIDENTRIP celebrates the accomplishments of the intrepid young woman Laura Dekker and brings her complex and inspiring real-life story to the big screen.

In 1995 Laura Dekker was born on a boat in the port of Whangarei, New Zealand during her parents' seven-year voyage around the world on their sailboat. At just six years of age, Laura sailed her own dinghy alone across the lake where she lived. At the age of ten, she took a multi-week trip to Friesland, Netherlands accompanied only by her dog Spot. Then, in 2009, at the age of 13 Laura announced her plans to sail solo around the globe.

After a year-long court battle with Dutch authorities who attempted to stop her voyage and the unwanted global media scrutiny it sparked, 14-year-old Laura Dekker finally set out--camera in hand--on a two-year solo voyage in pursuit of her dream, alone without a follow boat or a support team, on her transformative 27,000 mile global odyssey. During the longest leg of her trip across the Indian Ocean, Laura spent 47 days alone at sea.

Laura's dream was "to be the youngest ever to sail around the world alone," but she didn't want to set a speed record. Instead, she sought to experience the remote and wonderful corners of the planet on her own,stopping to explore along the way.

Jillian Schlesinger's debut feature film MAIDENTRIP captures Laura's journey as she explores the world in search of freedom, adventure, and distant dreams of her early youth at sea. Schlesinger's filmmaking amplifies Laura's mature, brave and defiant voice through a mix of Laura's own video and voice recordings from sea and the intimate vérité footage shot at the stunning stops along the route, including the Galapagos Islands, French Polynesia, Australia, and South Africa.

Do you feel this content is inappropriate or infringes upon your rights? Click here to report it, or see our DMCA policy.
DocumentaryFirst Run FeaturesRelease NewsSXSWTrailersJillian SchlesingerLaura DekkerAdventureBiography