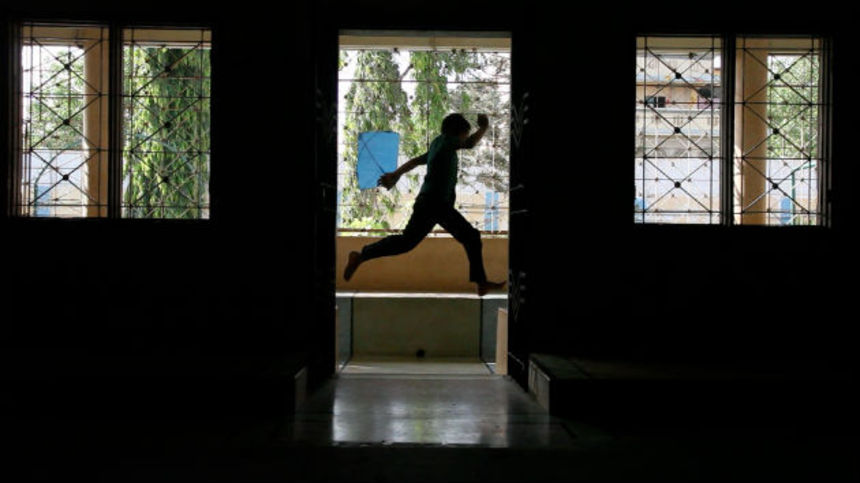 Striking a poetic cord, These Birds Walk finds a symbiotic naturalism between those filming, newcomers Omar Mullick and Bassam Tariq, and those being filmed, the unwanted children of Pakistan.

Pakistan, more than any other country, feels like an innocent bystander to the draconian war on terrorism, caught in the wrong place at the wrong time with the wrong set of circumstances. The Taliban found harbor in its borderlands, and the U.S. military marched in and took advantage of a government with few options. None of this is directly addressed in this impressionistic documentary, but by focusing on the most vulnerable and credulous demographic, it documents the heartbreaking after-effects of the chaos imposed on Pakistan the past ten years.

The behind-the-scenes setting is a safe home for kids in Karachi run by the homegrown non-profit Edhi Foundation. A sign at the entrance of the facility states, quite bluntly, that it is a place for unknown and abandoned children. The home takes in kids from all walks of life, escaping from abusive situations, discarded by impoverished families or simply left alone in the world for complex and uncertain reasons. The Foundation itself and its aging founder, Abdul Sattar Edhi, is a story worth being explored, but it only functions as a backdrop to the moving narratives of the children who have nowhere to go. Edhi, quick to take the focus on himself, states early on in the film, "If you want to find me, look to ordinary people."

The ordinary people who are found by Mullick and Tariq are a handful of young boys housed within the overcrowded confines of the safe house. The social service offers food and shelter, but also, with the intent of returning them to their home, keeps the doors locked to prevent a possible cycle of injury, delinquency or running away. Within what seems to be a largely unsupervised social environment, the film takes a fly-on-the-wall approach, allowing the stories and their larger implications to emerge without the obvious presence of the camera.

Omar, only 10 years old and jaded beyond his age, is one of the boys at the center of These Birds Walk. The prologue of the film shows him sprinting towards the sea, and when he reaches the water he hits the waves with his hands -- an ambiguous exaltation not unlike the finale of The 400 Blows. But that was the last act for Antoine, and this is the first act of Omar, whose joy and anger are not contradictions within the context. Omar's return to his family has been delayed because they live in an area outside Karachi deemed dangerous. Painfully, we see his cruelty as well as his susceptibility as he works through his fears and frustrations with the other boys in the home.

Mullick and Tariq are careful not to set an overt agenda with these portraits. Omar's own actions, words and eventual reunification with his family speak far louder than any pedantic directorial overtones. And this goes for the other boys profiled as well: Mumtaz, who is the groups de facto Muslim prayer leader; and Rafiullah, who fears he will be beaten once he is returned home. Although we don't find out if Rafiullah is correct, it is very clear upon his arrival that his family does not want him.

All of these boys dream of the idea of escaping, but, even more, they dream of a family that they don't have. Devastatingly, much damage is done to these innocent outcasts, but These Birds Walk nonetheless offers a window of hope with the selfless work being done to give these children, even if it is against all the odds, another chance.

Review originally published in slightly different form during the Minneapolis/St. Paul International Film Festival in May 2013. The film opens in New York the Village East Cinemas on Friday, November 1. Visit the official site for more information.

More about These Birds Walk