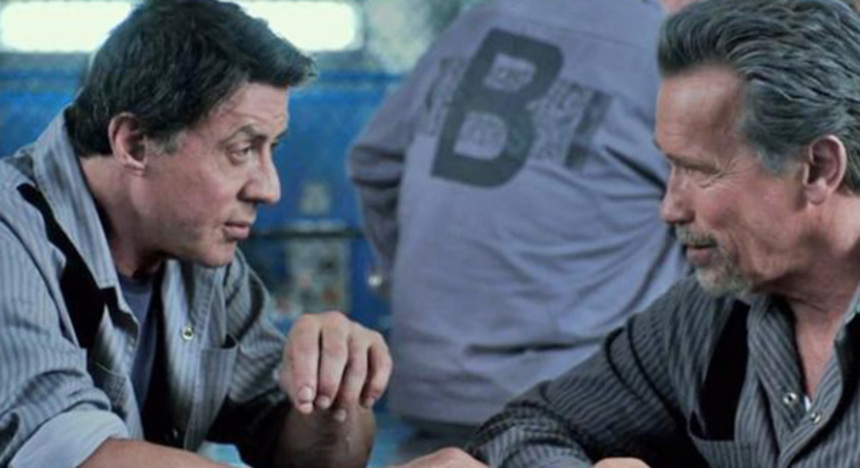 Let's be super clear right from the top: Escape Plan is a film that you will enjoy in direct proportion to your expectations. If you're expecting some transcendent breakdown of action tropes, pitting two aging action stars against their own mythology, creating a Searchers-like reexamination of past glories through the lens of a sophisticated narrative, well, you're not going to get it here.

Nor, thank the makers, are you getting some incredibly tedious, self-effacing bore fest that such dreck as Expendables 2 exemplified. In this pairing of Arnold Schwarzenegger with Sylvester Stallone, you get, at its core, the kind of film that these guys always used to make: high concept, thriller-meets-action movie with some snark, some bite, and a whole lot of posturing.

It's thus all the more comforting that the film does what it sets out to do with enough quality that it can at least be considered satisfactory.

The story is the stuff of TV pilots: a professional prison escape artist is hoodwinked into trying to escape from a seemingly inescapable prison, whereupon he befriends a fellow inmate in order to, um, plan an escape.

Director Mikael Håfström even films the thing like a small-screen procedural, using CGI wireframe transitions that could come right out of CSI: Prison Escape Location. What is in fact a pleasant surprise is that the script by Miles Chapman (scribe of Road House 2: Last Call (!)) and Jason Keller (writer of the fifth Die Hard film) have kind of, sort of written an enjoyable narrative. Somewhere beneath the clichés and heavy handed dialogue, there's a decent concept fairly well executed.

For the most part, our two leads are perfectly acceptable in their roles. They're joined by quite a capable ensemble, including Sam Neill, Vincent D'Onofrio, Curtis "50 Cent" Jackson, Faran Tahir and the ever lovely Amy Ryan. Even Vinnie Jones shows up as one of the guards, his angular face and menacing accent the kind of heightened baddy you'd expect.

The dastardly warden is played by Jim Caviezel, and I thought he came closer to the kind of intense yet blandly sociopathic characters required for such a film than I was expecting, not quite living up to the glorious bombast of a Waterworld-era Dennis Hopper, but with far more effectiveness than the wet blanket that is Timothy Olyphant in Die Hard 4.

Escape Plan gives enough twists to keep things engaging, enough scraps and physical moments to make you remember the glory days of these guys. There are even overt Cliffhanger and First Blood references, always nice to see, and Arnie is able to pull off the "Evil Spock" beard effectively even when he's of an age that he keeps his shirt on for the entire flick.

So while I didn't quite respond to it on the level of Last Stand, which I think was much broader in its conceit than this film, and likely the better for it, I still had quite a bit of enjoyment at the multiplex tonight. Having got this far into this review and just now rereading my Last Stand take, it's amusing to me that at the start of this cinema year I cautioned the same thing - lower your expectations, and avoid at all costs if you can Expendables 2.

In a week where the likes of 12 Years A Slave is opening, Gravity and Rush are still playing in theatres, and a slew of other Oscar worthy films are coming down the pike, it's clear that this is absolutely counter programming to the more cerebral or nuanced films populating our screens this late in the season. Escape Plan is cotton candy cinema, and about as architecturally substantial. It's a brisk two hours spent with a couple of VCR-era legends working their way through an appropriately convoluted tale, executed with enough gumption to make the film a fun if frivolous escape.
Tweet Post Submit

Do you feel this content is inappropriate or infringes upon your rights? Click here to report it, or see our DMCA policy.
Arnold SchwartzeneggerMikael HafstromPrison DramaSylvester Stallone