Morelia 2013 Review: Life Reflections From Inside An ELEVATOR (ELEVADOR) 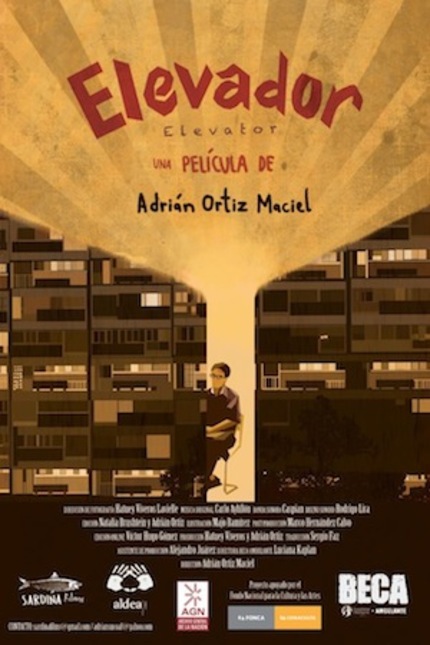 The Mexican 70-minute documentary Elevator (original title: Elevador) shows right from the beginning a powerful way to contrast and distinguish a dream from reality. This is a film about losing hope, joy and youth, about broken dreams in modern Mexico City. At the same time, director Adrián Ortiz has created a little piece that yet explains much about the enormous impact institutions have on individuals.

Ortiz doesn't use much stock footage aside of an almost surreal commercial that opens the doc and place us in a peculiar Mexico City building. Going back to the years when Miguel Alemán Valdés was Mexico's president (1946-1952), a terrestrial paradise for the government employee was conceived and, with renowned architect Mario Pani on board, the urban center Miguel Alemán ("the oldest multifamily of Latin American" remarks the synopsis) eventually came to life with more than a hundred apartments.

It was perfection for the employees as they were set aside the Mexican decadent society, that with constant crime and threats for children, and placed in Elysium with everything available, from the basic (education, healthcare) to luxury (a big swimming pool).

Waking up from this utopia, Elevator take us to the urban center more than 60 years later, when a significant number of problems have emerged, replacing all the luxury. When the government stopped providing budgetary support, everything changed for residents; good life conditions in general are pretty much gone from the urban center and, or course, the fun times at the swimming pool are now only blurred memories. Elevator remind us what real life in Mexico, or any third world country for that matter, is all about: a hard-working society, abandoned by its corrupt government, trying to remain safe/sane and not end with a life wasted.

The doc quickly establishes a style difficult to ignore, with the camera hardly following faces but rather staying low to capture hands and feet, while being witness of natural conversations between the residents. There's one specific sequence, with many shots of different people's shoes, that confirms Ortiz as a focused director: he never shows the faces of people who are not the protagonists and, overall, Elevator is not the most conventional documentary.

These main characters are the urban center's elevator operators, and in many ways we find through them a strong reflection on modern times. Elevator is about human interaction, arguments and day-to-day stories, hence everyone who has lived in an apartment building should be identified. Considering the film follows about seven different operators, it may sound a bit repetitive and simple to watch the conversations between them and the lift's users. Fortunately, this is always a real though-provoking and sensitive piece.

Just thinking in what the operators do for a living (staying in such limited space for eight hours) is powerful, though the film has much more to offer. Many characters means different perspectives and, indeed, the film turns to be a very rich experience. It begins as a denouncement of the urban center's problems (crime including) and about aging, through senior citizens who still need to work and are basically alone. Little by little it adds more layers and ends being simply about life.

Picture a man who had a happy childhood, surrounded by familiars. Eventually, he became a happy adult with a steady, well-paid job for more than 30 years. But then an economic crisis appears and he loses his job. Now he's too old to find another great one, leaving him no choices but to become the elevator's operator of the place where he once enjoyed a big swimming pool. It's difficult for him to remain positive, and to deal with nostalgia, but nevertheless he keeps finding the silver lining.

Everything Elevator is about comes perfectly captured in a regular man's life story, and this is why it's very easy to feel with it.

Do you feel this content is inappropriate or infringes upon your rights? Click here to report it, or see our DMCA policy.
ElevadorElevatorMorelia 2013Morelia International Film Festival