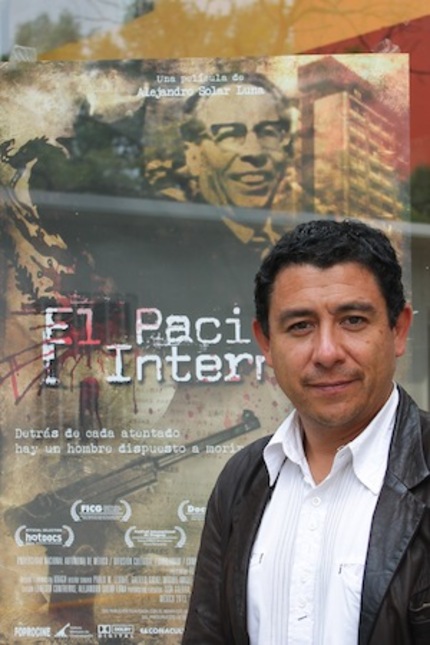 Today, October 2, is the 45th anniversary of one of the darkest chapters in the history of Mexico: the 1968 Tlatelolco student massacre. While Mexico "never forgets" October 2, few people know that less than two years after this tragedy, a man unsuccessfully tried to kill former Mexico president Gustavo Díaz Ordaz (the man responsible for the massacre).

This Friday, October 4, Alejandro Solar's debut feature film, the documentary El Paciente Interno (The Convict Patient), hits Mexican cinemas with the promise of exploring what happened with Carlos Castañeda de la Fuente after his failed assassination attempt. I met Solar on September 23 and discussed The Convict Patient for almost 30 minutes.

ScreenAnarchy: Now that I have seen the film, I confirmed not many people know that once a man tried to kill Gustavo Díaz Ordaz. How this story came to you and what was your first thought?

Alejandro Solar: The film was born when I read a chronicle by journalist Gustavo Castillo, published in 2004 on La Jornada, in which the story of Carlos Castañeda de la Fuente was told, a man who tried to assassinate president Díaz Ordaz. He was declared a mental patient, locked up in a psychiatric hospital for 23 years, and nowadays lives as a homeless person.

When I read the story I thought it was unusual, deserving to be told, the fact that a man survived to that punishment and, at the same time, was invisible to society's eyes like any indigent. I was born in 1968 so that also connected me with the story of this man who tried to change history. When I read the article I saw immediately the film. It had to be documented, I had to look for him, investigate to bring it into the spotlight.

How did you make contact with Carlos Castañeda de la Fuente?

At the beginning, I structured the documentary project to have the searching for Mr. Carlos as the central thing. This vérité searching in the streets, the shelters, and at the same time we were going to tell, through characters involved directly or indirectly with his life, what he tried to achieve (the assassination) and the consequences.

However one day, in August 2008, the lawyer Norma Ibañez (she's in the film) calls me and says that Carlos is in front of her. She ran across him in the streets (Reforma and Amberes, in Mexico City) and until that moment I knew he was alive. I only said to Norma: "take a picture of him"! And that's when I finally got an image of how Mr. Carlos looked like 40 years later. His last image was the one from the film, when he is arrested.

By then a physical anthropologist was already involved for the studies of how Carlos would look like after 40 years. With the photo this became meaningless, so the physical anthropologist was replaced from the film by a private detective I contracted. She (the detective) was a character in the film, remaining anonymous. I gave her a camera and tapes and she went to the streets we knew he was around (Reforma, the Cuauhtémoc borough), documenting the search. Luckily, she found him!

I observed and followed him, documenting his life style, and by the end of the day I approached him. I didn't know if he wanted to talk about the subject or really who he was. After a five-minute conversation, he says to me "I shot the Secretary of Defense but I wanted to kill president Gustavo Díaz Ordaz". Then I realized he was a man who wanted to tell his story and I said to him, "I want to make a film of this". I began filming the documentary in December 2009, almost two years after I realized he was alive.

Carlos is indeed a mental patient, result of his imprisonment, and the first thing that came to my mind was "how can I help him?" I knew many shelters so I asked him if he would like to go to one. He decided to do so, and that day with the protocol (the first sequence of the film), the project was something completely different. I didn't know which film I was doing, it was anymore a search so I chose to be with him, enter to the shelter and observe his socialization. 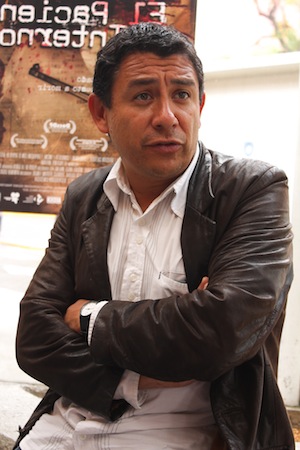 From this emerges the exploration of the psychiatric hospitals?

Inevitably, the exploration of the psychiatric hospitals came per se. The first location I visited was the psychiatric hospital, it was the first place I called saying I was doing the investigation of a former patient. I did the scouting, took photos and indeed there it was the "pavilion 5" and the "pavilion 6", which I never talk about in interviews because I leave that for the film. (The "pavilion 6") Is the climax, the top of the atrocious and revenge.

In the film we see another patient of the mental hospital (Fulgencio). How do you approach this type of interview?

Well, one arrives to the hospital asking for the patients who might have known Mr. Carlos. "Fulgencio, of course", they told me. I asked, "Fulgencio, I would like you to tell me how was this space". It was really important to bring life to these lugubrious places.

Fulgencio, a mental patient part of the "pavilion 5" that was really a killer. (In the film) He tells us how he stabbed another patient... he was a real psychopath. His story is another movie because Fulgencio came from Lecumberri (a former Mexico City prison). He wasn't a mental patient: he killed and knocked the students in 1968 while in Lecumberri. When this prison is closed, they don't know what to do with him so they send him to the "pavilion 5". For Fulgencio this is freedom, as is a psychiatric hospital and not prison anymore.

Was there any trouble to get the hospital footage?

No, I was very lucky and I think it was always a matter of how I presented the film and the story. Everybody thought it was incredible, relevant and interesting.

The federal government (with the hospital's jurisdiction) wasn't a PRI (Institutional Revolutionary Party) government but PAN (National Action Party). And to enter a camera to the hospital, which is not easy at all, the city's government was the PRD (Party of the Democratic Revolution). There was no PRI. I didn't have to deal with that party and that was important because I didn't find troubles.

The day Carlos arrived to the shelter, the authorities of the Federal District were like "What's happening there?" I then talked with the public assistance authorities of the city's government and they said, "that's interesting, good luck." I was always very honest, I wasn't going to unmask or see the current situation of the psychiatric hospitals. It wasn't my subject. It wasn't my subject to see if the shelter worked fine, and I actually found only anonymous heroes in the shelter. The people who assist them, the shelter's director, the social workers, are all real heroes.

I had collaborations with the 1968 documentary makers (José Peguero, Oscar Menéndez), who had saved these strong images of the Tlatelolco student massacre with mistrust. They agreed to donate them to the film. It's certainly a university film, proudly part of the first film program of UNAM (National Autonomous University of Mexico) through its film school (CUEC). I was very lucky, even Televisa collaborated with its historical archive.

Do you think THE CONVICT PATIENT opens in Mexico at the right time, now with the return of the PRI?

I think it's a film that could have been released 10 years ago or within 10 years. It's like October 2 (the Tlatelolco student massacre), I mean, there are unresolved matters, justice yet to be dictated towards the October 2 crimes. It's a film about memory, a film to remember, to make the new generations know and to keep alert my generation, which lived the last stage of the PRI.

The fact that a student movement like Yo Soy 132 appeared with the return of the PRI the year The Convict Patient premiered (2012)... I always wanted a current film, but the denounce is implicit. I wanted mostly a though-provoking film.

Can you tell me about the aspect with Carlos' family? It's a political film but also a very human one.

It's a tragedy for Carlos' family; the consequences of the failed murder attempt are very relevant for the family. Mr. Pedro (Carlos' brother) doesn't really want to know about anything, he's not interested in repairing the damages. On the other hand, he and Mr. Carlos are good persons with human quality. I wanted that in the film. The anecdote is really powerful but I didn't want only that; I wanted the character (Carlos) to be at the same level, as interesting and complex as the incident. 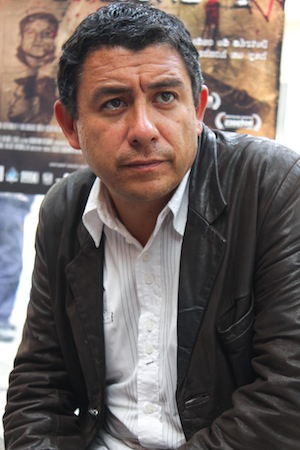 After finishing the film, have you heard about Carlos?

No, I looked for him last year but it's very difficult. I left him a card in a place I knew he visited, saying, "Mr. Carlos, I finished the movie and I would like you to see it." That would be through his brother, because Carlos visits Mr. Pedro's house.

Carlos watching the documentary is the cycle completion?

In a way, the fact that his story is being told gives him justice. I think he would like to watch the movie, I wouldn't doubt showing it to him but the effect is a mystery.

There's a scene with Carlos saying something like "let's stop talking, let's eat". Can you tell me a personal anecdote about Carlos that we don't get to see in the film?

That time we went to a Sanborns restaurant, he sat down, ordered scrambled eggs, orange juice, a milkshake and a Pepsi! I think he enjoyed the filming, he liked when someone gave him a microphone to talk to.

Of course there's a very thin ethic and moral line. I tried to help him, reaching a psychiatric institution for medicines, the shelter, but when he returned to the streets I said, "Mr. Carlos, if you go to the streets I won't be able to look for you again, but if you stay I will know where to find you, maybe the film can make a fundraiser." But that didn't happen.

Mr. Carlos is a strong man with character, but also a bit incoherent and in that sense complicated to interview. Still, he's very lucid.

Mainly when it comes to recall 1968. He remembers exact dates and names.

He remembers everything, how much time he was looked up in the "pavilion 5", which day he came out... everything! He even recalls reading Gustavo's article from La Jornada, and that was really impressive for me. I was thinking, when Gustavo finds out that Mr. Carlos read his piece, he won't believe it! The documentary is full of these things.

Without editing, like four different documentaries were created. I had to choose one. I have calls from the private detective, telling me "I'm seeing him, yes, no, wait, he's gone..." I have the calls recorded because the entire search was part of the documentary. I had to say, it's not the search but him.


The Convict Patient opens in Mexico on Friday, October 4.

(All photos by Claudia Aguilar Guarneros)