Alfonso Cuarón's Gravity opens in Mexico next Friday (October 18) and the director, together with his son and writer Jonás Cuarón, met with the Mexican press to present the acclaimed space film. Compared to Guillermo del Toro's Pacific Rim conference in Mexico City, Cuarón's was shorter and much calmer though also quite fun. It actually ended, unlike del Toro's, with the Mexican filmmaker signing DVDs and magazines for some journalists.

The thing is, sometimes the leading television networks in Mexico, which get to ask the questions in these events, don't hire the smartest reporters but rather unprofessional clowns. Still, Alfonso's answers were always clever or just plain hilarious! You can read the great majority of the conference right here, and don't forget to check out the photo gallery.

Q. I would like to start with the human side of GRAVITY.

Jonas Cuarón (JC): Our initial idea was to create a journey that kept people stuck to their seats for 90 minutes and, at the same time, in which we could discuss themes. The theme that interested us the most was adversity.

We wanted the journey of our protagonist, an astronaut lost in the orbit, to become a metaphor for adversities; that the audience could have this same catharsis through their very own adversities.

Alfonso Cuarón (AC): Jonás' theory, when we started writing the film, was to get rid of the narrative from almost everything, to make a very lineal, simple story with no subplots and little backstory. We bet on a tense, suspenseful journey, very visceral and primitive, that becomes archetypal.

We want the audience to be involved in such visceral way that it cancels the intellectual part, to make them connect emotionally with the character.

Q. Have you think already about the possible Oscar nomination or is it premature to ask?

AC: To tell the truth, I don't think or dream about it. It's still premature.

I'm not sure if Jonás rehearses his speech in the shower!

I wanted a very immersive experience for the public so the great prize for me is that people are watching and enjoying it.

AC: And on the big screens, because the long-life for every film is in different formats, but the total Gravity experience is on the big screen, in 3D with a great sound. Later, people will watch it on their phones but now is a great prize to see people going to the theaters. I don't care for box-office numbers but just for what that represents. I'm really happy about it.

Q. How was working with Sandra Bullock and George Clooney, two movie icons?

JC: For me it was a great learning experience.

Since we wrote the script we had clear the journey of both characters but it wasn't until they came on board that we began having conversations about character development. In this film, we invested everything in the protagonist and if not for Sandra we wouldn't have achieved that emotional connection with the audience.

AC: They (Bullock and Clooney) understood this was a movie with not many dialog. They got the concept immediately, that at any given moment the dialog could be fundamental.

I can't imagine Gravity without Sandra, and not just the final result but also the process. I have never seen anybody working like Sandra. Before the filming, this woman practiced for five months, doing daily exercise routines.

The technological conditions were going to be very demanding, so there was also an abstraction exercise because she was acting with nothing around. Everything was a matter of precise choreographies, rehearsed by her weeks before, as if she was a ballerina. Each position and the timings were programmed through computers that informed some robots placed in the cameras. She had to adapt to positions pre-established so it was a big challenge for her.

On the other hand, working with George Clooney and Sandra Bullock is a life insurance. There's no film critic who gives bad reviews to Clooney and Bullock because that's like shooting pandas! It's something you just don't do.

Q. Which were the technical and human difficulties while filming in outer space? Was it complicated? The cameramen felt dizzy?

AC: Yes. We took some cameras to the Soyuz (Russian spacecraft). We were about three and a half months in outer space.

I sucked for the training, felt dizzy, but up there I felt all right, unlike Chivo (cinematographer Emmanuel Lubezki)!

I have the proof we were there... there's a moment in the film when you can see a reflection of the team, you can see Chivo and me reflected in the (astronaut's) visor while floating in space. I'm not telling you right now which is the moment so you can do the freeze frame on the DVD. We were there (laughs).

(Telling Jonás) They don't believe it.

Q. What about the research you did in order to make a space movie? Who did you consulted?

It was an arduous process, making a lot of research, which began with books and articles. When we had a first script treatment, we began taking with astronauts and physicists. With the physicists, mainly to understand how microgravity works, as it's a complicated concept especially for me... I wasn't very good for physics in high school.

AC: That's why he ended being a writer (laughs).

We showed the first script treatment to an expert to see how dumb we were. Structurally, it didn't change; we just gave more sense to certain things. We had the concern to respect the technology used up there, not making a futuristic/science fiction story with made up spaceships. Since I was a kid, space technology has fascinated me.

Many advisers came on board, astronauts too. Sandra was in touch with the international station. We had clear to make everything as realistic as possible within our fiction. It's not a documentary. We exaggerated things but in a measured way.

Some of the astronauts who have seen Gravity went only for the emotional ride. Hubble telescope astronaut Michael Massimino was very excited when he saw the film, saying it was identical to reality. Jean-François Clervoy, a French astronaut, says it's the closer way to be in space while you're on Earth.

When criticism appears, remarking the things that couldn't happen, nothing is new to us. We already knew it thanks to our advisers, who told us "who cares? No one knows that!" How objects behave in microgravity is something we tried to make in full detail. That was the most difficult thing; our brains function to understand gravity but up there the behavior has nothing to with what we are used to. We had lessons with physicists but also computer simulations.

Q. Can you tell me about the short film Jonás did (ANINGAAQ)?

JC: Since we were writing Gravity, there was a moment with this character, who has been disconnected from Earth the whole movie, striking up a conversation with somebody on Earth, but they can't understand each other.

Then we came up with the idea of making a parallel short film to show another point of view of this scene, while still functioning by its own. We shot the short in Greenland and it will be part of the Morelia Film Festival 2013.

AC: The short has been part of several festivals and I think eventually will be available on the Gravity DVD. It offers a complementary view to the space journey; it's about a fisherman in the middle of a frozen ocean.

JC: (Greenland) Was the closest place to space we could think of; the experience of being in the middle of nowhere.

Q. How was the professional relationship between father and son?

AC: For me it was extremely difficult... for him, very easy.

JC: It was an organic process. I grew up with my father and my uncle Carlos, who were always talking about cinema. In college I started writing scripts, there wasn't anything else to do, as the only talked about movie stories.

AC: When we are working is a relationship of two writers. I have enjoyed the same with Carlos. We have similar experiences, so there are shortcuts and that's the advantage. There's no father and son while working.

Jonás brought new energy and a fresh passion for cinema, taking away from me prejudices. There comes a time when your films began earning acceptation and so you think you have important things to say and that entertainment can't go along with that. Jonás reminded me why I wanted to make films in the first place, the cinematic experience of going to a theater and being transported.

We wanted to make a combination of Steven Spielberg's Duel and Robert Bresson's A Man Escaped, which are apparently two opposite films: a black and white slow film and Duel, a movie with continuous action. But we understood exactly what we meant.

Q. Was the script written with Clooney in mind?

AC: It took us two years to develop technology and in that time we had informal conversations with many people. Aside of Clooney, the only other actor we had a serious talk with was Robert Downey Jr. He was attached to the project for a couple of months, but when we defined the technology it was clear Downey Jr. was not compatible with it. Downey Jr. is not a precise actor, and improvisation works great for him. Then we went after Clooney.

Q. (To Alfonso) What is your reaction to the acclaim GRAVITY has received from filmmakers like James Cameron and Quentin Tarantino?

AC: Over the years my films have gone to festivals, getting good and bad reviews, so one knows how everything works. I was only nervous two times: during a Gravity screening for astronauts and when I started receiving this feedback from some filmmakers I have admired my whole life.

It's not fair to mention names since they have called to tell me their personal experiences with the movie. I can say they are filmmakers that have marked my life and career, old masters that I have no relation at all with.

Today I got e-mail from one of these masters. After having a Lego Gravity trailer, the Saturday Night Live monologue and now this e-mail, I just can't ask for more!

(All photos by Claudia Aguilar Guarneros for Twitch) 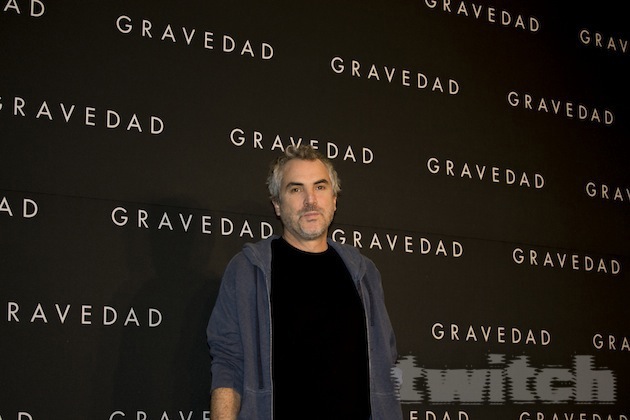 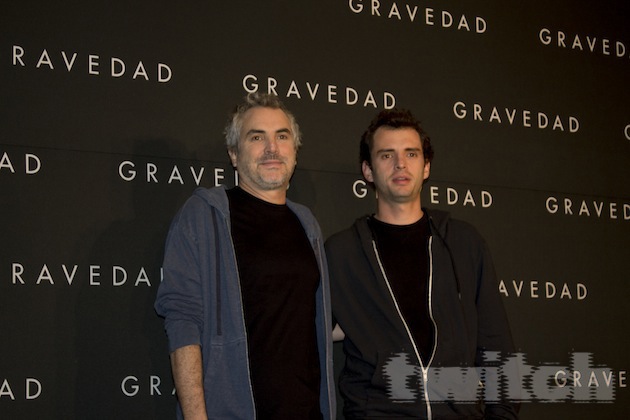 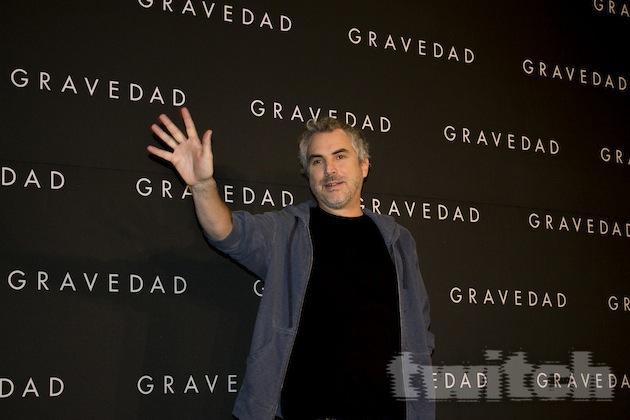 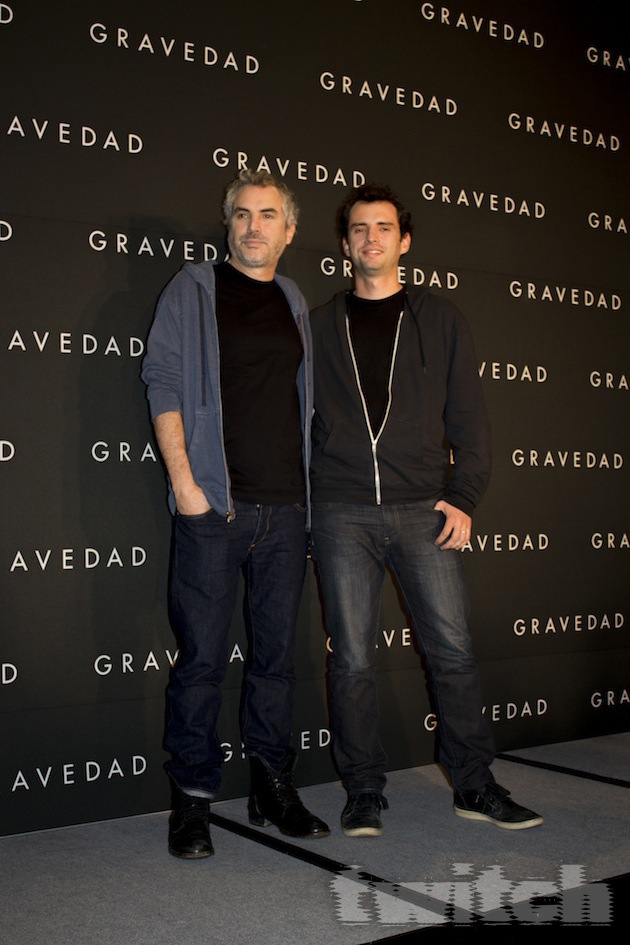