Destroy All Monsters: Regarding Prosthetic Vaginas 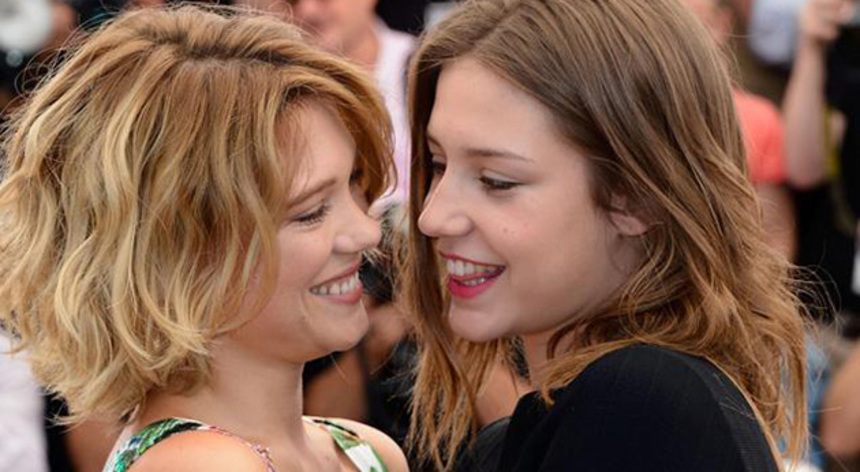 On the subject of prosthetic genitals, as used in a lesbian sex scene: what's the difference? The iceberg of conversation around Blue Is The Warmest Colour has the movie (as a movie) at its tip, while everything below the water line is about the film's six minute sex scene between its two principal characters, played by Adèle Exarchopoulos and Léa Seydoux. Consistently throughout the massive, massive, nauseatingly massive discourse around Blue's sex scene, there is always one proviso provided: but, everyone takes pains to point out, Exarchopoulos and Seydoux were wearing prosthetic genitals, lovingly sculpted from their actual genitals, but not, you know, their actual genitals. So it's not real sex.

It is in that proviso - the sly cuckolding of the entire conversation about the film with the notion that the sex scene in Blue is somehow, safely, "not real" - that tells you everything you need to know about the problem with sex's dominance in the Blue conversation in the first place. This unrelenting, laser-like obsession with sex, hidden behind a chaste, Victorian assertion that sex is dirty, itself hidden behind the painfully obvious undercurrent wherein claiming enjoyment of this sweaty titillation makes most people feel ashamed.

First off: let's call bullshit on the whole thing. I don't believe for a second that either actress was wearing a prosthetic in any shot in Blue Is The Warmest Colour where their vulvas were on display. If they were, kudos to the prosthetic artist; that person deserves the Oscar, though I doubt the Academy in its wisdom would ever have the [excuse me] balls to give out a statuette for prosthetic vaginas. But taking the production at its word for a moment...

Let's call bullshit on the idea behind the whole thing. Conduct the requisite thought experiment. Seydoux and Exarchopoulos are completely naked, except for a triangle of silicone covering their vulvas. Maybe it's larger than a triangle; maybe they are wearing silicone granny panties; maybe it's not silicone, but something else. The important part, though, is that something is covering their labia and thereabouts, and - this being 2013 and all - those parts (and their prosthetic duplicates) are shorn of any occluding pubic hair, and thus really look like labia and thereabouts.

The triangle of silicone covering the vulvas is what is keeping us from seeing the actress' real vulvas, but looks exactly like the actresses' real vulvas. If you believe the bullshit mentioned above, this prosthetic must also be thin and unobtrusive enough to pass muster on camera as the real thing.

As I remarked to my screening partner when I saw Blue Is The Warmest Colour at the Toronto International Film Festival: if you've got your nose right up your co-star's butthole, honestly - prosthetic or no - what difference does it make?

It makes none. Unless you are restricting the definition of "sex" to the only one that cannot, under any circumstances, apply in Blue Is The Warmest Colour's case - i.e., a penis entering a vagina - Exarchopoulos and Seydoux are having sex in Blue Is The Warmest Colour. Unless those convenient prosthetics also include steel plate that is keeping any neurons, on the part of either giver or receiver of the rubbing, licking and touching seen in the film, from perceiving any physical sensation, pleasurable or not, from either party, they're having as close to a sexual encounter as most people get in the average year.

There's a whiff of marginalization in the whole conceit, because it's so easy - for heterosexuals who don't know any better - to calmly assert that in the absence of traditional penetration, nothing untoward is happening between the actresses in Blue Is The Warmest Colour. Whenever it's the more normalized version of sexuality (penis + vagina = woo woo!), shown real-for-real in movies as far-ranging as Lust, Caution and Thriller: A Cruel Picture, then at least the "moral majority" can nod sagely and say, yes, that's sex. And then they can freak out about it being wrong and disgusting and whatever.

But thank heavens, in the case of Blue Is The Warmest Colour, they don't have to. It's just girls touching each other. It's not real sex, they're lesbians! Phew. And, they have those handy prosthetics keeping them from really touching each other, too! Double phew! It's not even real lesbian sex, it's fake lesbian sex by regular heterosexual girls with rubber vaginas, who wouldn't be having real lesbian sex even if they were given the opportunity to do so! Phew, phew, phew!

So instead, argue about whether the sex scene in Blue is overriding the conversation about the film as a whole; or whether director Abdellatif Kechiche abused his actresses in the way he directed the sex scenes in the first place; or whether the NC-17 rating will stop younger people from seeing the film and considering its themes. These aren't unworthy subjects, and they have the corollary advantage of nicely diverting attention away from any question of whether Blue Is The Warmest Colour is any great shakes as a movie.

Whether it is or not, however, Blue is touchingly representative of real life in the best and worst ways: it's long and largely mundane; it has one blisteringly hot moment of passion that has sustained a vastly disproportionate level of significance in the memory of the whole; and in our judgments of its characters and their behaviour, we're revealing far more about ourselves than we ever could about them.