Watch A Trio Of Clips From HARLOCK: SPACE PIRATE 3D 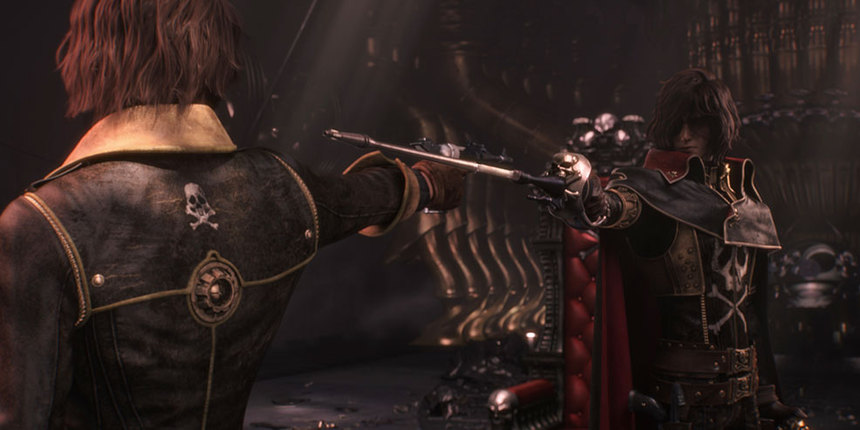 It was just a couple days ago that ScreenAnarchy was proud to present an exclusive clip from Aramaki Shinji's Venice selected animated feature Harlock: Space Pirate 3D - also known as Space Pirate Captain Harlock - and now that initial clip has been followed by two others.

Captain Harlock is the one man standing between the corrupt Gaia Coalition and their quest for complete intergalactic rule. Seeking revenge against those who wronged both mankind and himself, the mysterious space pirate roams the universe in his battle cruiser, the Arcadia, defiantly attacking and pillaging enemy ships. Gaia Fleet leader Ezra sends his younger brother, Logan/Yama, to infiltrate the Arcadia and assassinate Harlock. But Logan/Yama will soon discover that things are not always what they seem, and that legends are born for a reason. Harlock pushes his loyal crew forward in his death-defying mission to undo the "Nodes of Time" and reverse the Earth to an age when still inhabited by humans. It is the year 2977 and 500 billion displaced humans long to return to the planet they still refer to as home. The rebellious Captain Harlock and his trusted crew are mankind's only hope of one day righting the Coalition's wrongs.

Do you feel this content is inappropriate or infringes upon your rights? Click here to report it, or see our DMCA policy.
animeappleseedcaptain harlockclipscifishinji aramakispace piratetrailervenice