TIFF 2013 Review: THE STATION Aims For Creature Feature Greatness But Misses The Mark 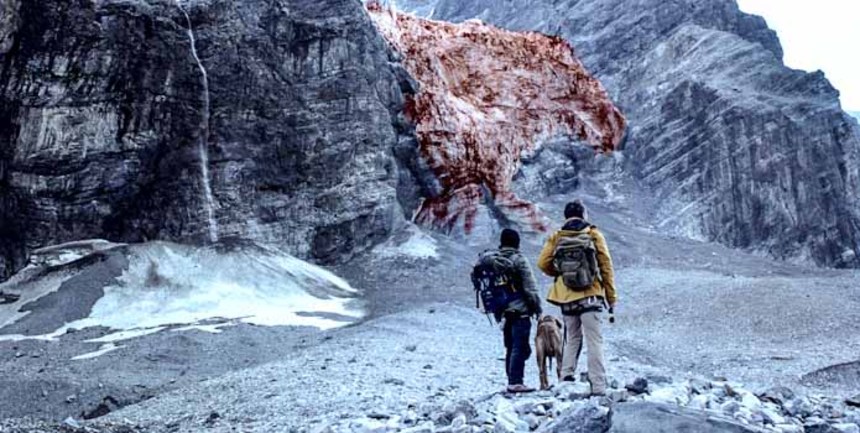 All of the ingredients are in place for The Station to be a thrilling exercise in crowd pleasing horror. You've got a hot young director in Rammbock's Marvin Kren being given a significant boost in resources to prove what he can do. You've got an absolutely gorgeous location to spread across the screen and give the film scope. And you've got a compelling central premise that promises thrills and chills a'plenty with a multitude of bizarre creatures for shock value. It's all there, all of it driving expectations that are never met with the film sadly ending up as just a pale shadow of the superior pictures which are its primary influences.

The action takes place high in the Austrian Alps, with a team of environmental scientists discovering a strange phenomenon known as 'glacier blood' dripping from the melting ice cap nearby. When glaciers 'bleed' like this in real life - and, yes, this is an actual phenomenon - the red liquid oozing out is typically some sort of oxidized material or algae growth but here, here it's something different. The melting ice has released an organism from the planet's far past, a sort of evolutionary driver that has the ability to blend the DNA of multiple creatures. Think of it this way: If a dog were to drink the glacier blood and then be bitten by a mosquito the dog and mosquito DNA would mix and result in an even split of the two creatures in one body. The possibilities are endless, and horrifying.

Discovering this phenomenon are a team of scientists largely cut off from the every day world, each with their own distinct agenda, along with their drunken - and extremely surly - maintenance man. The group as a whole are preparing for an important visit by government officials and climate change activists and any sort of mis-step could easily result in their work being cancelled permanently.

The Station initially impresses with the massive scope of its visuals, Kren taking full advantage of the massive vistas and the absolutely gorgeous surroundings that he is shooting within. The Alps, simply, are gorgeous, and it would seem that it is simply impossible to take any sort of shot within them that is less than gorgeous itself. But, sadly, it doesn't take long at all to realize that once you get over the view you are left with a collection of characters that are shrill in the extreme, under written and extremely unlikeable. There's nobody here to root for, nobody to care about, nobody who you don't wish would be eaten by the creatures in question within the first act of the film so that you can be rid of them and move on to something more pleasant. It's like the entire cast begins with their volume turned up to eleven and there is never any room for subtlety or development.

Which means that rather than rooting for the humans you're left with nothing to root for but the creatures, which would be fine given that this is a creature feature, after all, but for one important fact. The creature effects just aren't good enough. Kren's design work is engaging but in making the admirable decision to execute as many creature effects via practical means as possible - i.e. they build 'em rather than relying on CGI - he neglected to find a creature workshop capable of actually making these things work. Far too often the human characters are being 'attacked' by creatures which obviously cannot actually move and therefore pose no actual threat, Kren having no choice but to resort to rapid, jerky camera movements to try desperately to create the impression of energy and threat where neither actually exist.

Saddled with unlikeable characters and ineffective creatures The Station is left with nothing, really, but the impressive views. And while I like looking at a mountain as much as the next guy that's not at all what I came here to do.