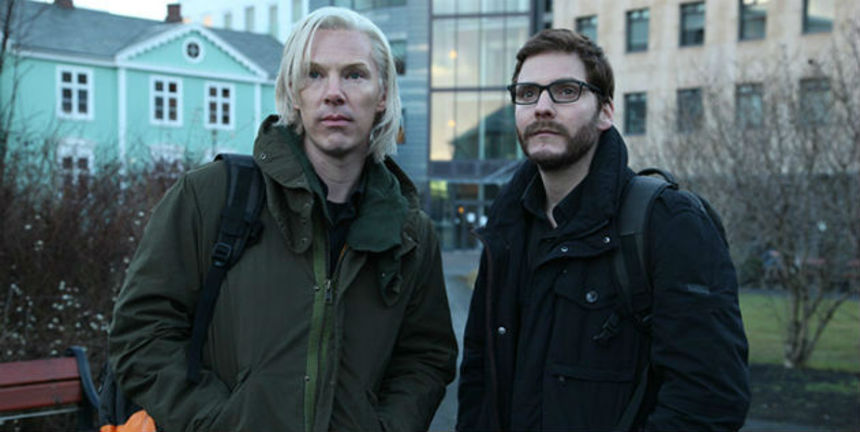 Over the weeks leading up to the Toronto International Film Festival, I've been asked repeatedly about the choice of this film as an opening Gala. Many have questions whether the opening film somehow speaks to a great theme at the fest, as if a single title can speak for the hundreds of films from all over the world that descend into this city for this pretty remarkable festival.

Still, it's a reasonably fair question, as usually the opening Gala was reserved for something either mediocre or resolutely Canadian, often a combination of both. Over the last couple of years, they've shown pretty miserable films about Darwin, but also interesting docs about the band U2 as well as last year's Looper, a film that ended up being my favourite for the entire year, period.

So, does choosing a film about Wikileaks founder Julian Assange say something about the current state of international cinema? Well, no, not really. Nor, unfortunately, does the film particularly assist with the debate about this new form of journalism and/or treason, depending on whom you side with.

It's also worth noting that the title of the film may be particularly amusing for generations of Canadians who have grown up with a CBC television programme of the same name - I'm sure I was not alone when I thought for a very brief moment that an investigative television show that's been on our national broadcaster for almost 40 seasons was somehow co-opting the black tie opening slot.

Still, aside from this silly confusion and the aura surrounding the story and the glamous position as the first official film of TIFF, how's The Fifth Estate as, you know, a film? I think it's fair to take a middle ground, something along the lines of "pretty good".

The real draw for the film isn't the drama surrounding it but the enticing and almost albino-like visage of Benedict Cumberbatch railing in an Aussie accent about truth, justice, and the "mainstream media". If casting accomplishes much of the heavy lifting of any good work, then Bill Condon at least did this part right. Cumberbatch is excellent as always, making even the most awkward of prose presentable within the context of the narrative. It took a while for me to accept Daniel Brühl with a beard, but he too does an admirable job in an even more structured role, his character often providing little more than emotional beats or expositional narration.

I admit it's unfair to completely slam a film that tries to speak to both the masses and those that had actually heard of the site before the Manning files were released, but the film's visualization of data, of networks, even of so-called "hacking" seems already patently dated. I can't provide better ways that such elements can be incorporated, except to say that in David Fincher's The Social Network the mileua of the desperate and sleep deprived programmer seemed mildly believable, whereas here I simply couldn't suspend disbelief when talk turned to FFMpeg and Final Cut as a way to enhance images, while they're sitting in front of Dell machines, some running Windows XP.

Nerdy, yes, but also lazy and frankly inexcusable. This isn't quite the "Unix, I know this!" from Jurassic Park, or Sandy Bullock traipsing through 1995's The Net, but we shouldn't have to see Matrix-like desks with batches of Cumberbatch in order to visually represent how computer networks operate. There's loads of inherent drama in a story that's shirked off to brief asides or foggy flashbacks, while the more bureaucratic elements such as story meetings at a newsroom are treated with a somber-scored gravitas normally reserved for invasion talk in the White House situation room.

More tedious are scenes of flying text chat sessions and dreary voiceovers, as two men sit across from a table IRC'ing to maintain some level of security. The visual flourishes don't help, they hinder, and frankly will inevitably date the film even more prematurely save for only the most Luddite of viewers.

Still, in fairness, the film does manage to have Assange's character come across as slightly more than the two-dimensional figure he's often portrayed as. There's merit to some of his madness, to be sure, and the Joker-like, "how did I get this scar?" discussion about his white hair was an interesting touch for the audience to speculate upon before the film made a declarative statement about the facts of the matter. Whether factually true or not, on a cinematic level is does little to make us feel one way or another about our characters, and this is the flaw that runs throughout the film. With needless sidesteps to fictionalized rescues from Libya, through to a closing, highly self-referential scene, it all feels forced, lacking any dramatic or narrative subtlety, bludgeoning the viewer with one rote scene after another.

I guess it all comes down to what one comes to a Wikileaks movie about in the first place. As the film admonishes at the end, if you want the "facts", you're encouraged to go find them out yourselves. As an introduction to the events that led to the rise of the site, the film may be simplistic and overly contrived, but it may in fact spark some discussion by those that are only aware of the white-haired man's notoriety. It still can be considered frustrating that the movie leaves plenty of meat on the bone - there are brief teases on the end credits text to some of the more sordid parts of the story, including the reasons for Assange's extended stay at the Ecuadorian embassy in London and the entire Manning trial, and despite many attempts doesn't go nearly far enough to get to the heart of the cult of personality of Assange that developed, as well as the swirls of hypocrisy on so many more levels that have come to the forefront since the events in the film took place.

Still, I'm over-thinking this film that frankly doesn't particularly warrant it. The Fifth Estate proves little more than a showcase for the acting talents of a supreme mime in the form of the lanky Cumberbatch, and despite some florid and at times annoying flourishes, Condon manages to showcase enough of this performer in a positive and compelling enough way that it's sure to get its share of attention come awards season.

Do you feel this content is inappropriate or infringes upon your rights? Click here to report it, or see our DMCA policy.
Benedict CumberbatchBill CondonJulian Assangetiff 2013Toronto International Film Festival

More about The Fifth Estate