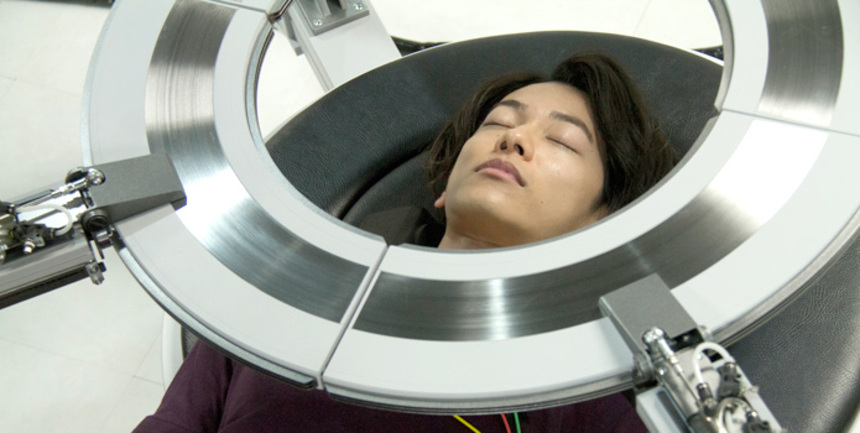 Acclaimed Japanese director Kurosawa Kiyoshi - a great favorite around these parts - ends a five year absence from feature films with 2013 effort Real, the story of a young man granted the opportunity via high technology to project his consciousness into the mind of his comatose lover in an attempt to restore her to health. Unfortunately he happens to tell this story just a year after Lithuania's Kristina Buozyte tackled the exact same premise with her astonishing Vanishing Waves. Even more unfortunately, Kurosawa's film isn't nearly as good.

Rurouni Kenshin star Satoh Takeru stars as Koichi, a young man whose seemingly perfect life is shattered when his girlfriend - a celebrated manga artist played by Ayase Haruka - attempts to take her own life. Nobody saw such an action coming. Nobody really knows why she did it. And while the attempt was unsuccessful she has been left in a coma ever since.

The chance to save his comatose lover - or at least gain an insight into why she did what she did - comes in the form of a radical new technology known as sensing in which the consciousness of one mind can be projected into the mind of another. The theory is simple enough: If there is no physical reason why a patient is remaining in a coma - as is the case here - there must be a mental one and if you can reach directly into the mind then perhaps you can effect change and draw the patient back out.

This is Koichi's hope as he enters into the mind of his stricken mate, that he can navigate her subconscious, find out what happened and why, and put things right. But all she really seems to want is for him to find and bring her a picture of a dinosaur she drew many years earlier.

With its themes of isolation and the subconscious made tangible - to say nothing of the rich visual possibilities raised by the idea of one mind entering another - Real would seem to be absolutely ideal territory for Kurosawa, a director who has built his career on such matters. And so it comes as a major disappointment that the film simply fizzles into a sort of damp mass. There's no one element to point to and say, "Here's what went wrong," but clearly something has, or - more likely - several things have to small degrees that manage to accumulate until the overall effect is a picture that unfolds seemingly over a numbing distance.

There's simply not ever enough to care about here, no relationship seemingly worth saving between the young leads. Whatever threat there may be with the minds merged, whatever surprises may lie in this world where anything can supposedly happen, lacks any sense of urgency. And thirteen years after Tarsem Singh made a populist version of this concept with The Cell the ideas driving the film are just not nearly fresh or exciting enough to hold the interest bereft of characters we actually care about.

As high as Kurosawa's high points have always been - which is very - the man has proven himself to be capable of some significant mis-steps in the past and with its blandness leaving Real as a film that fades from the mind almost as soon as it is over, this is certainly one of them. Not his lowest point, by any means, it is however a film that will likely produce the least reaction of any in his filmography as any others I would point to as bigger mis-steps at least have moments and goals that would trigger conversation while this simply drifts away. And that may be the biggest problem of all.