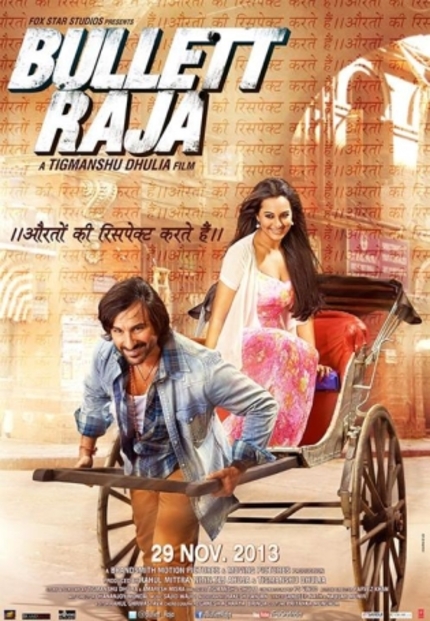 First of all, that is a terrible poster. What the hell were they thinking?

Anyway, Tigmanshu Dhulia returns to the director's chair after the critically acclaimed Paan Tomar Singh and Saheb Biwi Aur Gangster with a more standard looking masala film, Bullett Raja. This one has been in the works for a while, and while the trailer isn't anything too outside the box, there are reasons to believe that the film could deliver something beyond its rather common exterior.

Tigmanshu Dhulia is a very good writer and director, and this bodes well for the film. He has plenty of experience putting together Bollywood masala movies, including surprise hits like Saheb Biwi Aur Gangster, but he can also write the more serious stuff like Paan Singh Tomar and his early writing project, Mani Ratnam's Dil Se.

The other thing that draws me to this film is the cast, which may not have been the case even one week ago. Saif Ali Khan is all over the promotional material and trailer, but it is the face that shows up two thirds of the way through this footage that has me salivating. Hot off of a major success at Fantastic Fest, Commando's Vidyut Jamwal has taken up the role of villain in Bullett Raja, and that's something to look out for. There are a few glimpses of his amazing physical prowess in the trailer, but I can imagine that they put him to work now, and with his new-found international notoriety, they'd be silly not to.

Bullett Raja opens worldwide on November 29th, but you can see the trailer now.