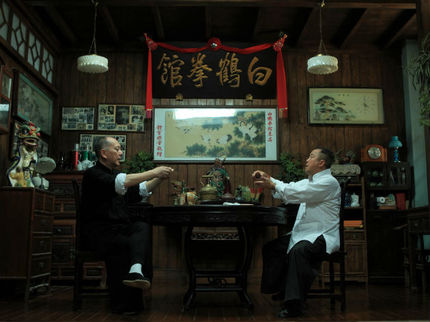 Herman Yau directs Anthony Wong in this low-key but enjoyable drama focusing on the twilight years of Ip Man's life. Less an action movie than a love letter to 1950s Hong Kong, the film nevertheless cements the man's position as a modern day folk hero.

Another week, another Ip Man movie, or so it certainly seems, with Herman Yau's latest arriving so soon after Wong Kar Wai's The Grandmaster. After Donnie Yen and Wilson Yip brought the wing chun master to life so successfully in 2008, there have been four more bona fide Ip Man films, including Yau's own "prequel", The Legend Is Born: Ip Man from 2010.

The Final Fight begins with an elderly Ip Man (Anthony Wong) returning from a visit by his most famous student, Bruce Lee, recently back from Hollywood, where he has become an international movie star. In flashback, we are transported back to the early 1950s, where the Foshan native is teaching wing chun to a close knit group of students, played by Timmy Hung, Jiang Luxia, Gillian Chung, Chow Ting Yu and Jordan Chan. Despite regular antagonism from other nearby martial arts schools, Ip Man teaches his students the virtue of fighting, not to get into scraps, but to improve your inner strength and harmony.

Wong cuts a stoic figure as the aging Ip Man, living a modest life compared to his affluent upbringing in Foshan. His wife (Anita Yuen) visits briefly from the mainland, but is soon called away to care for their son, who is at university. While his students tend to his daily needs, Ip becomes smitten by a sultry young club singer (Zhu Chouchou), for whom the feeling is mutual.

However, violence inevitably intervenes and forces Ip Man out of retirement. First, he must square off against the master of a rival school (played with comedic relish by Eric Tsang), but the film builds to the clash of the title, against infamous Walled City gangster, Dragon (Hung Yan Yan).

Yau's films clearly have the blessing of the Ip family, with Ip Chun (son of Ip Man) appearing in both films - this time even cracking a meta gag by talking to himself on the phone. What is more interesting is how the stories told about the man are veering increasingly far from the truth, and Ip Man is evolving from historical figure into a folk hero of almost legendary status, rivalling the likes of Wong Fei Hung.

The Final Fight is clearly working with a smaller budget than the Wilson Yip movies, and aerial shots of old Hong Kong look rather hokey, while the central street set often looks less than authentic, but the film is not without its visual flourishes. There's a smart sequence in which the clashes between Ip's school and their rivals are re-told by a local columnist, and recreated onscreen in an old timey newsreel style, depicting Ip Man as a soaring god-like figure. The final clash within the typhoon-ravaged alleyways of Kowloon's Walled City is also vividly recreated.

While there is no escaping the fact that many of the characters are portrayed by actors not known for their martial arts prowess, everyone throws themselves into their roles admirably, with mostly successful results. Wong and Tsang are particularly convincing, while Gillian Chung less so, and the fact that recognised practitioners like Hung and Ken Lo are cast as the villains only heightens the tension in their climactic clashes with the less able leads.

Martial arts aficionados may well take issue with these casting decisions, but the film is ultimately less interested with the action and more committed to recreating a particular period in Hong Kong's eclectic past. The soundtrack features a number of classic Mandarin pop tunes from the era, while the script touches on social issues of the day, including union strikes, water shortages and police corruption. But peppered throughout are commendably staged flourishes of martial arts - a lion dance competition is particularly cinematic - that help Ip Man - The Final Fight stand its ground amongst the increasingly crowded canon of Ip Man films.

Review originally published during the Hong Kong International Film Festival in March 2013. The film opens in select theaters in the U.S. on Friday, September 20.