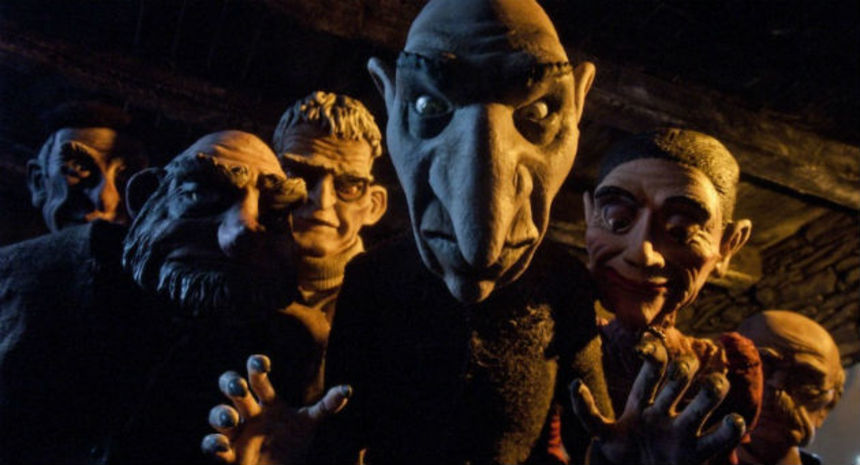 As delightful as it can be to watch stop-motion animation on the big screen, it can't entirely cover up other areas where a film may fall short.

Case in point: the eminently watchable yet only intermittently compelling Spanish stop-motion animated feature O'Apostolo (English title: The Apostle). It is a slight, ghostly fantasy that is definitely bolstered by its beguiling, hand-crafted appearance. From a narrative standpoint, though, the film dawdles when it could be exploring either the characters or its surroundings more closely, forcing the superior third act to start over, story-wise, in order for its resolution to have any impact.

The set-up is good: two career thieves escape from prison so they can recover jewels that one of them has hidden in a boarding house in Xanaz, a tiny village whose inhabitants strike him as a bit "too nice." The other thief, Ramon (voiced by Carlos Blanco), makes it to the village alone, but is so preoccupied with finding the jewels that he fails the notice the abundant warning signs that all is not what it should be in Xanaz.

The village has been carved out of a thick-wooded interior area of Galicia in northwest Spain, and it appears to be wintertime, since all the trees are bare of leaves. The town is adjacent to the Way of Saint James, a road for Christian pilgrims to travel toward Santiago de Compostela, the capital city of Galicia, so it makes sense for Ramon to pose as a pilgrim.

After such a promising set-up -- mysterious woods! religious themes! -- it's disappointing when all Ramon does is stumble around town looking for the jewels. He's already spoken about his desire to find a more peaceful life -- why doesn't he consider Xanaz as a possibility to start over again? What exactly is he looking for? Why is he not particularly religious? Does he lack any curiosity at all? Are we meant to sympathize with his situation as an "innocent" visitor or empathize with his life course as a career criminal? If so, why?

Characterizations matter as much in stop-motion animation as they do in live-action features, which is one reason why I always rooted for King Kong over his captors, and Ramon simply doesn't have enough of a personality to root for his success or failure. Coupled with the slack pacing, that leaves plenty of time to contemplate the rich veins that the film chooses not to mine.

I don't mean to harp on these things, but it's also puzzling why the Archbishop of Santiago de Compostela, a blustery, demanding sort well-voiced by Paul Naschy (among his last performances before he died in 2009), is not introduced earlier in the narrative. He adds some much needed levity.

Admittedly, all these concerns might sound nit-picky, but, added up, they detract from what is otherwise a perfectly agreeable supernatural story. O'Apostolo may well please children of all ages who are happy to set aside such concerns to sink into a Spanish fantasy featuring lovely, dark stop-motion animation -- and theme music by Philip Glass!

Do you feel this content is inappropriate or infringes upon your rights? Click here to report it, or see our DMCA policy.
animationFantastic FestFernando CortizoFF 2013Paul Naschystop-motion