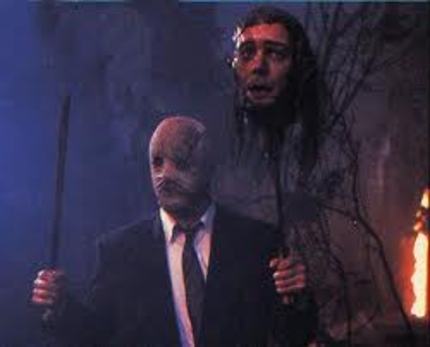 Cinema culture is all but overrun with alternate versions of cherished media. Remakes, reboots, and director's cuts vie for the attention and dollars of fan communities who hope for the best but too often get the butt end of someone's desire to make yet another buck off a forgotten film or franchise.

So when someone comes along claiming that a new cut puts a film in a significantly new light knowledgeable fans and cineastes can hardly be blamed for taking it with a grain of salt.

But when such claims turn out to be true? The satisfaction is palpable. And in this case it could hardly happen to a better person.Clive Barker has been given notorious short shrift by Hollywood for years seeing truly great adaptations of his work alternately buried (Midnight Meat Train [2008]) buried or butchered (Night Breed [1990]). The latter which was supposed to capitalize on the major success of Hellraiser (1987) and cement Barker's career as a filmmaker, was instead recut by Morgan Creek in the hopes of turning it into a simplistic monster movie. This of course was the exact opposite of Barker's intention having drawn his inspiration for the film from his richly detailed and psychologically complex book Cabal. Now with 45 additional minutes added thanks to the tireless efforts of superfan and restorationist Russel Charrington Nightbreed emerges as a far more satisfying narrative giving the world of Midian length and breadth and depth.

The new cut can't be given enough credit in the way it brings Barker's original vision to life. The Midianites are far more fleshed out and the motivations of Aaron Boone, and the Doctor  follow a far more linear path. More importantly the idea that the Midianites are heroes is given much needed room to breathe.

The term "deep horror" has been around since at least the eighties and though I haven't been able to track it down to origins I know I used to encounter it most often around the time that Barker's Books of Blood hit. The idea was that to understand horror you had to follow it thru on it's threats, to the end and get your own hands dirty if necessary. In other words, take a long hard look at what really scares you and you might come closer to understanding it. This version of Nightbreed is worth that trouble and then some.

Do you feel this content is inappropriate or infringes upon your rights? Click here to report it, or see our DMCA policy.
Cabal CutClive BarkerFantastic Fest 2013Nightbreedreview