You've heard the story... happened to a friend of a friend, I swear. Girl had a one-night stand with a mortician and the next day she found maggots down there. Disgusting right? Oh she's a friend of a friend of yours too? We must know the same people! Just what happened to her after that?
With his latest film, writer/director Eric England gives the urban legend a body horror spin. If his answer to the question above is a bit raw in places, it is nonetheless quite effective and definitely worth your time.
Her name, in Contracted, is Samantha, and the basic components are more or less the same. A night spent with a sketchy man (V/H/S co-director Simon Barrett) leads to three subsequent days of horrified regret. Here, hangover shame gives way to bodily decay. Maggots down south are only the beginning in this film where blood tumbles freely from any and all orifices, where rashes grow quickly and with malevolence, and parts that really ought not to fall off start. All because of that one, sordid encounter.
Contracted is being positioned as a gross-out shocker, which it to some extent. But to consider it only as such belies the film's slow burn structure, and does a tremendous disservice to England and lead actress Najarra Townsend's rich character work. The real surprise of the film is not a unique inventiveness with gore (it isn't especially), but its cutting insights into character and social setting.
Let's take the film's opening moments. We find our lead hesitantly entering a party for reasons that are soon made clear. Samantha, a waitress and aspiring floriculturist, has been absent from this social group for some time, ever since moving in with a new girlfriend. Now, her relationship on the rocks, she makes an uneasy return to the social circle she thought to have had cast off, and is ever reminded of it. Part of her unease also stems from this group's ample love of drugs and liquor, which isn't great for someone in recovery.
England captures the rhythms of early 20's life with confidence and skill. The contractions and expansions of a social circle, the dead-end jobs, the ability to try on new roles (Samantha proclaims her lesbian identity as often and loudly as she can, always to provoke never to inform. What did they say about the lady protesting?) so well that barely five minutes in, we already understand a great deal about who she is and where she's coming from. 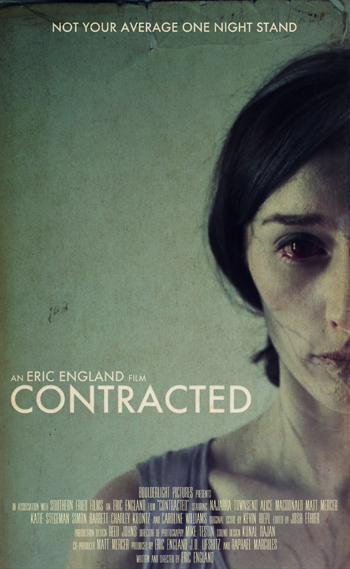 Among the things we learn rather quickly is that she's not the most sterling of characters. She is rude and surly, confrontational and thickheaded. She is, in short, a realistic early 20s dick. Most of the characters in Contracted are kind of unsavory - dickish, selfish or just plain cold - and it's to the film's benefit. It's more interesting for the ensuing horrors to fall upon a real person instead of a squeaky-clean martyr.
The horrors are not all supernatural, mind you. The biggest discrepancy between the film proper and its marketing materials is the nature of the inciting sexual incident. While it's sold as a cautionary one-night-stand tale, England unambiguously depicts a rape. Samantha is drugged and taken advantage of, all vocally against her will. While its understandable for marketers to elide this unsavory plot point, what's more interesting is how the film itself skirts around it. Samantha never once addresses the event for what it was, and nor does anyone else. The bluntness of what happens to her met with the radio-silence that follows (she even assumes a large brunt of the blame) would be eyebrow raising were it not for the strong themes of myopia and denial that course through the film.
Every character in Contracted is lying to him or herself. Sam, of course refuses to treat her bodily decay, hiding her bloodless face under makeup and sunglasses. She does so to try and get back with girlfriend Nikki (Katie Stegeman), who's more like ex-girlfriend Nikki, if only Sam would admit it. Equally bullheaded is Riley (Matt Mercer), a wannabe paramour who shows up nearly everyday at Sam's restaurant, sitting at her table, knowing that she may have cruelly rejected him yesterday and the day before, but that today, today will be different. I could go on, but I think you get the picture.
It's in this context that the effects of Sam's violation take hold. Her body rots, and we get our Cronenbergian kicks at its grotesque transformation. But the monster she becomes - preying on friends and family, lying to herself and others - is a more direct carry over from her addict past. Bad things can happen to so-so people, Contracted argues, but the worst demons are the ones residing within.
Tweet Post Submit