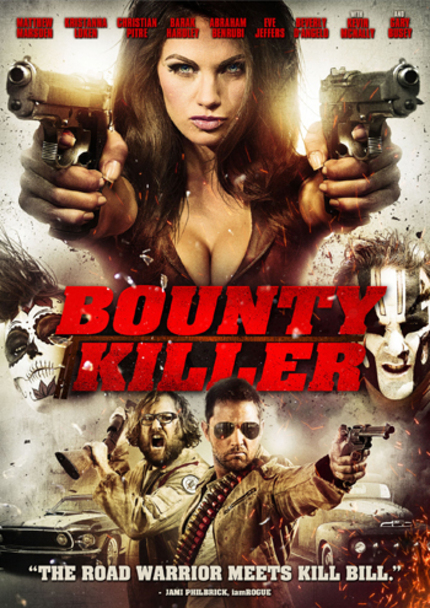 Henry Saine's Bounty Killer is coming to cinemas and VOD on September 6th. The film has been well received on the festival circuit, including a much talked about screening at Fantasia a couple of weeks ago. I was still hearing the buzz about it when I arrived in town days later.

To help prepare you, we have an exclusive clip to share. In the clip Christian Pitre as Mary Death and Matthew Marsden as Drifter square off against each other and a gang of corporate thugs toting machine guns a plenty.

It's been 20 years since the corporations took over the world's governments. Their thirst for power and profits led to the corporate wars, a fierce global battle that laid waste to society as we know it. Born from the ash, the Council of Nine rose as a new law and order for this dark age. To avenge the corporations' reckless destruction, the Council issues death warrants for all white collar criminals. Their hunter's - the BOUNTY KILLER. From amateur savage to graceful assassin, the BOUNTY KILLER'S now compete for body count, fame and a fat stack of cash. They're ending the plague of corporate greed by exterminating the self serving CEO and providing the survivors of the apocalypse with retribution. These are the new heroes. This is the age of the BOUNTY KILLER.

Guest contributor Bill Graham (No. Not the Evangelist. Can you imagine!?!) caught the film at the Dallas International Film Festival earlier this year and had this to say in his review...

Right from the start, you'll likely know whether you want to continue down the hilarious and overly violent schlock that is part of Bounty Killer's charm... There are few films that can get away with so much silliness. There has to be commitment from the ground up, and that even carries over to the music. With a silly brand of inventive and violent humor crossed with the freedom of the post-apocalyptic setting, Bounty Killer is a hell of a good time that never takes itself too seriously.

And stay tuned because we hope to speak with Henry Saine about his film in the coming days.
Tweet Post Submit