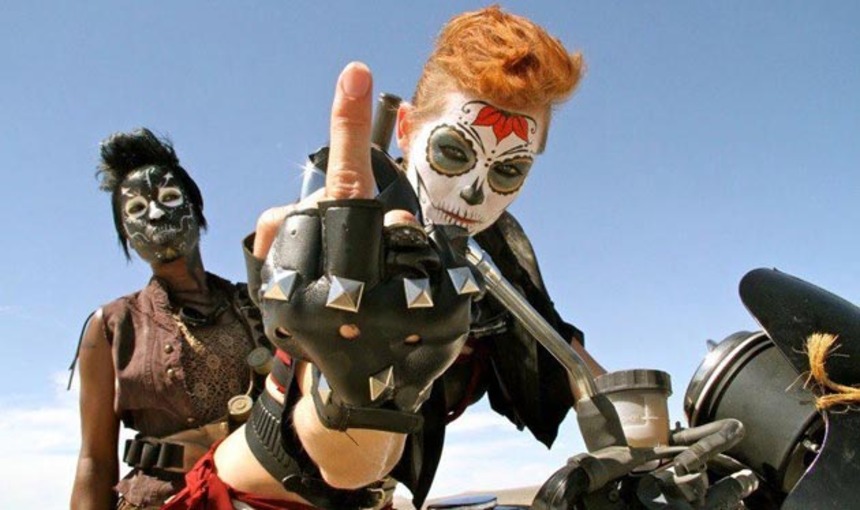 Right from the start, you'll likely know whether you want to continue down the hilarious and overly violent schlock that is part of Bounty Killer's charm. We are given a world where bounty killers--bounty hunters with the license to kill off the white-collar criminals in a post-apocalyptic wasteland of the United States--are rock stars and adored. They appear on magazine covers, have groupies, and reap wealthy rewards for dispatching the bad guys that ruined the world's economy and environment. Is it a film that has more relevance today than ever before? Well, maybe it would have been better timed a few years back after the stock market crash, but writers Jason Dodson, Colin Ebeling, and Henry Saine were likely working on the original idea around that time just the same. 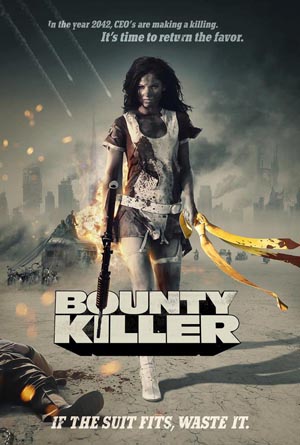 There's hilarity in the inventiveness. Yes, it's schlocky and full of cheese. But there's also a lot of fun to be had when it isn't over-burdening itself with trying to tie together the loosely connected story threads. We follow two leads, Drifter (Matthew Marsden) and Mary Death (Christian Pitre) throughout, who happen to have a history together and are now friendly rivals. Within this world of death and destruction is a role called the gun caddy. Yes, it's exactly how it sounds. Instead of having a humorous sidekick that serves very little purpose, the writers came up with a way to give him a role. Trying out for Drifter's gun caddy is the overzealous Jack LeMans (Barak Hardley), who has a hilariously bad trial period. He drops guns, doesn't pay attention, and gets himself in trouble. When Jack is captured at one point and facing cannibalism, he remarks on his overweight body by claiming "They're going to love me. I'm so marbled."

He's here to have fun, and in this world we see most of the death dealers show little concern for how dangerous the world is. They often run into gunfire headfirst. That means there is rarely a dull moment. Thankfully, with all of this action, Bounty Killer pulls it off with some violent flair. In particular is Mary Death, who doles out punishment in creative ways that give her skimpy outfit some utility. Those high heels? Of course they should also hold a knife or two. And sex appeal is worked into her character's persona that's part of her rock star role. She even has a badass car (complete with her likeliness, in pinup style) and motorbike. If you're going to ride across the barren post-apocalyptic wasteland, you've got to have a great ride. When the Gypsies get involved, we are given a plethora of muscle cars that look like they came straight out of a Mad Max film.

Impressively, Bounty Killer sports a pretty nice supporting cast including Krisanna Loken, Eve, Gary Busey, Beverly D'Angelo, and Kevin McNally. They're all having a lot of fun here, particular Eve who plays the leader of a gang of Gypsies dressed as Dia de Los Muertos participants. One of the best sequences actually is one of the quietest, as soundproof glass obstructs the violence that ensues on the other side while two people argue. There are few films that can get away with so much silliness. There has to be commitment from the ground up, and that even carries over to the music. With a silly brand of inventive and violent humor crossed with the freedom of the post-apocalyptic setting, Bounty Killer is a hell of a good time that never takes itself too seriously.

Do you feel this content is inappropriate or infringes upon your rights? Click here to report it, or see our DMCA policy.
Dallas IFFDallas International Film Festivalindiemidnighters