Review: OUR NIXON Offers A Rare Glimpse Into A President's Soul 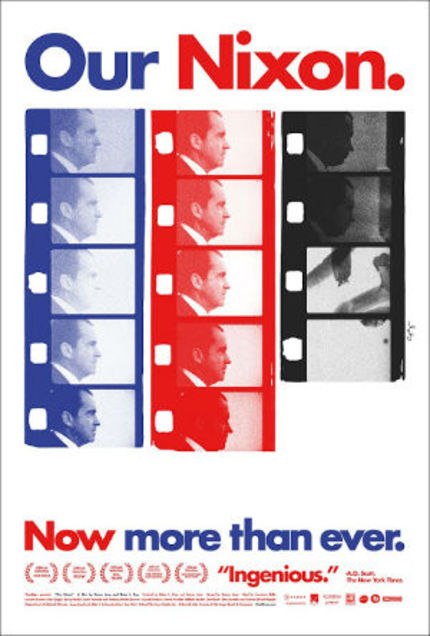 He definitely is ours, like it or not. Richard Nixon may no longer be seen as the staid and calculating everyman with the nation's best interests at heart he appeared to be when he crushed George McGovern in the 1972 elections, but he remains a singularly symbolic figure in the American political landscape.

As a child of the 80s, I was spared the tortuous relationship with Nixon that my parents seemed to have (disgust, for the most part) and it was only through watching Our Nixon that I began to understand why he evoked such extreme reactions from both sides of the political spectrum. The man was both incredibly paranoid and very naive. He was our president. It was a big deal.

It's rare to be able to watch a new documentary that becomes the film about an old and well-known subject. Our Nixon, comprised largely of White House insider HR Haldeman's super 8 films coupled with copious excerpts from the famous audio tapes Nixon covertly made of everything that occurred while he was in office, is for me the definitive story of the 37th presidency. For so complex a subject, it is remarkably efficient. By limiting the number of talking heads to those directly involved in the narrative (Haldeman, Dwight Chapin and John Ehrlichman, for the most part) and by humanizing Watergate's principal players, we are spared the musty outrage and confusing explanations of the scandal that have elicited many a tenth grade history class yawn. Here, the main character is a crazy person. That's entertainment.

'Crazy' is a simplification, of course. The Nixon that is evoked in Haldeman's reels is a workaholic, stern 1950's father-type who surrounds himself with old college buddies and people who owe their entire political careers to his discretion and loyalty. Haldeman and Chapin were ad executives from Los Angeles with no political experience before being awarded posts in Nixon's cabinet. Ehrlichman was a lawyer by trade. A large part of the first part of the film consists of the trio's chummy reminiscences about the 'magic' of that first year. The super 8 film shows them laughing, boating and attending staff meetings. It is only placed in the context of the cultural upheaval occurring in America during that time - thankfully Our Nixon spares us the generic montages of hippies/MLK/Vietnam that usually go hand in hand with any mention of 'the 60's' in documentaries -- that Haldeman's largely mundane films attain the eerie sense of pathos that makes them interesting.

The super 8 is very pleasant to look at, but there's not really much going on. (Pat Nixon has a couple great expressions, however). The real meat here is the insecurity that is revealed in Nixon's secret audio tapes. The tapes have long been old news, but here they are given fresh dramatic impact by Our Nixon's technique of showing a very famous public speech nearly in its entirety and then supplementing it by cutting directly to an audio-only segment of Nixon's self analysis over the phone to his closest aides.

These speeches are hokey political performances, but with the addition of Nixon's honest take on them moments after they happen, they acquire a depth that would have been completely lost to history had the tapes gone missing. To have direct evidence of the most powerful man in the world's fear, pride and strange preoccupations is a privilege no other president has given us. We also get to hear Nixon's dissatisfaction with TV show All in the Family on account of its (supposed) promotion of homosexuality for good measure. What I wouldn't give to have access to the secret tapes of every president.

Unfortunately (or fortunately) this will never happen again. There are lessons in Our Nixon that have long since been learned. The entire Watergate affair, which takes up the last third of the film, boils down to a president underestimating the power of the media to influence politics in the USA. Nixon naively believes he can either physically force the media to keep quiet (by paying someone to break into offices and steal files) or that they will leave him alone by virtue of all of the good he believes himself to have done, and his downfall as portrayed here is a result of clumsiness as much as hubris. Nixon seems to have truly believed his tapes would either edify or exonerate him rather than condemn him. I think few subsequent presidents have made the same mistake.

For those who see politics as a power game in black and white, Our Nixon's focus on the humanity behind the throne might be frustrating. After all, Nixon dutifully attended his daily meetings and talked smack about Kissinger's philandering while thousands died in Vietnam. For those who remember Nixon fondly, it may be tedious to watch yet another movie detailing his disgrace.

But political allegiances are irrelevant here, as President Nixon represented the entire country. Our Nixon focuses only on that time period for which he was in office. By limiting its scope, the film expands its relevance. Deft editing and unprecedented access here combine to create a political documentary with a narrative arc and visual beauty that would be compelling in a work of art. Rarely have mainstream politics been so interesting.

The film opens in select theaters in the U.S. today (Friday, August 30). Visit the official site for more information.