Review: KICK-ASS 2 Sours Whatever Fun There Was The First Time 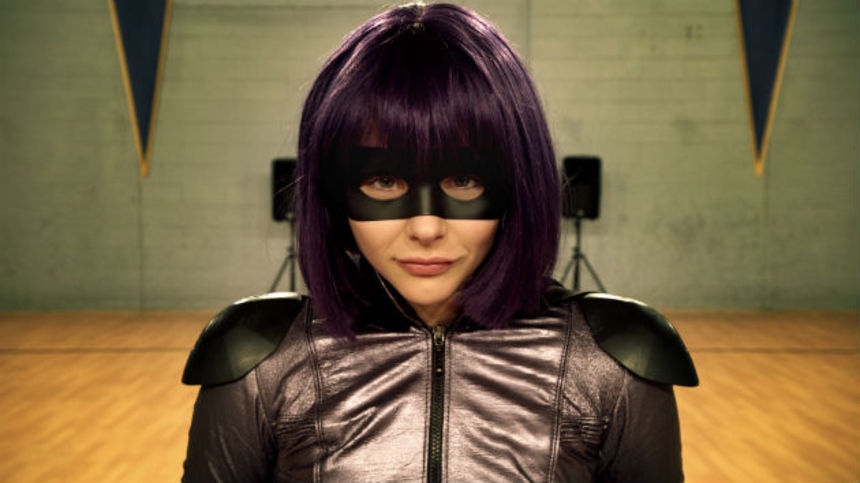 All the pieces were in place for a decent sequel -- so what happened? Why is Kick-Ass 2 a repellant, mostly unfunny, distasteful-and-not-in-a-good-way mess of mixed messages and tonal confusion?

Actually, it doesn't really matter why it's bad; what's relevant is that it is. Puzzling over how it came to be that way -- Mark Millar and John Romita Jr.'s comic book source material? Writer-director Jeff Wadlow's mishandling of it? The absence of scene-stealer Nicolas Cage? -- won't make it any better.

We pick up two years later, with Dave having retired from the dangerous hero biz but itching to get back in the game. Hit Girl never left it. Now living with her godfather, a conscientious police detective named Marcus (Morris Chestnut), Mindy secretly continues her vigilante work. She and Kick-Ass (despite the latter's disappearance from public view) have inspired legions of imitators, too, while Chris D'Amico, the erstwhile Red Mist, seeks to reinvent himself as a supervillain named The Motherf*****. (It seemed like he was going to do this immediately after the last film, not two years later, but whatever. Teenagers are easily distracted from their constant, burning obsessions.)

Dave seeks likeminded individuals to form a justice league of sorts, and naturally wants Hit Girl to be part of it. But Mindy has reluctantly agreed to obey Marcus' wishes that she hang up the latex suit and be a normal girl. She gets connected with a scrum of mean girls, led by blonde Brooke (Claudia Lee), to guide her through the daily life of a high-schooler, all the while pining to break some bones in the name of justice. 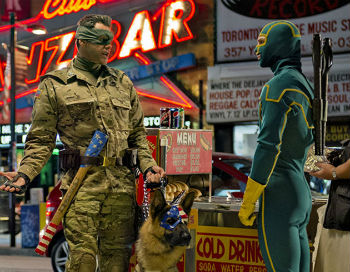 Soon Dave is collaborating with Colonel Stars and Stripes (Jim Carrey), a gruff ex-military patriot who's leading a team of self-appointed superheroes. One of them is Dave's best friend Marty (Clark Duke), who somehow didn't know until now that Dave is Kick-Ass. Another one, a lady avenger who calls herself Night Bitch (Lindy Booth), becomes Dave's new love interest. (Dave's previous girlfriend, played by Lyndsy Fonseca, dumps him over a stupid misunderstanding early in the film and is never mentioned again.)

The story is headed for a face-off between Kick-Ass' crew and The Motherf*****'s. But it isn't headed there very fast, or with much steam behind it. Instead, the major characters piddle around performing unimportant tasks and having unmotivated changes of attitude. Dave is a jerk to his concerned father (Garrett M. Brown) for no reason. Chris visits his imprisoned uncle, who does something nasty that helps Chris to decide to do what he'd already decided to do. (John Leguizamo is tangentially involved.) Mindy is betrayed by the mean girls, gets revenge with a magic machine that makes people poop and vomit, and accepts her true destiny as a killer of bad guys.

Along the way, the film frequently pauses to spout a message that contradicts whatever message was conveyed the last time it paused. Violence isn't the answer, except when it is, which is usually. You should be true to yourself by sneaking out to fight crime in a costume if that's your bag, but you should also follow your parents' wishes. Oh, and you don't need to wear a mask to be a hero.

More than once someone says "This is the real world, with real consequences," or words to that effect -- and at every turn, the real consequences of violence, revenge, and vigilantism are disregarded. If anyone involved here thinks that Kick-Ass 2 is actually an examination of real-world violence, then I'd be afraid to live in the same community as any of them. An ultra-violent escapist fantasy is fine, but don't insult us by claiming to be realistic.

The movie's idea of "real-world consequences" is that after The Motherf***** kills several police officers -- and then claims credit for it on Twitter -- the police go around arresting everyone in a costume except him, regardless of whether they're suspected of a crime. Somehow it becomes illegal, overnight, to wear or own a costume. Dave's dad protects him by telling the cops he's Kick-Ass, and they haul him off to jail for possession of a Kick-Ass costume that clearly doesn't fit him, and it's all just so stupid. 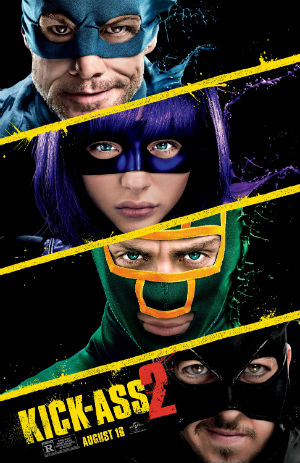 In the graphic novel, a female character is gang-raped by The Motherf***** and his goons. Don't worry, though! In the movie, it's been turned into a punchline! The Motherf***** intends to rape her, and has the goons hold her down while he unzips his pants, but then he can't get an erection and has to settle for just beating her up. Har! Dodged a bullet there, would-be rape victim!

In another scene, Chris says he wouldn't kill a dog because "I'm not THAT evil!" So rape, yes. Animal abuse, no. If the movie stated the conflicting views back-to-back, like I just did, it would be a darkly funny example of how twisted the guy is. But the movie doesn't do that. It just puts both ideas out there, separately, without comment. The implication is that the movie thinks it's OK to turn the threat of rape into a joke, but thinks killing a dog would be beyond the pale.

Where's the fun in any of this? And where's the structure? Dave feels like a supporting character in his own movie, while Mindy feels like the protagonist -- yet her arc is bafflingly weak, even illogical. Whatever transgressive thrills we felt when Mindy was a 12-year-old saying and doing horrific things are gone now that she's a teenager like everybody else.

The film has no idea what it wants to say, much less how to say it. There's still some potential in the premise of ordinary people trying to be superheroes, but not in the Kick-Ass franchise. We're done here.

The films opens in theaters across North America on Friday, August 16.