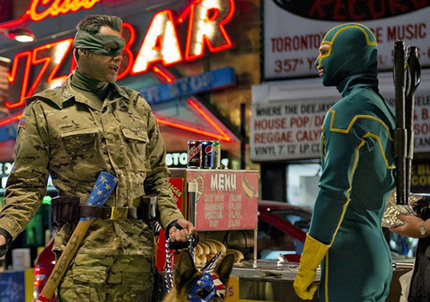 Of all the reasons I have been looking forward to seeing Kick-Ass 2, Jim Carrey has been the biggest. It's been a while since Carrey's been on his game but the man is a monstrous talent and this seemed like the perfect project to remind people of that, except ... well, except Carrey tweeted over the weekend that the Sandy Hook shootings have left him so uncomfortable with the level of violence in the film and that he cannot support it.

Says Carrey in two successive tweets: "I did Kickass a month b4 Sandy Hook and now in all good conscience I cannot support that level of violence ... my apologies to others involve with the film. I am not ashamed of it but recent events have caused a change in my heart."

Now, Carrey has been a long standing and vocal proponent of gun control laws so the anti-violence stance is in complete accordance with his already well known politics but it does come as something of a surprise that the conscience would kick in at this late date. It certainly surprised Kick-Ass creator Mark Millar who posted the following response on his official site:

First off, I love Jim Carrey. When producer Matthew Vaughn and director Jeff Wadlow called me up and suggested we do a conference call with him to talk about the sequel to the 2010 original I was genuinely excited. Like you, I love Eternal Sunshine, Man on the Moon and The Truman Show. Carrey is an actor like no other, an unpredictable force of nature who brings a layered warmth and humanity to his work as well as that unstoppable energy he's always been renowned for. He had lunch with Matthew around the time of the first movie and dug it so much he appeared that night on Conan O'Brien DRESSED as Kick-Ass, singing a duet with Conan dressed as Superman. Vaughn and I made a mental note to work with this guy as soon as possible as we're both huge admirers.

Cut to almost three years later and I'm sitting in a screening room in London watching what I think is one of Carrey's best-ever performances. I'd seen Kick-Ass 2 in many forms, but this was the absolute final cut complete with opening titles, music and a terrific post-credit sequence you're all going to love. I couldn't be happier with this picture. It's as good as the original and in many ways BIGGER as it expands upon the universe and really takes things to the next level. There are a lot of stand-outs in the sequel, every actor really firing on full cylinders and an amazing script that moves like a rocket. But Carrey in particular is magnificent. He's never done anything like this before and even from the trailer, with his masked dog sidekick specially trained to munch criminal balls, you can see that something really fun and special is happening here. Colonel Stars and Stripes is so charismatic and all his scenes are up there with Nic Cage's amazing turn as Big Daddy in the original... which made it all the more surprising when Jim announced tonight that the gun-violence in Kick-Ass 2 has made him withdraw his support from the picture.

As you may know, Jim is a passionate advocate of gun-control and I respect both his politics and his opinion, but I'm baffled by this sudden announcement as nothing seen in this picture wasn't in the screenplay eighteen months ago. Yes, the body-count is very high, but a movie called Kick-Ass 2 really has to do what it says on the tin. A sequel to the picture that gave us HIT-GIRL was always going to have some blood on the floor and this should have been no shock to a guy who enjoyed the first movie so much. My books are very hardcore, but the movies are adapted for a more mainstream audience and if you loved the tone of the first picture you're going to eat this up with a big, giant spoon. Like Jim, I'm horrified by real-life violence (even though I'm Scottish), but Kick-Ass 2 isn't a documentary. No actors were harmed in the making of this production! This is fiction and like Tarantino and Peckinpah, Scorcese and Eastwood, John Boorman, Oliver Stone and Chan-Wook Park, Kick-Ass avoids the usual bloodless body-count of most big summer pictures and focuses instead of the CONSEQUENCES of violence, whether it's the ramifications for friends and family or, as we saw in the first movie, Kick-Ass spending six months in hospital after his first street altercation. Ironically, Jim's character in Kick-Ass 2 is a Born-Again Christian and the big deal we made of the fact that he refuses to fire a gun is something he told us attracted him to the role in the first place.

Ultimately, this is his decision, but I've never quite bought the notion that violence in fiction leads to violence in real-life any more than Harry Potter casting a spell creates more Boy Wizards in real-life. Our job as storytellers is to entertain and our toolbox can't be sabotaged by curtailing the use of guns in an action-movie. Imagine a John Wayne picture where he wasn't packing or a Rocky movie where Stallone wasn't punching someone repeatedly in the face. Our audience is smart enough to know they're all pretending and we should instead just sit back and enjoy the serotonin release of seeing bad guys meeting bad ends as much as we enjoyed seeing the Death Star exploding. The action in Kick-Ass 2 is like nothing you've ever seen before. The humour, the characters, the heart and the set-pieces are all things we're very proud of and the only warning I'd really include is that it's almost TOO EXCITING. Kick-Ass 2 is fictional fun so let's focus our ire instead of the real-life violence going on in the world like the war in Afghanistan, the alarming tension in Syria right now and the fact that Superman just snapped a guy's fucking neck.

Jim, I love ya and I hope you reconsider for all the above points. You're amazing in this insanely fun picture and I'm very proud of what Jeff, Matthew and all the team have done here.

This is an odd course of events, to be sure, and one that leaves my own feelings rather conflicted as I share Carrey's politics as it concerns gun control and also share Millar's opinion on the links between screen violence and actual violence. What say you? Does this offer any sort of insight into an incredibly thorny issue?