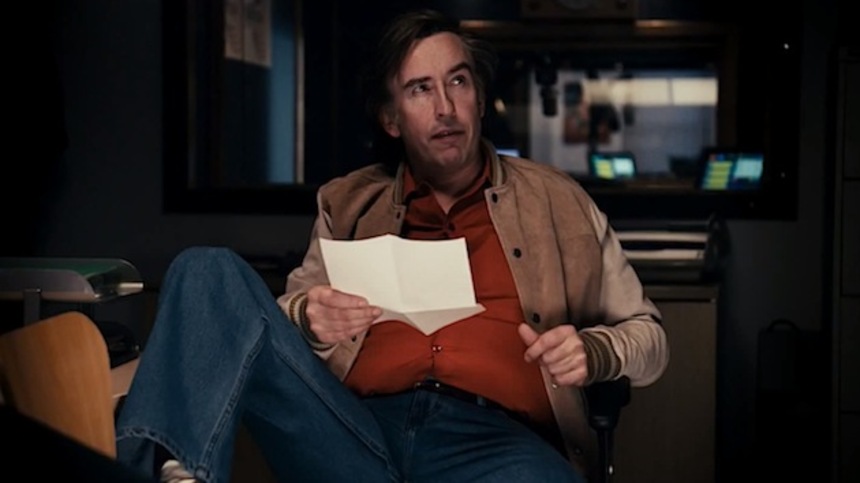 The highly anticipated big screen debut of Steve Coogan's Alan Partridge arrives in Alan Partridge: Alpha Papa, a blissfully straightforward and outrageously hilarious comedy that finds Partridge caught up in a hostage situation at the local radio station in Norfolk where he works.

When North Norfolk Digital is taken over by Gordale Media, changes to the staff and the direction of the station are inevitable. Partridge, though, makes a desperate attempt to save his job by throwing fellow DJ Pat Farrell (Colm Meaney) under the bus. Pat doesn't handle his dismissal well, returning to hold the station at gunpoint and unwilling to negotiate with anybody other than Alan.

At this point I should probably admit that my prior knowledge of this popular character is virtually non-existent and that this cinematic venture was barely even on my radar until its fantastic trailer began showing up everywhere. However, my lack of experience with Partridge does allow me to say with some vague sense of authority that this is a really accessible film that plays just as well for those who are fans of the character's television appearances as it does for those who are seeing him for the first time.

The best decision those involved in producing Alpha Papa make is to keep things small scale and resist the urge to manufacture high stakes drama or overly ridiculous comedy that certainly wouldn't have been able to stay true to Partridge's television roots. While he remains caught up in a very dangerous scenario, nothing is taken too seriously (every slightly serious moment is followed swiftly by a joke, in any case) and Alan's always concerned with the smaller details, wondering if this is what it's like to be in an action movie or trying to secure a better job opportunity while broadcasting from within the siege.

It's always evident that both the writers of the film and Coogan himself have a masterful understanding of what makes Alan Partridge tick. He's a very awkward character that's never so cringeworthy that it's painful and while he's always saying the absolute wrong thing, it's just so much fun to watch him navigate these situations. I'm well aware that many of Alpha Papa's references to past events are probably to things that have happened on his television shows, but there's something about the way they're talked about and how Coogan plays Partridge's reactions to them that immediately and impressively provides a very real feeling of the character's rich history.

Every line is delivered perfectly by this cast full of strong British talent and it's important to recognise that Pat is just as important to this narrative as Alan is. Pat is far from the villain, as it's easy to understand why someone would react with such anger to not only being fired but to feeling as though their personality is being erased by some uniform corporate identity. As it is in The World's End, the thematic heart of this story is all about people needing to retain their traits as individuals while the world works against their desires.

Restraint and a very assured approach to the character material serve as a great foundation from which Alan Partridge: Alpha Papa builds some truly terrific comedy. A few of the most quotable lines can already be heard in the trailer ("I Am Siege Face" being perhaps one of the best) but there are so many more where those come from and this is a film full of sharp dialogue, incredibly funny physical comedy and wonderfully delivered one-liners. It's all edited down from what was apparently two and a half hours' worth of script to be a streamlined and consistently entertaining 90 minutes of siege-based hilarity that'll leave everyone in the audience happy.

Do you feel this content is inappropriate or infringes upon your rights? Click here to report it, or see our DMCA policy.
alan partridgealpha papacolm meaneysteve coogan