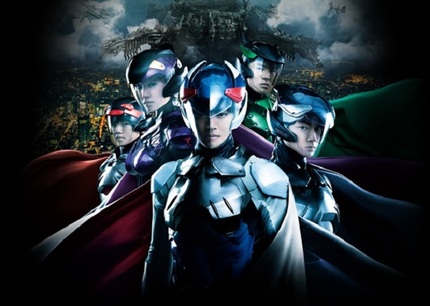 Gatchaman has an amazing opening. The team is quickly introduced, they get to show off their powers, and there's a city-wide fight that involves numerous costumed villains and a fast moving Ferris wheel sized bomb. The scope of the action is epic, events escalate with wild creative glee, and my low expectations blew away in the wind. If this is how they opened things up, what else did the filmmakers have up their sleeve?

I'm not familiar with Gatchaman beyond its Battle of the Planets visual iconography, but the screenwriter does a good job of throwing the viewer in the deep end with enough life preservers to keep one afloat. You have a team of people powered by glowing rocks that give them super powers. They work for an organization that's trying to stop a villainous race of evil some things (Galactors!) that are invading the planet. There ya go! That's not so hard! Not every superhero film needs to be an origin tale. Sometimes we just want to hit the ground running, and in that regard, Gatchaman does it right

It's a shame they forgot to make it exciting.

After the breathtaking opening, I got to watch characters talk. And talk. And talk. It was about betrayal,and lost friendships, and the general melodrama you'd expect from this material. The problem is that without any set-pieces, I never felt involved in what was going on. Nothing ever built up. At a few points, it looked like something exciting was going to happen, that things were going to be shaken up, but then the characters just delivered more exposition for 15 minutes standing in the middle of a big empty room.

The creativity of the opening never came back. Finally, the climax came along -- just a bunch of fist fights in a dark, cramped cavern location. Characters stopped and talked for five minutes in the middle of combat. There was no spark. It looked great and the special effects were solid, but it was all so lifeless. Every person, from the art director to the charming actors, were giving it their all, but there just wasn't anything that was going on.

Is it that hard to put together a blockbuster?

I'd like to think my expectations aren't impossible to meet. I don't expect the producers to spend 500 million dollars. All I want are fun characters, a sense of dramatic escalation and TO BE ENTERTAINED! If the film is about future technology ninjas, I expect them to, you know, be ninjas. I don't want to watch them talking about giving up if I've only seen them be ninja-like once.

Perhaps I'm not the audience for this film. Maybe all of the drama that went on was earth-shattering to people familiar with the material...

I don't think so.

It's crazy in this day and age that any person on any creative level would think that it is acceptable to have two action scenes in a blockbuster -- an opening and a climax. Where is the flow? Where is the sense of escalation?  I'm not bloodthirsty, but I do want my pulse to race. Comedies, dramas, and horror films all have specific ways of doing that. Why is it so hard for big-budget blockbusters to do the same?

The most frustrating part is that it's all there under the surface. They have a game director, a game fight choreographer, a game cast, and a robust budget. There's hints throughout of the fun film that could have been -- the one that wasn't crushed under the weight of nothingness and non-events. I have no problems with the material being taken seriously. I have a problem with it being dull.