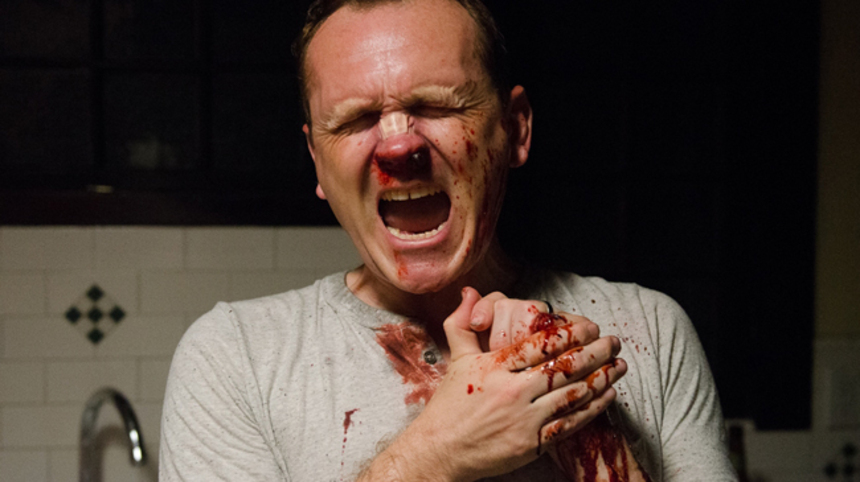 E.L. Katz's debut feature film Cheap Thrills is set to have its Canadian Premiere this Sunday, August 4th at 9:35pm in the Imperial Theatre, where the Fantasia audience will experience the cinematic equivalent of being hit about the head with a cast iron skillet! And what's this? The folks at Fantasia have bestowed the director with an award:

Montreal, 2 August 2013 - Each year, The Fantasia International Film Festival selects one special film from a first-time director that somehow stands leaps and bounds beyond its incredible kin - a stunning feature that showcases an exciting young talent who Fantasia's jury sees as a leader in genre cinema for years to come.
This year, our New Flesh Award for Best First Feature goes to a very special film that Fantasia is deeply honored to host the Canadian Premiere of on August 4th - E.L. Katz's CHEAP THRILLS!
Winner of South by Southwest 2013's Audience Award, the Fantasia jury calls CHEAP THRILLS, "Darkly humorous, smart and bloody in ways that will make many viewers squirm with glee. This abundantly confident first feature provides a thoroughly entertaining snapshot of modern blue collar desperation in a world addicted to easy money and childish amusement."

Our own Peter Martin caught the film at it's World Premiere at SXSW and had this to say in his review:

Class warfare comes perversely home in Cheap Thrills, a fiendish, fierce, and funny morality tale about the true value of money. It's absolutely convincing, even though it shouldn't be.
Cheap Thrills is not afraid to get its hands bloody, though what makes it work is a visceral understanding of the survival instinct, and of what it is that separates men from animals. And how much is that worth?

Congratulations to Katz and his team. They've made a hell of a bloody good movie.
Tweet Post Submit