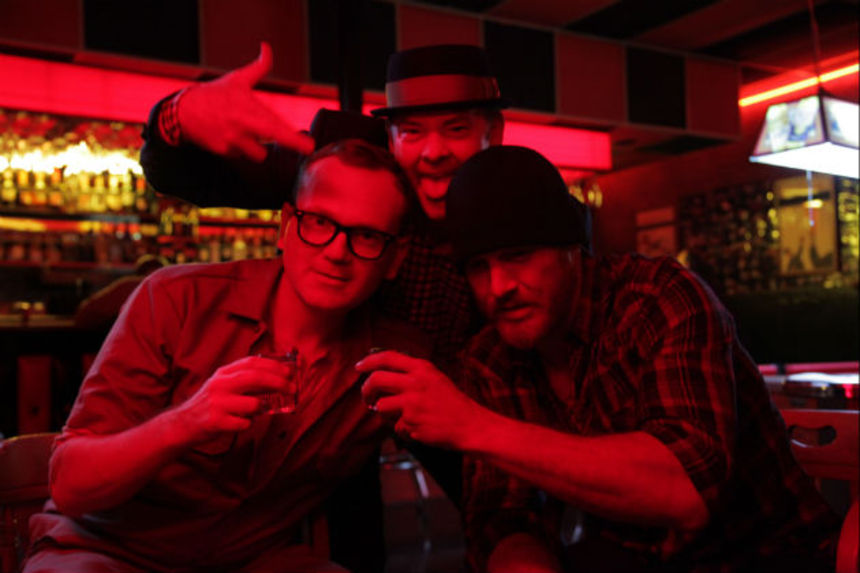 Class warfare comes perversely home in Cheap Thrills, a fiendish, fierce, and funny morality tale about the true value of money. It's absolutely convincing, even though it shouldn't be.

The film explores the tangled relationship between the idle rich and the working poor, giving fresh answers to age-old questions: How far are you willing to go to provide for your family? What is the dollar value of pride and/or humiliation? How do you assess your own personal worth? And how much money would you pay to get revenge on the neighbor's dog that keeps defecating in your backyard?

Craig (Pat Healy) is introduced as a loving family man, with a supportive wife (Amanda Fuller) and 15-month-old son. But they're facing eviction if Craig can't come up with a lot of money in a very short period of time, and the problem is greatly exacerbated when Craig is laid off from his job at an auto shop. Stopping for a drink on the way home, he runs into Vince (Ethan Embry), an old friend he hasn't seen for five years. Vince looks like a sleazy character, and sure enough, he's an ex-con and, currently, a debt collector.

Craig is ready to part ways with Vince when they make the acquaintance of the friendly Colin (David Koechner) and his bored wife Violet (Sara Paxton). Free-spending Colin has a wad of cash, and quickly moves from buying Craig and Vince drinks to offering money to the first one of them who can down a shot of tequila. From there the games are on, and the friendly little competition spins increasingly -- and irrationally -- out of control.

Healy captures the quiet desperation of a kind and gentle man who seizes on any opportunity to provide for his family with instinctive zeal; he taps into a reservoir of strength as his personal code of conduct is shredded, one jagged edge at a time. His character, Craig, is struggling to survive, and anyone who has faced an empty wallet with a mountain of bills and responsibilities knocking on the door will recognize the signs of despair in Craig's eyes. Craig is an immensely sympathetic character, which makes it all the more painful when the consequences of his actions are brought home. And yet Craig still elicits frequent laughter by his reactions to ridiculous situations.

Embry may be playing the less sympathetic Vince, but he nails the scuzzy side of Vince's personality, the perpetual self-justification that indicates self-examination is not a priority in the man's life. Vince is venal and infuriating and selfish and foolish, given to doing drugs with strangers, and manifesting a violent streak that is downright scary. Under the bluster, a thin layer of civilized empathy remains, but how long will it last?

As a wealthy couple with a twisted sense of entertainment, Koechner and Paxton are more symbolic than realistic, which plays into the outlandish game-playing that's involved. Their eyes tell the tale: Koechner's go blank and deadly and unknowable at certain points, while Paxton's acquire a chilling glee that lights up her entire face.

The script by Trent Haaga and David Chirchirillo expertly lays the groundwork in step by step fashion; later on, the paths become more predictable, but still succeed due to the expert performances and the skilled direction by E.L. Katz, making his feature directorial debut.

Cheap Thrills is not afraid to get its hands bloody, though what makes it work is a visceral understanding of the survival instinct, and of what it is that separates men from animals. And how much is that worth?

The film had its world premiere last night at SXSW. It screens again on Saturday, March 9, and Tuesday, March 12.

Do you feel this content is inappropriate or infringes upon your rights? Click here to report it, or see our DMCA policy.
David KoechnerE.L. KatzEthan EmbryPat HealySara Paxton