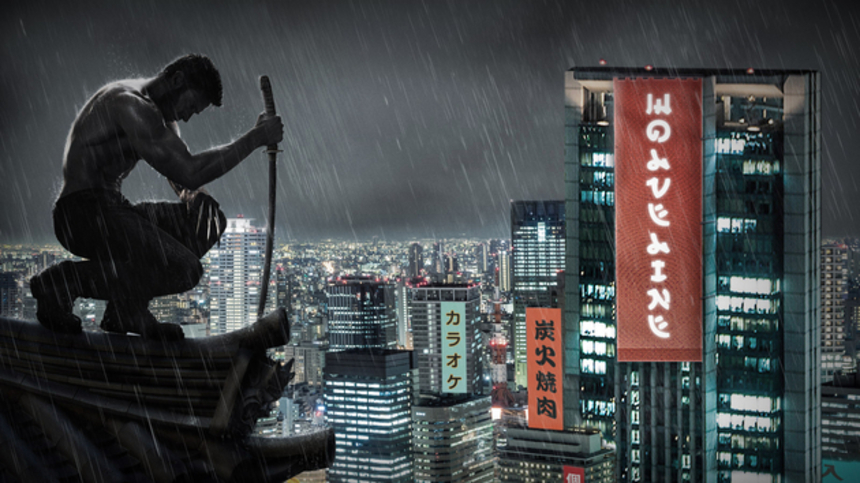 I can't speak for everyone, but after a summer full of crumbling cities, robots, monsters, and the loudest sound effects I can remember, I felt the need to brace myself as I sat down to another big-budget action spectacle. Thankfully, with a smaller budget, a script concerned with characters (or at least one) and a more atmospheric mise-en-scene, The Wolverine, while still a summer tentpole, is in many ways the antidote to the maelstrom of destruction that's occurred in the multiplexes this season. However, while loaded with good intentions, James Mangold's addition to the X-Men series is nevertheless the victim of a few too many compromises.

Second only to Iron Man in the Marvel-verse in terms of popularity, The Wolverine marks the titular character's sixth big-screen appearance and his second spinoff. Following the critical failure of X-Men Origins: Wolverine (2009), this installment's narrative is taken from a much-loved 1980s comic book arc created by Chris Claremont and Frank Miller. The action has moved to Japan, and, like any good spinoff should be, it's a self-contained episode.

Following the events of X-Men: The Last Stand (2006), the Wolverine has renounced his mantle as a hero and becomes a hermit in the mountains, doing his best to steer clear of society. His hiatus comes to an end when a young Japanese woman finds him and passes on a summons from an old acquaintance in Japan. He travels to Tokyo to visit a dying man who he once saved during a nuclear explosion in World War II. A web of intrigue surrounding the ailing mogul's inheritance develops and it's not long before the Wolverine is on the run, trying to save the old man's granddaughter from the clutches of the Yakuza.

Aiming for a pulpy Japan noir feel, Mangold's film features a number of strong episodic elements and admirable restraint as it seeks to focus on the Wolverine's inner crisis. Like any war veteran, he suffers from fitful sleep and terrible nightmares. In addition, a vision of Jean Grey, his deceased lover, haunts him. His immortality is a burden and he knows that anything he loves will die. Early in the film he is poisoned and becomes mortal, albeit still extremely strong. While this lends some much-needed urgency to his fights, it also accelerates his personal journey.

As we've come to expect from him, Hugh Jackman delivers the goods with another physical, gruff and empathetic performance as the adamantine mutant. He's also made a great effort in the gym, as the 44-year-old's chiseled abs featured in the film's promotional material seem to be the real deal. Throughout the franchise, Jackman has done the best he could with what he was given but The Wolverine offers him his meatiest role yet and he has no trouble balancing the character's tough exterior and inner existential anguish, always with a little room for some throwaway one-liners.

Unsurprisingly, the rest of the cast, which is mostly Japanese, is given much less to do. Rika Fukushima, as the red-haired kitana wielder Yukio, is spunky and fun, if just a little uncomfortable in English. The love interest, played by Tao Okamoto, is slightly mysterious but little more than a damsel in distress. The men in the film, including ace Japanese star Hiroyuki Sanada, have little trouble with their two-dimensional characters.

The only sore spot in the starring lineup is Svetlana Khodchenkova, who you may recognize as Tom Hardy's love interest in Tinker, Tailor, Solider, Spy (2011), as the villainous Viper. She's in stark contrast to the Asian cast's generally calm demeanors (which may well be the point) with a showy but off-base performance that would have been a better fit for for the more brash and cartoonish Origins or The Last Stand. I certainly don't mean to lay all the blame at Khodchenkova's feet as the character she is given, not to mention the ridiculous costumes and over-the-top hair and makeup she is subjected to, don't give her much wiggle room.

As an action film, The Wolverine is far less ambitious and relatively tame when set alongside this summer's bombastic fare. Nevertheless, one scene in particular, set on a bullet train, is easily among the most thrilling moments we've had on screen in 2013. The film's mid-section largely dispenses with action as we retreat to the countryside, fill out the backstories, witness a burgeoning romance and wade through the Wolverine's emotional baggage. The budget then shows its muscle again in the big climax but after a promising start, it devolves into a pastiche of action scenes from the last few years, replete with yet another big screen robot. By playing it safe, the film ends on a whimper, it feels anticlimactic and worse, just a tad lazy.

As a Japan-set, character-based and episodic narrative, The Wolverine is almost a success. However, it plays a little fast and loose with some Japanese genre codes (such as a cadre of monks suddenly turning into tattooed, bare-chested, gun-toting yakuzas) and suffers from not being shot in Japan (plans were scraped following 2011's tsunami). Jackman is on form, Mangold lends his solid if uninspired directing style and there's a great Kurosawa reference, but the film lacks the punch it needs. By aiming a little too high and not quite meeting its promise, The Wolverine is a slight disappointment.

Do you feel this content is inappropriate or infringes upon your rights? Click here to report it, or see our DMCA policy.
2013actionblockbustercomic bookhugh jackmanjames mangoldjapansummerthe wolverinex-men