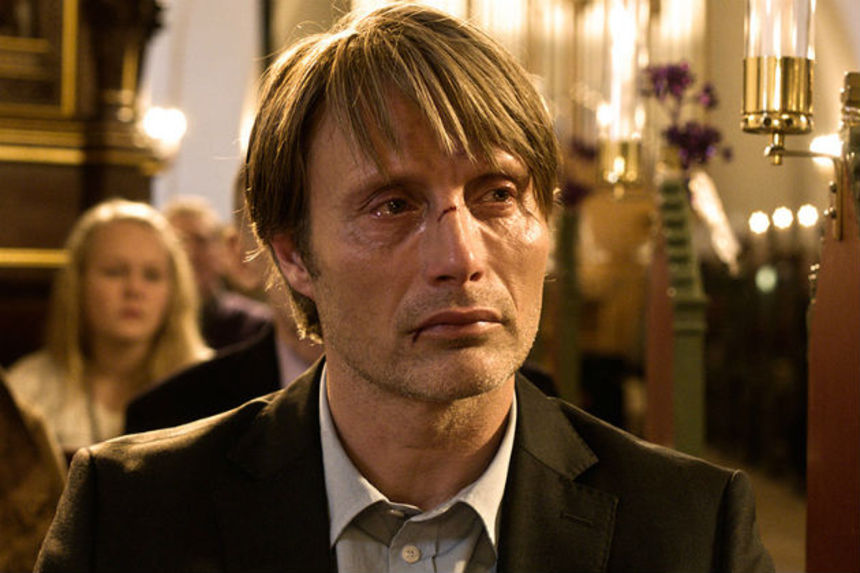 There is no arguing the craft on display in Thomas Vinterberg's small-town, big-drama showcase The Hunt.

Mads Mikkelsen turns in the performance of his career -- and if you look back on his career so far, that is an impressive feat -- as Lucas, a volunteer teacher at a kindergarten school who is accused (and later ritually abused) by his own friends and neighbors after one of his students, young Klara, in a fit of childish pique accuses him of 'pointing his willie' at her. The cinematography, all warm and woody prior to the accusation, turns all white and frigid when the milk is spilt. The supporting characters all play their parts to whip the audience into a conflicting bit of rage at how a) we hate pedophiles and b) how we hate to see others rush to judgement.

Sure, it feels OK when we do it.

When I see the Zentropa logo come up in front of a film, my knee-jerk reaction is that the film will be a provocation. After all, Lars von Trier is not only one of the co-founders of the company that deals in that sort of cinema, but he created the Dogme95 movement with Vinterberg as well. Their previous effort, Dear Wendy, springs to mind as something that is both hysterical and hysterically funny. The Hunt is not that, exactly; its satire is more sublimated: it aims to tickle a slightly more refined dramatic palette. But it is guilty of leading the witness, both literally in one particular interrogation in the film, and figuratively as it piles on a lot of emotional baggage instead of letting Mikkelsen's fab performance stand on its own.

Lucas is going through a chilly divorce with custody of his teenage son in the balance, but otherwise he is a 'head held high, feet on the ground' sort of guy in town and a central figure in the circle of men (who hunt) in the rural community. In particular, he and his best friend Theo, Kayla's father, have a long-standing relationship. It's based partly in male goofing off, but defined by its warmth and trust.

Lucas is tentatively dating the only non-local (English speaking) woman at the kindergarten school and he seems to have the most fun at the school with the kids. Hell, it's Christmas! If you've watched movies before, then you know where this is going. You will intuitively feel the beats of this story, even as Vinterberg does his best to keep the audience on its toes with weird indicators and ominously misleading bits of foreshadowing.

The curious thing about the picture is that, despite it being an act of empathy for Lucas, even if his only flaw is casual aloofness, it is equally a savage attack on all the women in town.The principal of the kindergarten (and her forever nodding sewing circle of volunteers) is at best incompetent, at worst dangerous; the soon to be ex-wife is absent, unless you count Lucas' dog angrily barking every time her name is spoken aloud; the new girlfriend is easily pushed away after she hesitates in her convictions towards defending Lucas, and then just as easily drifts back in later in the picture. Even worse is Theo's wife Agnes, who either plays the men against one another passive-aggressively or tries to avoid direct confrontation by running away.

If von Trier turns his women (Antichrist notwithstanding) into otherworldly martyrs, Vinterberg seems to be aiming for shrews. Once this pops out at you, it's hard to watch the film where the flawed but forgiving men do all the thinking and soul-searching, while the women yell 'FIRE' in the crowded theatre, and duck out by the service exit. Even Kayla, ably played by young Annika Wedderkopp, takes her leave for the middle bulk of the movie once she gets the ball rolling.

The Hunt postulates that decorum and discretion, once the ugly-cat is out of the bag, is a useless gesture; the only way to get things done is direct and to the point male rudeness. It suggests we let the men wrassle in the corner and then hug afterwards, because the women are not going to solve this thing (and even then, there is going to be lingering poison and scar tissue.) I cannot wait to read the inevitable Women's Studies PhD thesis on this movie. Zentropa does it again!

Review originally published in slightly different form during the Toronto International Film Festival in September 2012. The Hunt opens in limited theatrical release in the U.S. on July 12.

Do you feel this content is inappropriate or infringes upon your rights? Click here to report it, or see our DMCA policy.
Lars Von TrierMads MikkelsenThomas VinterbergZentropa