Review: THE INTERNSHIP Doesn't Make You Search For Product Placement 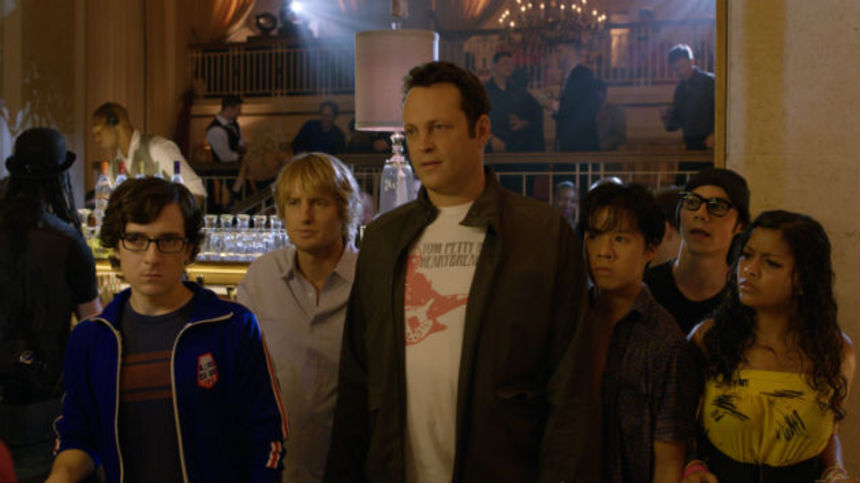 Finally! The movie that marketers have been waiting for has arrived: The Internship is an affable comedy that wears its product placement proudly on its sleeve.

Vince Vaughn, the son of a salesman, is credited with the story and shares a screenplay credit with Jared Stern, which probably accounts for one of the more favorable portrayals of salespeople in recent cinematic history. Vaughn reteams with Owen Wilson, his running buddy in 2005's Wedding Crashers; they play Billy and Nick, respectively, luxury watch salesmen who lose their jobs when their boss (John Goodman) unexpectedly closes the business. Both are assumbed to be good salesmen, but neither has made much of themselves, according to Billy's girlfriend and Nick's sister.

Their fellow interns fall neatly into creaky stereotypical categories, all variations on the 'young computer nerd' cliches of attitude and behavior. Never fear: they will learn how to be better, more rounded human beings, thanks to our salesmen / heroes and a friendly stripper or two. One day, they might even kiss a girl! 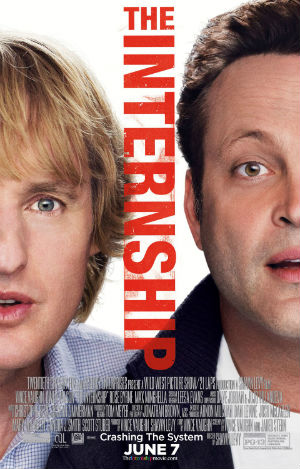 Speaking of lip service, the film offers a glimmer of hope that it might address real-life issues by referencing the job crisis faced by technology-challenged middle-aged people, and then later acknowledging the often bleak prospects even for the brightest and most ambitious college graduates in today's job market. (This is not an unreasonable hope, since Vaughn had a hand in writing The Break-Up, which tapped into the reservoir of resentment and anger that can build up in otherwise loving relationships.) Instead, Billy and Nick preach the old-fashioned virtues of teamwork and positive thinking. The Internship insists that the path to happiness can only be found by aligning one's life goals with those of a giant corporation willing to offer secure employment.

Left unsaid is the possibility of striking out on one's own. One of the salesmen turned entry-level computer nerd -- either Billy or Nick, I can't recall, but their platitude-filled manner of speaking is interchangeable -- briefly expresses regret over not striking out on his own. But that thought is swept away at the giddy possibility of working for such a cool company with such a great future! (Which, of course, was started by entrepreneurs who worked out of someone's garage, but never mind that.) And only one team of interns can "win" the summer-long series of pressure tests and be guaranteed a job, which ups the ante considerably.

That brings us back around to whether The Internship should be considered as a movie or as a thinly-disguised advertorial for the Big Search Engine Company. As a movie, The Internship scoots quickly into familiar territory and resists any temptation to break the mold of inspirational, underdog comedies. It bears more than a whiff of Old School (the older teaching the younger while having a party-hearty good time) and Wedding Crashers, the latter resemblance coming more clearly into focus as Nick quickly begins flirting with a middle manager (Rose Byrne). Hmm, wonder where that relationship is going?

Familiarity doesn't always breed contempt, and the genial warmth of the characters and the near-total absence of unpleasant people -- save for the unbridled and over-the-top evil manifested by a gleefully mean and highly-competitive fellow intern (Max Minghella) -- ensures that the constant rain of comedy bits will ocasionally hit their targets. Vaughn and Wilson make for a good comedy team, Byrne underplays her role nicely, Asasif Mandvi brings a welcome touch of ambiguity as the intern overlord, and Max Minghella is vigorous as the sole antagonist.

Shawn Levy provides his usual level of competence as a director of populist fare (Real Steel, Date Night, Night at the Museum), but nothing more. He's never met a reaction shot he doesn't love, which means the audience is constantly reminded how they're expected to respond.

As an advertorial, The Internship is obnoxious. The company doth promote itself too much, methinks, as a life-changing place to work, filled with good-hearted people who are willing to give of themselves without thought to financial recompense. Not only is the film set at the company's headquarters, its logo is displayed almost continually, and the screen is assailed by product placement in nearly every corner, to a ridiculous degree. The novelty of such a bald-faced, feature-length advertisement quickly wears off; it felt to me as though I had made the mistake of signing up for a "free" weekend getaway, only to be assaulted by sales pitches for two hours.

Like any commercial, The Internship seeks to win over its audience by sheer repetition, cushioning its promotional message in a comfortable, well-worn coat made out of recycled materials. Frankly, it made me want to search for a new search engine.

The Internship opens wide in theatres across North America on Friday, June 7. Check local listings for locations and showtimes.