Review: BREAKUP AT A WEDDING Succeeds On Its Modest Comic Charms 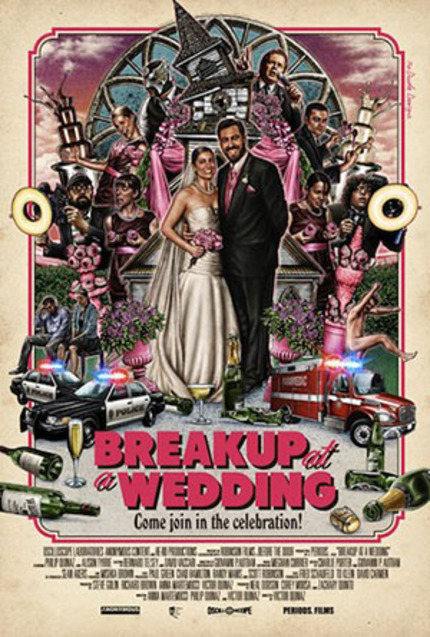 High concept comedies are often a tough nut to crack; by avoiding full-on broad laughs, the shifts in tone have to be deftly carried out in order to sustain interest. I was pleased enough with Breakup At A Wedding, pleased with its ambition, its execution, even its stylistic conceit. Not exactly high praise, perhaps, but I think the film achieves what it sets out to do, and does so admirably.

I grant this kind of is like complimenting a bride on her wedding day for her frugality, but it's a funny little film to try and pin down. Ostensibly a movie-within-a-movie, we see the wedding video from hell, brought about when the bride gets cold feet but decides to carry out the wedding anyway, simply without signing the wedding certificate. I've been to too many Jewish weddings, I guess, where the signing of that certificate is done in full view of the family, or even sometimes in front of the congregation - what can I say, we're a people who like contract law.

Still, it's a cute way of approaching the mock-doc format. Thing go awry, people get drunk, too much money is spent, all while the cameras roll. The voice-over by the director-within-the-film reminds us of the magic of radio mics, allowing even moments of great intimacy to be captured for our viewing pleasure.

When the film works, it's actually quite charming. I particularly liked the scene of the obnoxious kid dancing like a lunatic while the camera faces a closed bathroom door, the conversation within being broadcast without the knowledge of the brat. All he sees is that there's a camera pointed in his direction, so it's time to be "on", to gesticulate wildly and draw attention.

This, of course, is a bigger metaphor for the whole notion of the big wedding, the ostentation and insanity (and often inanity) surrounding the whole shebang. For this one, we've got three separate types of chocolate fountains that dwarf the meat carving station where, by the order of the bride, the lights are to be red instead of white, because her father likes the look of meat under red lights.

In order for such a tale to work, you still have to find something to like about our central characters, rather than just praying for them to call the whole thing off already. The script does a decent job with this balancing act, but at moments I was kind of hoping something truly tragic would befall these people so they'd have something more interesting to stress about.

The camaraderie of the cast is quite, um, "engaging", and it's clear that the film's done as a kind of passion project. Producer Zachary Quinto brings a bit of Hollywood luster to the proceedings, at least in terms of a marketing push, but it's clear from the first frame that this is an indie project. Frankly, it'd likely be absolutely atrocious if it tried for the middle-of-the-road banality of a slick Hollywood production, so the film certainly benefits from its more meagre scope.

For the most part, the performances are strong and believable, from the manic bride through to the stumbling groom. Some of the broader characters, such as the Brit boss who must be hit up for a promotion, seem even more clichéd when set against what otherwise holds a great deal of verisimilitude.

Sure, the film's unlikely to leave audiences rapturous, but it is clever enough, charming enough and, frankly, short enough -- the first round of credits roll at the 77 minute mark -- to be worth your while. When it works, it's great, when it feels a bit draggy and misguided, it soon finds its footing. Hardly epiphanous, Breakup at a Wedding nonetheless provides a quirky yet accessible take on both the bridezilla and mock-doc subgenres.
Breakup at a Wedding is available via various Video On Demand platforms as of Tuesday, June 18. For more information, visit the official site.

Breakup at a Wedding