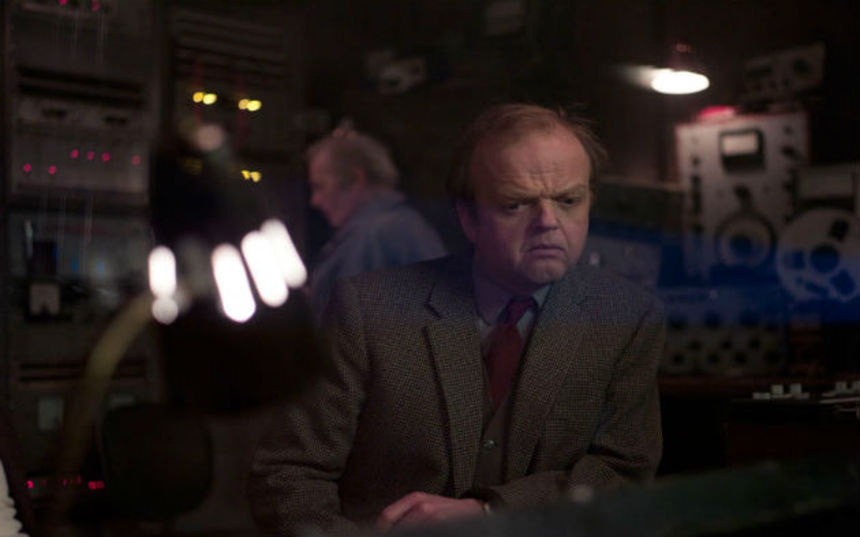 A timid, unsure man named Gilderoy (Toby Jones) has just flown from London to Italy. He shuffles through the corridors of a nearly abandoned building.

He is greeted coldly by a detached but beautiful secretary, Elena (Tonia Sotiropoulou), who directs him to a sound studio, it seems the 'silenzio' light never stops flashing above it as the film progresses. He is greeted by his new employer, the sleazy producer Francesco (Cosimo Fusco), and after a few days begins to unravel due to work pressures and strange occurrences, which lead to even more puzzling developments and horrific scenarios that question the reality of the film's premise entirely.

I approach discussing Berberian Sound Studio with total caution, as I am not entirely sure what I experienced. The plot itself is very self-contained and bare boned, even repetitious, as the monotony of Gilderoy's unspectacular job comes into focus. Where this film succeeds is its depiction of this working world within a fictitious structure of a feature film.

That is to say, the elements of a production environment are obsessively scrutinized and the sound mixing, editing, creating and recording are twisted to a maddening level; the sound of Giallo echoes, reverberates and mixes all throughout Berberian Sound Studio, and the screams and foul sound effects create an extremely uneasy tension and horror that only the mind can imagine. It is a relief the audio is given such undue attention, given the film's title, and in fact it is difficult to think of a film in recent years that has used audio so effectively.

The visuals in the film are an entirely different matter.

The claustrophic nature of the studio itself is a horrific element that plays on Gilderoy's anxieties and feelings of entrapment and oppression. The other voice actresses in the film, Claudia (Eugenia Caruso) and Elisa (Chiara D'Anna), are also verbally and potentially otherwise abused by the director and producer, forced into an even smaller booth and screaming into the microphones until their throats hurt.

The use of space here is palpable and reflects the various power plays occurring in this dubious production. Most people are kept out of the loop about what is happening, including Gilderoy, who is told to keep quiet and work, even when he enquires about his compensation due. 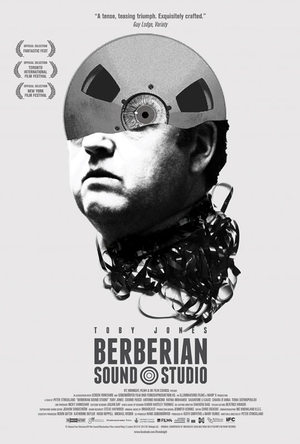 When not in the studio there is a space that I hesitate to call a complete abode that Gilderoy resides in, where he still works on his recording device and receives and perhaps writes letters to his mother, or himself. The framed nature and unnatural lighting in his 'house' suggests its artificial nature. Later, he is in the external environment, pitch-black, and when there is some light it's suggested that this location is equally as artificial.

Further on the visuals, director Peter Strickland employs a manner of unsettling effects, burning the image, returning to the same scene over and over, focusing on seemingly innocent items but with disturbing inclinations and a whole slew of other unsettling and amazing effects, particularly when transitioning to the next scene. Most of these bleed into the next shot effortlessly, further questioning the reality of the situation. To reiterate, these visual flourishes are handled deftly and serve as highlights of the film.

I have only touched on the greatness that is Berberian Sound Studio; the performances are haunting and stilted with enigmatic and odd characters who could happily exist in the David Lynch universe, as well as some truly unique ones, in particular the unseen sinister gloved hand that manically controls the projection of each scene.
Each character adds to the deepening mystery and depth of insanity that Gilderoy finds himself in.

What is really going on is of course subject to extreme speculation, but like the masters before him, Strickland leaves this open to wild interpretation. See Berberian Sound Studio immediately; I have not been this excited for a mind-bending puzzle film of this ilk since Mulholland Drive, an absolutely dark treat for the unchallenged mind and a terrifying technical achievement.