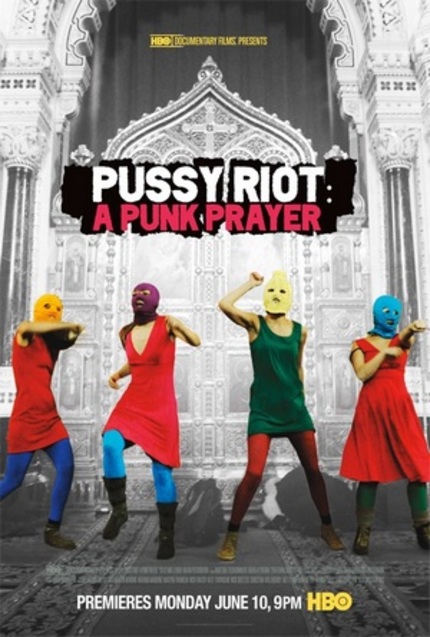 On February 21st, 2012, a group of four women, clad in brightly-colored dresses and similarly brightly-colored balaclavas, took to the altar of Christ the Savior Cathedral in Moscow and attempted to perform a protest song challenging the collusion between church and state. They were quickly arrested and thrown in jail, but not before becoming a cause célèbre for anti-Putin/anti-establishment groups around the world.
Pussy Riot: A Punk Prayer is a rare beast, a documentary about a seminal event that has the advantage of ridiculous amounts of "archival" footage from which to draw. This makes the film not only more comprehensive in its treatment of the material, but also blurs the line between the filmmakers and their subjects, leading the film to feel more like a tract than an objective piece. I know that objectivity isn't always the goal of a documentary, but it seems this time the barrier between the observers and the observed is dangerously thin.

More a documentary about the three women arrested in the incident than the incident itself, the film puts a human face on this injustice that has taken place so far from our doorsteps. Nadia, Katia, and Masha are not monsters, they are not violent terrorists, hell, they aren't even really "punks" in the way most people would observe them. What they are is something greater than all those things, they are symbols, they are the martyrs that their protest against the Putin regime needed. Despite wanting and seeking out the attention they received, the women seem genuinely shocked at the outcome. Nadia, Katia, and Masha received a sentence of two years in a penal colony for their actions.

Pussy Riot: A Punk Prayer is not a flashy documentary, in fact, it was no surprise to me that this was an HBO Films product because it feels very televisual. Lots of archival footage, lots of talking heads, and very little flair, though I suppose I can respect that as an aesthetic decision on its own. The footage tells the story, and because it is a contemporary one, there are always new developments as the film moves along. Though it does feel manipulative at times, it also makes for a dramatic narrative that works extremely well.
For those seeking to be outraged, Pussy Riot: A Punk Prayer can certainly provide you with plenty at which to direct your emotions. Because of the contemporaneous nature of the film, these women aren't allowed the freedom to explain their actions, so it is left to their friends and families to try and tell their stories. I can only imagine that a follow-up two years down the road is inevitable, since this is the story of women who cannot tell their own tales.
They are brave, they are brash, and it would appear that these women got the attention they needed, but did they really achieve anything? That's always the problem with protest movements, they take time. A Punk Prayer documents what might prove to be a watershed moment in a movement that could change Russia. Alternatively, it could document a flash in the pan that ends up being little more than shouting into a wall. Only time will tell, but if you want to know the story, this is a great way to catch up.