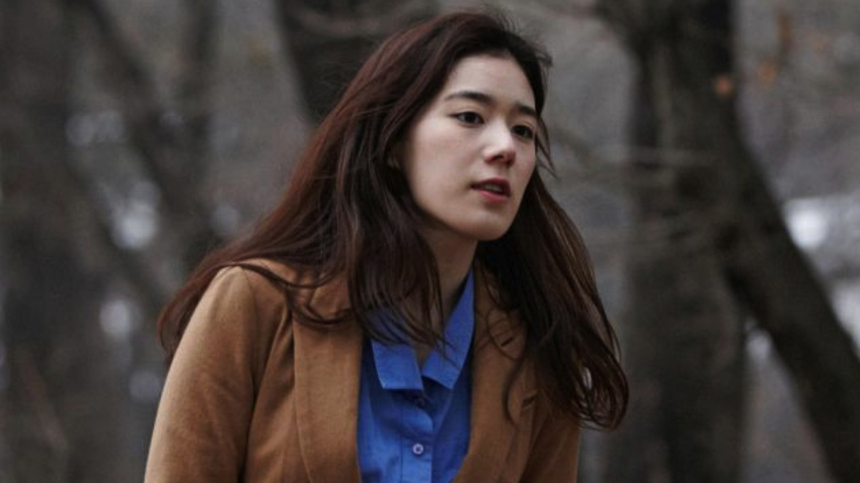 I've got a confession to make: Until last night I'd never seen a film by Korean auteur Hong Sang-soo (In Another Country, Woman Is The Future Of Man). So Why was that? My reasons in the past were fleeting, entirely vague, based around some misplaced notion that he was a director of some particular "heaviness" (which I really have no issue with). Perhaps that makes me lose a little street cred here at ScreenAnarchy, but I'd like to think I'm earning it back with this review and the fact that I am now most undoubtedly, and quite effortlessly a fan of his. In a word Nobody's Daughter Haewon is delightful. Only there's one hell of a caveat to that, which ultimately makes it the hopelessly endearing and honest piece of cinema that it is.

We follow on again/off-again student Haewon (Jung Eun-chae) through a rainy March and April. In what could only be described as a spirited prologue to contrast the rest of the film, Haewon encounters actress Jane Birkin on a street corner. In moments the two are chatting in English, laughing, absolutely delighted by each other. We learn that Haewon is an actress as well, and before Birkin walks off into the drizzly day, the two have hugged with such glee that it can't not be funny and almost a little absurd. Compare the playfulness of that encounter to Haewon's morning with her estranged mother, who is soon to emigrate to Canada, and the previous scene becomes all the more real and heartening. Mother and daughter endlessly dish out pleasantries to each other, which at first feel strained, coming from a place of tradition and politeness. Her mother tells Haewon that she is pretty. Haewon in return tells her mother it's only because she is so pretty. The two women laugh, chit-chat over books and coffee; the mother even tries to flirt with a young man for Haewon. Both women are shielding themselves, and yet by the final moments of Haewon's last visit with her mother there is a sense that parent and child have reconnected on some level, which devastates the wayward student even more so.

Hong's narrative structure feels loose and light, but by the end of its running time Nobody's Daughter Haewon reveals a rather genius construct of repetition and ellipses that shows just how stuck, how aimless our heroine is. The stark and simple naturalism is accented by a dreamy and existential quality which hangs over every frame like the lousy weather of the season. Despite this, the film's sweetness, and indeed at times utter silliness, is never lost to bouts of complete depression. This gently playful and philosophical touch makes Hong feel like a less forthright and manic cousin to Woody Allen or Noah Baumbach, and in some fanciful way, related to Jacques Rivette and that Frenchman's penchant for strong-willed heroines who straddle the line between bourgeoisie and bohemian. Haewon's encounters and happenings are largely shot in masters with pin-point zooms in and back out to accent an awkward or gentle moment between characters. Most of these are interludes from, or interruptions made by Lee, (Lee Sun-kyun) a filmmaker and a former professor and lover of Haewon's. Neither are quite over the other and the core of the film centers on the unraveling of their feelings for each other.

Indeed, much of the film's charm lies in the performance of Jung Eun-chae. A beauty and muse for any era of cinema, Jung's portrayal of Haewon is nothing short of a quiet breakthrough. Curious, giving and gracious, naive to a fault and wise beyond her years, Jung, despite being our narrator keeps Haewon something of a mystery to us. At times she is a blank canvass and a glaring reflection; bright and whimsical; proud and then quiet, nearly embarrassed by how infatuated everyone seems to be with her. She sternly, but playfully describes herself to Lee as the devil. When she excuses herself to the bathroom, her peers tell Lee that she comes from a rich family and that means trouble; that she is hard-headed. They are simultaneously showing their hate for her and protecting her from the married and older professor. In one of the film's most whimsical scenes, a Korean professor, who teaches in San Diego, tells Haewon that she is a good person; the kind of person that he would like to marry, because she will always keep him guessing, always keep him curious, which is healthy. He then hails a taxi for her with the power of mind control. Every impression we get of Haewon brings the enigma that she is into sharper focus. If anything this makes us feel more attached to her as she struggles to some kind of end with Lee, to some kind of freedom from this melancholic season.

In one way Nobody's Daughter Haewon is a fascinating reflection of the male psyche's idealization of the woman filtered through absolutely cinematic romanticism: which I fined to be the ultimate and also most dangerous kind of romanticism, for it can threaten to bring down a female character to an utterly one-dimensional status, leaving her a mere construct and notion rather than a person. Hong walks this fine line to deconstruct such notions, essentially battling his own demons of idealizing women, creating on the the periphery of this lost young woman, a group of smitten young and old men alike. By this turn he shows that women are likely the stronger sex, or else, well, both sides sure have little clue as to what's going on, and just allude to it quite differently.

Such a meditated and considerate look into that level of humanity and acceptance of, indeed, such strangeness is what makes Nobody's Daughter Haewon such a winning work, and makes me eager to explore Hong's back catalog of films as soon as possible.

Do you feel this content is inappropriate or infringes upon your rights? Click here to report it, or see our DMCA policy.
hong sang-sooJacques Rivettejung eun-chaekorean filmLA Film FestLAFFNoah BaumbachWoody Allen