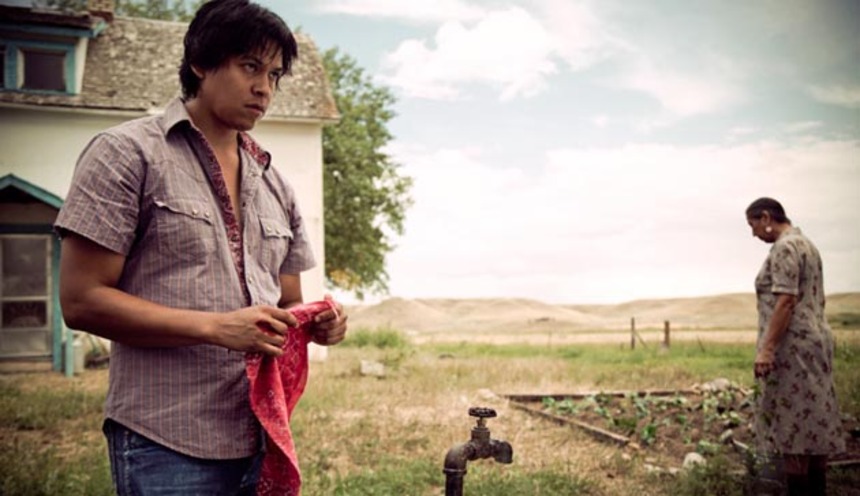 Winter in the Blood focuses on a young, alcoholic Blackfoot Indian somewhere in central Montana as he struggles to maintain his sanity while constantly reliving traumatic events from his past. While Chaske Spencer plays the part with an intense and distant inexpressive stare that seems appropriate for his character's implied PTSD, the real star of the show here is the vast, sun-kissed landscape of Montana. The background stretches out to fill the edges of every scene and shifts in the weather are big plot events. As characters ride horses through scrub brush fields and wrangle cattle in the rain, you get the feeling that the filmmakers (twin brothers Andrew and Alex Smith, directors of The Slaughter Rule) set out to celebrate this landscape, but the storyline they've chosen (an adaptation of James Welch's 1974 novel of the same name) is so dark and claustrophobic that the Big Sky country's openness seems at times a taunting front. This is a western after the fact, a story about what happens when the frontier has no future.

The cast is made up of primarily Native American actors. Some such as Gary Farmer (as the lazy, alcoholic stepfather-type) and Richard Ray Whitman (as the wizened sage) do a great job of giving life to what could have been stock characters. Others get by okay because their awkwardness gives a feeling of authenticity onscreen. We see the world through the eyes of the unnamed protagonist who spends the film either a) waking up confused and sweating through his tight briefs, b) drifting into flashbacks of his childhood with his brother Moses or of his estranged wife, or c) slamming booze, wine and beer. Occasionally he will also work a bit on the farm or walk miles into town to slam said beer. Despite the open landscape, the world the characters inhabit feels very small. Nostalgia permeates everywhere, and the longing for the old west feels deadly. The editing relies heavily on slow dissolves and the story moves slowly, barely fitting in between long, bluesy montages of Spencer's character dancing with his phantom wife or remembering his tragic father. The movie begins with an exchange that is repeated throughout the film: "Where are we going daddy?" "Guess we'll know when we been there". It turns out it's not very far after all.

Winter in the Blood takes a lighthearted tone towards the sadness of its beaten down and broke antihero for most of the film. There is a strange, funny little action sequence involving David Morse as a goofy white guy smuggling something into Canada that comes across as a recurring hallucination played for laughs. But this is no comedy. The darkness of the leading man and the underlying tragedy of his lot in life are fully explored. There are moments of brutality and allusions to the genocidal history of the American West that turn the movie from character study to metaphor. "What kind of Indian are you?" asks a woman with whom our man has a brief and violent affair. "Normal, same as always" he responds. His father's name is First Race and his brother is Moses -- this is hardly an accident. The film taps into the mythology of the Plains Indian to subvert the generic Western. This Indian's a cowboy who'd rather hide than conquer. He spends the whole movie looking for his broken gun. The mind's frontier may be more dangerous than the range, but at least he has tradition (the 'chock cherries' he provides for the elders to smoke out of long pipes) to bring a sense of peace.

Between the nostalgia and the tragedy, you'd be forgiven for feeling a little stifled. Welch's novel came out in 1974. This film, for all intents and purposes, could have come out in 1974 as well. It uses that era's sweeping aesthetic and tragic, freedom-seeking characters to create an experience that feels old -- and not in an entirely pleasant way either. I found myself asking throughout the film, "But what about now? Has anything changed?" Perhaps in Montana things haven't changed that much. But the themes of our stories have changed slightly and these days there's something about the source material that seems to portray tribal misery in a romantic manner that's slightly uncomfortable. The film version does little to update the story and as a result, some of its vitality is sacrificed. There's something very Montana about this project -- kind of backwards and a little old fashioned. It works in that odd paradoxical way that it doesn't.

It seems the Smith brothers set out to make a very specific type of western -- one in which nearly all of the thrills of the traditional western are either withheld or turn out to be fantasies. What's left is a portrait of a forgotten individual on a lonesome landscape. Not completely pleasant and not totally real, Winter in the Blood isn't the kind of movie with much of a shot at getting a major theatrical release. But true aficianados will want to track this down. There simply aren't many true Westerns out there these days -- and while it may be a little inverted, this is nothing if not a true Western.

Winter in the Blood