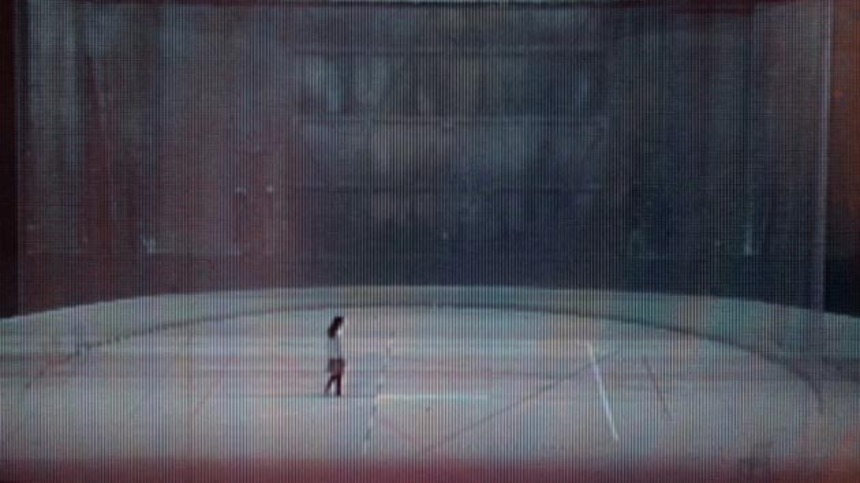 It may be hard for a movie like Rain to get noticed. Many documentaries employ the TV formula of souped-up editing techniques (jerky pan of a photograph! brightness filters!), loud rock snippets and old heads reminiscing in order to keep the viewer from nodding off. Rain leaves the decision to you. Taking the preparation and rehearsal leading up to a contemporary ballet performance for its subject, Rain doesn't take up the quixotic task of trying to convince you of the beauty or relevance of high art. Instead, directing/cinematography/editing duo Olivia Rochette and Gerard Jan-Claes have used the ballet rehearsals as a skeleton for their own creative endeavor. Although Rain is about a dance performance, the actual experience of watching the movie is that of gradually becoming acquainted with a place (The Ballet de l'opera National de Paris) and the rhythm of the creative process.

Similar to Frederick Wiseman's recent La Danse in that it is shot in a verité style and eschews narration for the voices of the dancers and administrators themselves, Rain differs in its feeling from Wiseman's film. The shots are selected more on the criteria of their visual beauty and compositional tension than for any informative purpose. There are more surveillance-cam shots of empty hallways, gorgeously lit doorknobs, and extreme close ups of people's faces and blistered, knobby feet than there are of the dancers doing their routines. Quiet mistakes are featured more than grand finishes. Sound dry? It's surprisingly moist. The elliptical editing gives many sequences a kind of mysterious weight with a tension here you might find in a Michael Haneke film before the violence erupts. But here it serves to keep you interested in the shots themselves rather than in the service of a message. As the scenes unfold (especially during the tracking shots in which the camera follows someone winding their way down elegant hallways), you begin to feel as though you were watching a minimalist European narrative film more than a documentary. The dancers and teachers never look at the camera, but they are 'acting' with their bodies and the result is a dramatic tension that has nothing to do with plot. Rain does a remarkable job of giving the sense of what's unique about dance -- the rhythms and tensions of bodies and minds in motion.

What's probably most interesting about this project is the way it puts the creative capital generated by expensive large-scale performances (like a ballet) to good use. The dance requires graceful coordination between the dancers, and the film reveals that this coordination goes much deeper. Dropped phone calls and answering machine messages on the soundtrack show that the fact the dance is performed at all is the real accomplishment. Organizing Rain so that we see the mirrored rehearsal halls and the pixelated video of previous performances (which the dancers watch and critique the same way sports players do), Rochette and Jan-Claes are able to efficiently kill two birds with one pirouette (pardon me). While only a select few are able to see the finished dance (dates the show ran), the much longer process of putting art into practice is here available for anyone to experience. It's a testament to the Ballet de l'Opera National that they were encouraged and sponsored filmmakers sensitive enough to create a behind-the-scenes movie that could never be a DVD extra and is in many ways more ambitious than the scenes it's supposed to be behind. No strong narrative emerges, but rhythm and movement have always been more important to ballet than story has anyway. And in Rain's cinematic ballet, the dancing is no more important than light catching the dust in a rehearsal studio or the strange appearance of a horse in the foyer.

The music choreographer Anne Teresa De Keersmaeker uses for the ballet (and which, in turn provides the soundtrack to the film) was composed by American minimalist sage Steve Reich. Reich is considerably less famous than his contemporary Philip Glass, whose layered music has been used to create atmospheric tension for documentaries like The Thin Blue Line and Koyanisqaatsi, but he has created some of the best music of the last thirty years. Reich is shown only once, briefly, but his music swirls in fragments and repetitions throughout the film and does much to keep it from drifting into pointless reverie. Swelling layers of harmonious tones filter in constantly from other rooms as the performers rehearse and security guards sit idly on stools and space off. Where narration or explication might be in another more conventional doc, we get elegiac snippets of piano or pulsing throbs. When we finally get to the climactic performance, Rochette and Jan-Claes opt to stitch together a series of tight close-ups rather than presenting the dance as an audience might see it. But they allow Reich's piece to play through, and the music becomes a large part of the film's climax. In this way the film is nearly as much about Steve Reich as it is the dancers, and although he stays out of the limelight, it is a fitting tribute.

But you don't have to go that deep. What's cool about Rain is that the film isn't desperate for your attention. As De Keersmaeker says over the phone to some anonymous inquisitor halfway through the movie "The most important thing is that it's called Rain and it's about dance". Need something more? "It's important politically--" she says, "it's contemporary dance and it's there." You might as well enjoy it.

Do you feel this content is inappropriate or infringes upon your rights? Click here to report it, or see our DMCA policy.
BalletDanceDocumentariesla film festla film festival