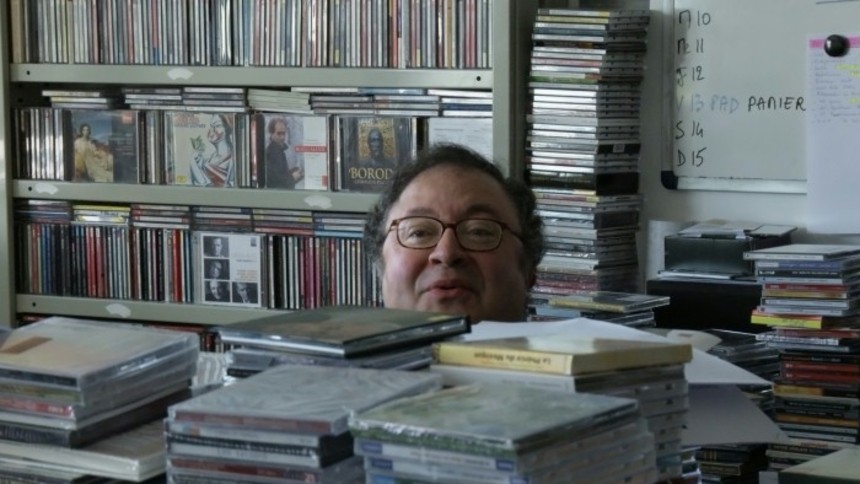 After the speeches were done and the Festival of Documentary of Santiago (FIDOCS) in Chile was officially launched, it was time for the opening film to play in front of directors, participants and press alike. The film was one that played at the Berlinale this year and is now having a theatrical run in French theaters, and as this is one of the most important Chilean festivals of the year, they always choose a film from one of the modern masters of the non-fiction filmmaking genre. This time it was the turn for the French master Nicolas Philibert (To Be and to Have, Nénnette), whose latest film takes a naturalistic and at the same time fun look at one of the most important media conglomerates of France,

Philibert's camera takes a long and deep look at the insides of the big round building that is the house of Radio France International, with its own offices, press rooms, conference rooms, recording booths, and concert halls. Many of the elements and moments that we see in the film, specially those that are not inherently connected to the making of a radio show, or at least those that are part of the modern radio that we listen to nowadays, are covered, like the recording of a short story, read out loud by performers and then mixed with sounds (radio-theater that is almost unheard of in this day and age), or a hall that reunites a chorus made up of more than 50 people, singing old German chants directed by a mannered French conductor. What is the purpose of most of the elements that are done here and there in this big compound?

I guess that's what makes Radio France such an interesting subject for a documentary, where we can go from the utilities of the press and the journalists that work for it, finding news at every corner from every source, creating a schedule for them to go out to the public, finding funny or urgent news for them to be quickly released to the public. Now, the main selling point of this documentary is that the film doesn't devolve into a chronicle of how the radio press works in France, because it goes beyond, it goes into the cultural shows, the interviewees, the singers who are promoting their new records, and writers who try to make sense of their own ouvre; two notable examples here: an interview with Umberto Eco, where he speaks perfect French; and another in which a French writer tries to speak about her ouvre, just to be interrupted by the host of the show at every point, answering the same questions he asked.

And in the end that's the main strength and at the same time the biggest failure of this documentary: its scope is so big, due to the enormity of the building and the diversity of the shows that are being made and the things that seem to be happening at every turn of a hallway, that it just becomes overwhelming. You just can't have too much of the good stuff, and the pace and the editing are great, but at the same time you can't enjoy a moment because an even better one comes afterwards, and then another, and then there's a dead spot, but it's quickly replaced; it's madness! After the movie was over and the celebratory coctel was served, I was speaking with some friends about the movie and we all came to a conclusion: We couldn't name our favorite moment because they were too many, and that, to all of us, was something bad.

The film is a pretty sight, with a bright and serviceable cinematography that doesn't take any risks in terms of portraying the reality of the place that was entered into with respect and reverence. Even though there's a tacit compromise of telling the truth about the place, even though the filmmakers were given the chance to film inside of it, it doesn't shy away from the coldness of certain journalists regarding tragedies, or the mood of others, as well as the ridiculousness of some of the shows that are playing late at night.

It's a documentary that wishes to be as deep in its beauty and scope as Frederick Wiseman's La Danse, but in the end it just falls a tad bit short.

The film will play again at FIDOCS on Saturday, June 29, closing day. Tickets are available.

Do you feel this content is inappropriate or infringes upon your rights? Click here to report it, or see our DMCA policy.
fidocsla maison de la radioNicolas PhilibertJean-François AchilliEvelyne AdamJean-Claude AmeisenArnoDocumentary