Review: The Paul Walker Vehicle VEHICLE 19 Is Fast And Thoughtful 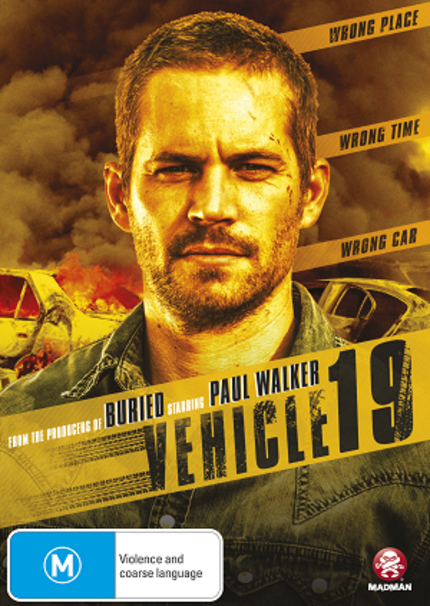 Michael Woods (Paul Walker) is eager to reconnect with his ex-wife. So eager in fact that he travels to South Africa where she works at the US embassy. As soon as he arrives he hires a car, is given the wrong one but wasting no time to meet with her he hastily accepts it. Over the course of a day Michael becomes embroiled in a crime ring, and kidnapping and murder all because of this seemingly mundane choice of wrong car, wrong time. His decisions lead to serious consequences and he must clear his name and right his wrongs before it is too late.
Walker is the only actor on-screen for the most part and this gives Vehicle 19's story a personal slant. Within the crime narrative there is an intention of getting into Michael's headspace and thanks to Walker's performance this is largely successful. Michael is an ex-con desperately seeking redemption and considering this new and foreign place, he is quickly taken out of his comfort zone. His frustration and desperation, particularly when he calls his wife can be felt. He vows to her that he has changed, but the evidence the camera reveals in his hired car suggests otherwise; mini alcohol bottles, a parole injunction and a few more tell-tale signs that Michael is still on the mend.
The film starts with a flash-forward of Michael in a highly-charged situation - a pursuit through the Johannesburg streets as police and a helicopter give chase. He remains cool and collected and it's a scene that's not far removed from Drive. The everyman fury however is something more akin to the Fast and the Furious franchise, so we have a meeting of both films in this foreign location and it's an intriguing mix.
The film really begins however with Michael's choice of car in the hire shop and his unlucky venture into the city. The camera is brilliantly positioned here and the majority of the scenes are the many angles inside the car. This is also smart because it is easier to identify with Michael as a stranger in a strange land as he passes the culture outside, reflected only through the space that his windows allow him to see. It is a colorful, bustling and oftentimes dangerous view and ramps the tension up as the story escalates into action-thriller territory because each new threat is not easily identifiable from within the car to him or to us.
The story itself is a smart one and has enough interesting reveals and crucial moments to keep the pace fresh. This is punctuated by scenes of self-reflection that do not detract from the main story and make sense given Michael's condition or situation at the time - this works and is one of the film's strongest points.
The direction by Mukunda Michael Dewil is undeniably skillful. All the right elements are mixed together to bring the film to a satisfying end, and the final shot acts as a simple reminder to viewers of the overall scope of Michael's story comparable to the rest of South Africa and the untold crime and corruption within.
Vehicle 19 is an excellent character-driven narrative that gets from point A to point B masterfully. Told from over the course of barely one day, the plot makes sense, the action scenes blister onto screen and Paul Walker is believable as Michael as he goes through some impressive character progression in a short time span. Do not be fooled by the generic action-film marketing materials, this is a much more thoughtful and intelligent film than one might assume. The elements of Drive and Fast and the Furious are appreciated but this is an original and intelligent tale on its own merits.
Vehicle 19 will open in selected U.S. theatres on Friday June 14. (See list below.) It will also be released in Australia on Blu-ray and DVD on June 19, from Madman Entertainment.
U.S. theatres:
Atlanta- AMC Southlake Pavilion - Morrow, GA
Chicago - AMC Barrington - So. Barrington, IL
Dallas - AMC Mesquite - Mesquite, TX
Houston - AMC Studio - Houston, TX
Los Angeles - AMC Ontario Mills - CA
Miami - AMC Sunset Place - South Miami, FL
New York City - AMC Empire - New York, NY
Philadelphia - AMC Neshaminy - Bensalem, PA
San Francisco - AMC Deer Valley Stadium - Antioch, CA
Washington DC - AMC Hoffman - Alexandria, VA

Do you feel this content is inappropriate or infringes upon your rights? Click here to report it, or see our DMCA policy.
Mukunda Michael DewilPaul WalkerNaima McLeanGys de VilliersLeyla HaidarianActionCrimeThriller