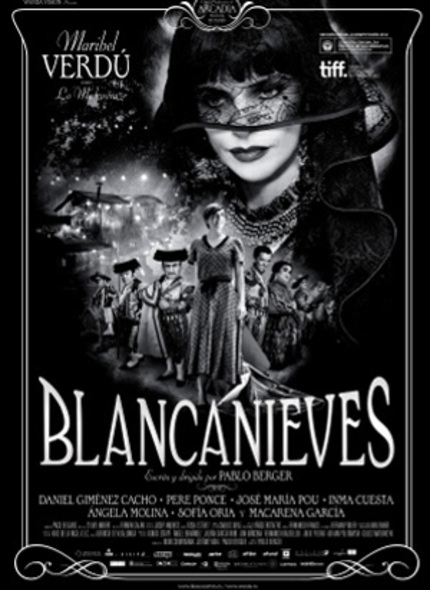 The Spanish black-and-white silent film Blancanieves premiered last year at the Toronto Film Festival and ever since it has garnered acclaim and accolades all around the world, including the highest honor at the 2013 Goya Awards. The reception in Mexico has been equally great so far, with director Pablo Berger presenting the film at the 2013 Guadalajara Film Festival and later taking home the Ariel (the so-called Mexican Oscar) for best Ibero-American film.

Shelagh M. Rowan-Legg announced here the release of the film in Canada, saying also that:

"Rather than serving as a nod to the film industry (as in The Artist), Blancanieves is a nod to the format itself, invoking the likes of Carl Dreyer, Sergei Eisenstein, and Abel Gance, and yet remaining true to its Spanish cultural roots in its grand melodrama, never shying away from the grotesque, and creating a very brave and real heroine".

However, Mexican audiences have yet to experience Blancanieves by themselves, especially the people from Mexico City where it hasn't been shown. But now the waiting is almost over as the film will be opening in Mexican cinemas on August 9, thanks to distribution company Gussi Cinema. They delayed the release, originally planned for June 21, but apparently there was a good reason to do so: Berger and one of the stars, Daniel Giménez Cacho, will visit Mexico City on August 8, courtesy of Cátedra Ingmar Bergman, the National Autonomous University of Mexico (UNAM), Gussi Cinema and the Spanish embassy in Mexico.

Berger and Gimenéz Cacho are scheduled for a conversation entitled Innovar en la Tradición (To Innovate in the Tradition), which is going to take place at the auditorium of a Mexico City museum (Contemporary Art University Museum, MUAC). A showing of the film is programmed after the conversation, at a nearby screening room. These two events in conjunct are called Blancanieves at UNAM and both are for free.

So if you're in Mexico City, or will be by August 8, you should meet Berger and Gimenéz Cacho and watch Blancanieves in the same evening. For those interested in doing that, you must enter here to check out the schedule and reserve your seat. I sure will be there!