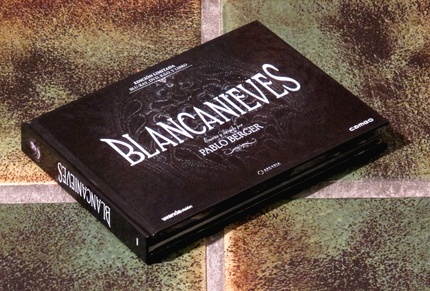 ("Special Editions" like these make the collector in me live happily, ever after...)

Cinematically, 2012 was pretty busy for Snow White: no less than four film versions of her story were released last year. From the USA we had Mirror, Mirror and Snow White and the Huntsman, from France we got Miroir Mon Amour, and from Spain we got Blancanieves.

Out of all these, it was the Spanish film which got the highest critical and audience acclaim. When it played at the International Film Festival Rotterdam it nearly won the Audience Award, with a whopping high rating of 4.6 out of 5.

It didn't get my score at that festival, because I somehow totally managed to miss the film. I intended to see it, but alas, my schedule didn't allow for it.Therefore I wanted to catch it on the rebound, meaning a DVD or Blu-ray release.

So the wait was on. Then, a few weeks ago, a fellow collector (thanks again, TheDoug!) told me the Spanish actually had a pretty spiffy edition out. Apparently this edition was English-friendly, regionfree, included the DC-soundtrack, a book... Time to check this out for a review!

Here at ScreenAnarchy, Jason Gorber appreciated the film while not fully loving it, but it was Shelagh M. Rowan-Legg who told it best in her 2012 overview. I will shamelessly just use her words from that article to describe the film:

Pablo Berger spent nearly 10 years working on this, his tribute to European silent film, and it shows with a story dripping in sensuous, gorgeous wonder. A black-and-white silent reworking of the Snow White fairy tale, Berger transports us to 1920s Spain, populated by matadors, black lace, flamenco dancers and the carnivalesque. Rather than serving as a nod to the industry, the film is a nod to the format itself, invoking the likes of Carl Theodore Dreyer, Sergei Eisenstein, and Abel Gance, and yet remaining true to its Spanish cultural roots in its grand melodrama, never shying away from the grotesque, and creating a very brave and real heroine.

The always graceful and yet fiercely intense Maribel Verdu is clearly having a glorious time as the evil stepmother, and there are several self-reflexive, tongue-in-cheek moments. Alfonso Villaronga's score is exquisite, perfectly capturing both the big and the small moments, and the cinematography takes advantage of modern technology to find the nuances of grey between the black and white. Forget that 'other' silent film; Blancanieves is the true tribute to the form, an homage, as well as far surpassing it.

Truer words have rarely been written, even on this here site. And, as I think everyone knows the Snow White story well enough, let's continue on to the discs!

This review is for the Spanish Limited Edition released by Cameo Media. And let it be known that, indeed, this edition contains English subtitles and is region-free. For those demanding an English dub: it's a silent movie so... you get music and that's it. If not for the intertitle cards you wouldn't even need subs either.

The edition is housed in a 50-page hardcover book. The inside covers hold the three discs: the Blu-ray edition, the DVD edition, and the CD-soundtrack of the film.

Starting with the Blu-Ray and the DVD: these are almost identical. The Blu-ray has more extras but the film itself is shot a bit soft and grainy on purpose, to get the 1920's look. There are some scenes of great sharpness and with those the Blu-ray wins, but for the most I'd be hard pressed to tell the two images apart.

For sound, the two discs have an HD-DTS 5.1 track versus a DTS 5.1 track. Again, the Blu-ray probably wins here but the difference is slight.
Both tracks are ironically enough probably superior to the stereo on the CD. Audiophiles, feel free to correct me!

Speaking of the CD: this contains pretty much the entire soundtrack of the film, with several classical pieces on it as well as Alfonso de Vilallonga's fantastic score.

Then there are the extras and there are a lot of them. The biggest are a 28-minute "making of" documentary, and a whopping 52-minute recording of the press conference held at the San Sebastian Film Festival. But there are a lot of smaller pieces as well, ranging in length from 90 seconds to five minutes, and these cover photoshoots, location visits, premiere evenings, sound recording sessions...

Unfortunately none of these extras have English subtitles on them, a pity as a lot of the material consists of people talking. Thankfully my wife knows Spanish.

Finally, some attention for the 50-page book. This is a very nice-looking collection of photos, interviews and articles about the film, and I have been told it is the same material as used for the original press map for the film, during its international festival run. It is good stuff, but do know it's all again in Spanish, though.

All in all this is a very, VERY nice set to own, and relatively low-priced too (it can be found for less than 16 Euro, or about 20 USD).

I may have missed my chance to rate the film itself at the International Film Festival Rotterdam, but hereby I rate this edition: "Highly Recommended!" 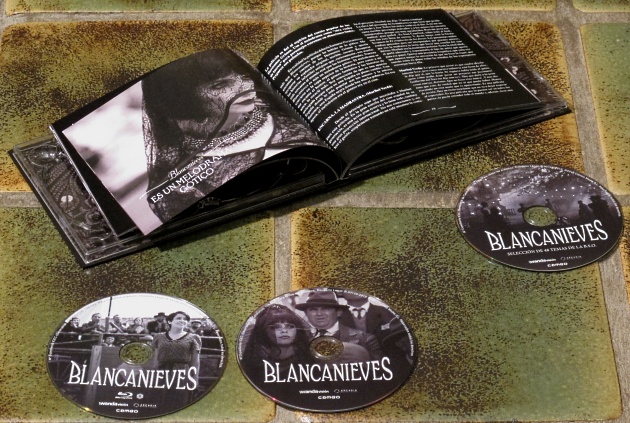 Do you feel this content is inappropriate or infringes upon your rights? Click here to report it, or see our DMCA policy.
Pablo BergerSnow WhiteOsvaldo DaicichShort